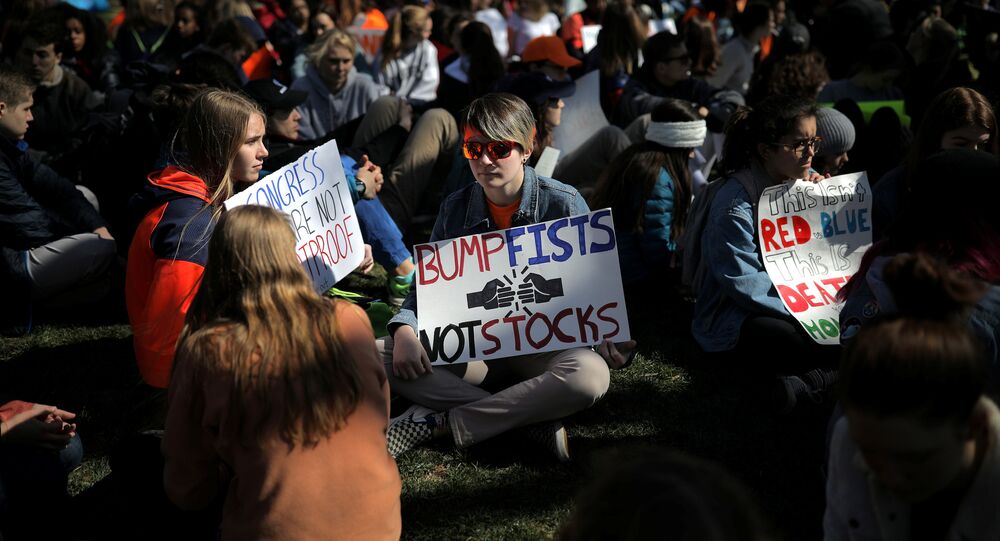 WASHINGTON (Sputnik) - Some 300 high school students gathered in front of the White House in Washington, DC to protest gun violence in US schools, a Sputnik correspondent reported.

The event, dubbed National Day of Action Against Gun Violence in Schools, was organized by a group of activists who said they are calling for higher quality of education in public schools.

READ MORE: US Footballer May Have Foiled School Shooting Spree

The demonstration marks the 19th anniversary of the Columbine High School massacre in the US state of Colorado, where two high school students shot and killed 13 people and injured 36 more.

Young people have gathered in front of the White House. Not a sound, as names of gun violence victims are read aloud… #ENOUGH #NationalSchoolWalkout pic.twitter.com/z7u8hI9U6s

Many of the participants in Friday’s protest are wearing orange shirts, hats and bandages, and hold placards that read "Enough"; "Arm teachers with pencils, not guns"; "No more silence, no more gun violence"; "Prayers can't stop bullets" and others.

Students in other cities across the United States have joined the protest, according to reports.

#HappeningNow: Hundreds of Chicago students pour into Grant Park for today’s #NationalSchoolWalkout against gun violence marking 19 years since the Columbine High School massacre, with many chanting, “This is what democracy looks like!” pic.twitter.com/35QgqRrRza

Earlier in the day, one person was injured in a shooting at a high school in Ocala, Florida, according to the Marion County Sheriff's Office. A suspect has been arrested.

On the day of the #NationalSchoolWalkout to protest gun violence, there was a shooting at Forest High School in Ocala, not too far from us.

This is why we walked out. It keeps happening.

© AP Photo / Gerald Herbert
Massachusetts School Hires AI to Prevent Mass Shootings
In February, students participated in a national walkout after the mass shooting in Parkland, Florida, when a former student opened fire in a high school and killed 17 people. The gunman legally purchased the semi-automatic rifle he used in the assault on the high school.

The Second Amendment of the US Constitution guarantees the right of Americans to keep and bear arms.

US Footballer May Have Foiled School Shooting Spree