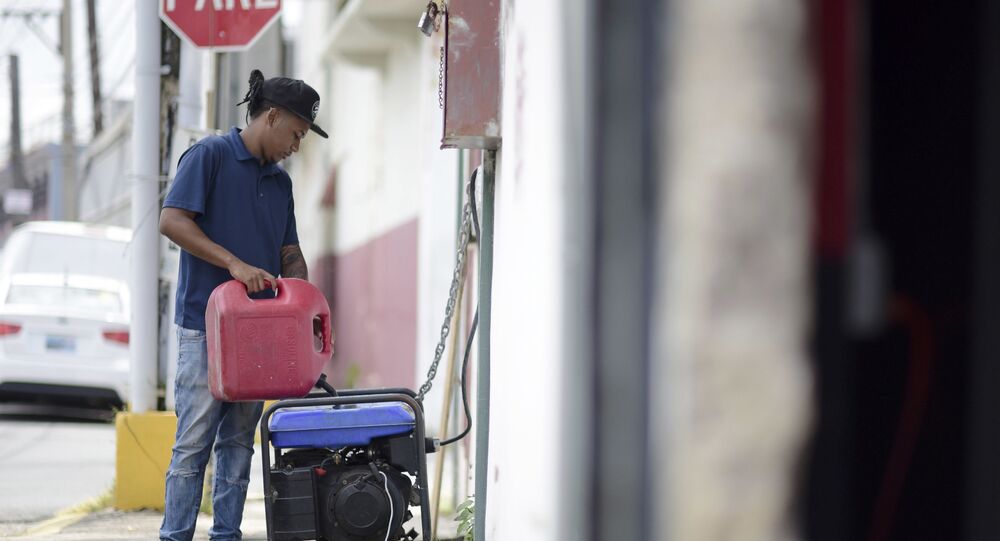 On Wednesday, the entire island of Puerto Rico lost power when a toppled transmission line caused a complete blackout. The power outage comes just one week after a tree fell on a major power line in the territory’s capital of San Juan, plunging 870,000 people, nearly 40 percent of the island’s population, into darkness.

According to the Puerto Rico Electric Power Authority (PREPA), the total power outage occurred around 10 a.m. Wednesday and may take up to 36 hours to restore.

PREPA's interim director, Justo González, also announced Wednesday that Cobra Energy, a US private contractor, was responsible for the blackout, as it struck the transmission line with a bulldozer. Cobra Energy was awarded a $200 million contract to repair Puerto Rico's power grid in the aftermath of Hurricane Maria in September.

In a Wednesday phone interview with the New York Times, González said that the subcontractor has been fired because of the incident.

"I'm angry. I give the people of Puerto Rico my word: We are going to restore to every last house," he told the Times.

Marla Pérez, an associate professor at the University of Puerto Rico, told USA Today that she was working from her home in the municipality of Mayagüez when the power went out.

​"My first thought was here we go again. This is the second blackout in less than a week. The service is not reliable," Perez added.

Cathy Kunkel, an energy analyst with the Institute for Energy Economic and Financial Analysis, claims it's "worrisome" that the "grid is so fragile" with hurricane season once again around the corner.

"This is all very worrisome, obviously, as we approach another hurricane season. The grid is so fragile and they're just barely able to get the lights back on," Kunkel told USA Today recently. "Until PREPA is back on a more stable financial footing, it seems like they are continuing to have major problems with reliability."

Earlier this month, the US Department of Energy reported that more than 61,000 utility customers are still without electricity seven months after the hurricane.

Angel Figueroa Jaramillo, the head of the electrical workers union in Puerto Rico, claims that PREPA is deliberately restoring services at a slow rate so Puerto Rican Governor Ricardo Rosselló can justify privatizing the company.

"In addition to the $2.4 billion that has been spent, we continue paying the consequences," Jaramillo said at a televised news conference on Wednesday.

"People who came here with business in mind did what they could, quote-unquote ‘finished,' and then left. This is all a process on how to dismantle the electric authority to justify privatization of the most important service in our country."