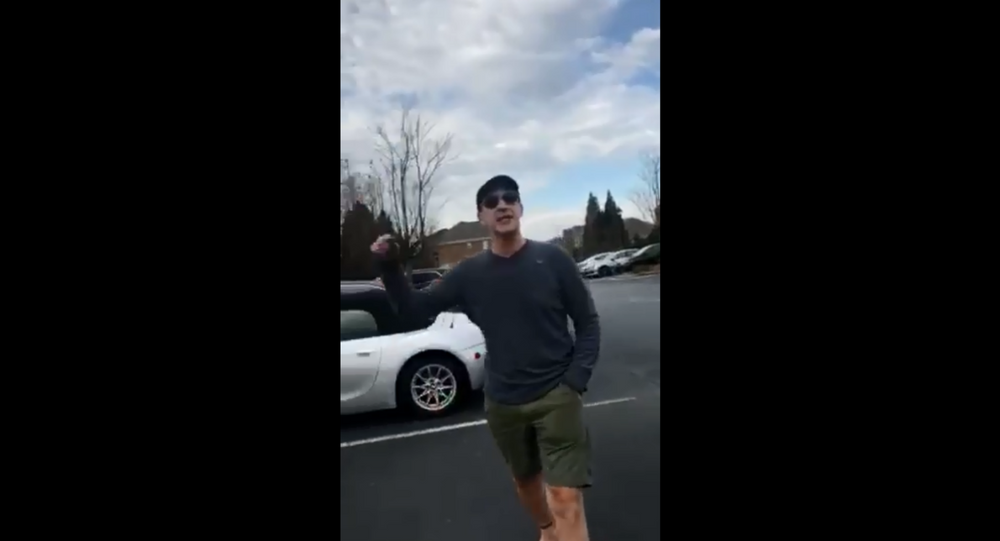 Eric DeKeyzer, a white man from the US state of Georgia, was arrested by the Johns Creek Police Department earlier this month after he hurled racial slurs at Terrence Stover, a black high school teacher, during a road rage incident.

Stover, who managed to record the moments after he pulled over into a shopping mall, shared a snippet of the altercation on April 11 on Facebook. The incident occurred April 6.

"Shut the f**k up," DeKeyzer tells the teacher before explaining that he'd called Stover a n***er because he "knew it would get a f**king rise out of [him] because [he's] acting like one."

In the Facebook post accompanying the video, Stover noted that prior to the parking lot confrontation, DeKeyzer had repeatedly and aggressively tailgated him.

"I was driving in Johns Creek area, on my way to an appointment. About halfway there, I observed a man aggressively driving in traffic," Stover wrote. "He slid his vehicle behind mine and started riding my bumper. Then he passed me on the driver's side and flipped me off. He threw an object out his window in my direction and screamed obscenities at me."

"I shook my head in disbelief and continued on my way. Then, I looked in my rear view again, only to see the same guy swerving out of a turning lane and start riding my bumper once again," Stover continued.

Acknowledging that out-driving DeKeyzer wasn't his best option, Stover explained in the post that it was best for him to park at a nearby shopping mall "to ensure [his] safety."

"Looking back at what happened next, I realized that, had I not practiced the patience I teach my students, I might have ended up being the subject of a tragic news story," he stated. "It would have been a story with racial overtones because I am a large Black man, over six feet tall and over 350 pounds, and the aggressive driver was a middle aged White man."

Speaking to local TV station WSB Atlanta, Stover stressed that he did nothing to provoke DeKeyzer's behavior.

"I teach my kids not to fight unless you're defending yourself," Stover told the station. "I just pray people think before they do."

An officer with Georgia's Johns Creek Police Department later arrived on the scene and arrested DeKeyzer for disorderly conduct after bystanders saw the altercation and called it in. DeKeyzer, who was being held at the Alpharetta Jail, has since been released from police custody, WSB Atlanta reported.