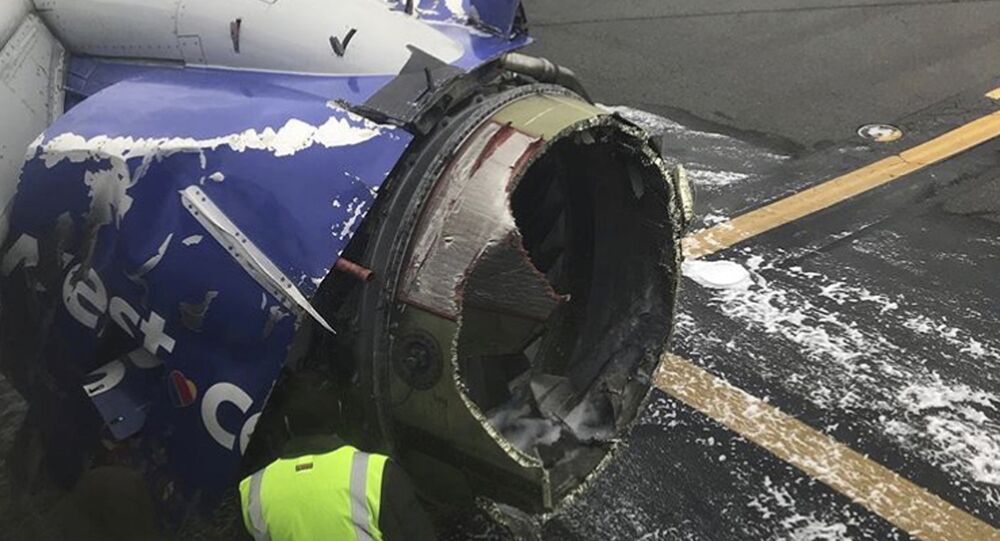 One person died after Southwest's emergency landing Tuesday, the US National Transport Safety Board announced a few hours after the incident. Several other people were injured when the plane's engine malfunctioned dramatically, causing a window to break and the cabin to depressurize. The plane made an emergency landing in Philadelphia.

According to NBC Philadelphia, a passenger was "partially sucked out" of the cabin on flight 1380 when a piece of the plane's engine broke a window, causing the aircraft to depressurize. The victim was reportedly rushed to a Philadelphia hospital upon landing. Another passenger reportedly had a heart attack, and a third struck by shrapnel.

The passenger killed, Jennifer Riordan, was a mother of two and a Wells Fargo bank executive from New Mexico. The New Mexico Broadcasters Association stated that Riordan was a University of New Mexico graduate and a former board member.

Her death was shared by the assistant principal of the Albuquerque Catholic School where Riordan's two children are students.

In an email to parents on Tuesday, Assistant Principal Amy McCarty wrote that "the family needs all the prayers we can offer," AP reported. The cause of Riordan's death has not been revealed.

NTSB Board Chairman Robert Sumwalt announced Tuesday that the engine that broke down will be thoroughly examined.

The flight from New York's LaGuardia Airport was diverted to Philadelphia International Airport, where it made an emergency landing around 11:30 a.m. local time Tuesday. The plane's intended destination was Dallas' Love Field.

There were 143 passengers and five crew on the plane when it made the sudden landing. Marty Martinez, a passenger on the flight, posted a live Facebook video of himself "recording his last moments."

"Something is wrong with our plane! It appears we are going down! Emergency landing!! Southwest flight from NYC to Dallas!!" Martinez captioned his video.

He told CBS News that there was "blood everywhere" on the aircraft.

"We were probably going down for 10 to 15 minutes," Martinez told NBC News. "And of course everyone is freaking out, everyone is crying. It was the scariest experience."

In a Tuesday statement, Southwest said, "We are in the process of gathering more information… Safety is always our top priority at Southwest Airlines and we are working diligently to support our customers and crews at the time."

Philadelphia International Airport tweeted Tuesday that, "Flight from LGA [LaGuardia] to Dallas Love Field landed safely at PHL and passengers are being brought into the terminal. Flights are departing and arriving but passengers should expect delays. Check flight status with your airline."

Photos and video captured by passengers from inside the cabin and posted on social networks showed a significant plane damage, with part of the covering from its left engine ripped off and a window destroyed.

According to the US Aviation Safety Network, no people died in crashes of commercial jets on US soil in 2017, for the fourth year in a row.

A late 2017 report by the Federal Aviation Administration found that Southwest Airlines' suffered from a degraded management culture when it came to maintenance, and that maintenance staff, rather than being supported in their jobs, were coerced toward positive assessments of planes and infrastructure. The FAA has also warned that corrosion is a problem on Southwest aircraft.

Southwest CEO Gary Kelly responded to the death in a video statement later Tuesday afternoon, calling it a "tragic loss" and saying "This is a sad day, and on behalf of the entire Southwest family, I want to extend my deepest sympathies for the family and the loved ones of our deceased customer." He pledged Southwest's support to the victim's friends and family, and said the company was cooperating fully with the NTSB in investigating the engine failure.

He also commended the flight crew for their response to the emergency, as well as the team on the ground in Philadelphia.  Kelly also told media that Tuesday's incident was the first one in the airline's 51-year history. There were no issues with the aircraft's engines, which were inspected on Sunday. Kelly has reached out to the victim's family but was unable to reach them.

Plane Lands in Moscow Airport After Losing Part of Its Fuselage

Pleased to Meet You Halfway: Kim Jong Un May Not Have a Plane That Can Reach US