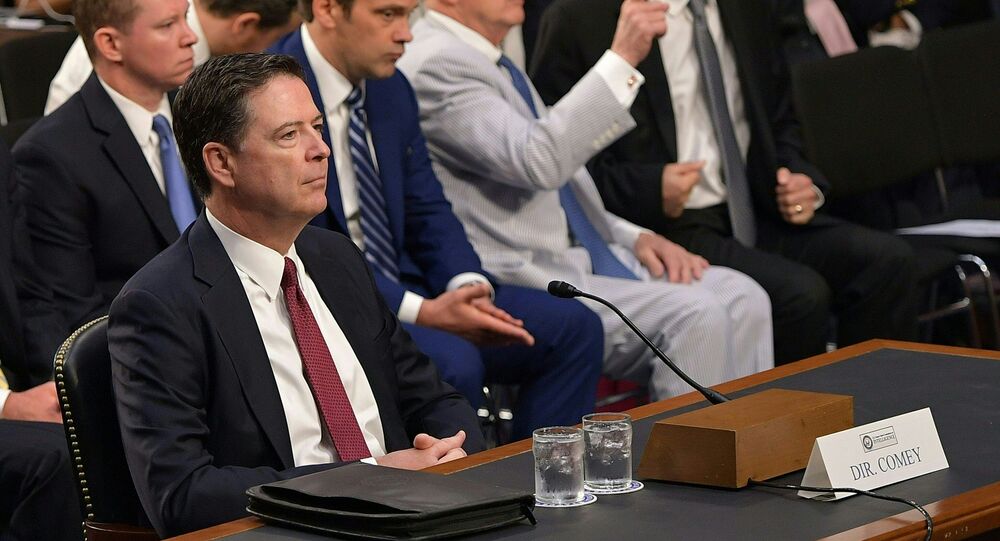 The war of words between US President Donald Trump and former FBI director James Comey has been in high gear as the latter has been promo-ing his freshly minted book “A Higher Loyalty: Truth, Lies, and Leadership.”

Former FBI head James Comey, now being referred to as the “leaking, lying slime ball” by the US president, said that Trump’s calls to put him in jail were “not normal” and “not ok.”

“The president doesn’t get to decide who goes to jail. That is not normal. That is not okay. First of all, he’s just making stuff up. But more importantly, the President of the United States is calling for the imprisonment of a private citizen, as he’s done for a whole lot of people who have criticized him. That is not acceptable in this country,” Comey said in a “Good Morning America” interview.

Comey: "The President of the United States is calling for the imprisonment of a private citizen, as he’s done for a whole lot of people who criticize him. That is not acceptable in this country." (via GMA) pic.twitter.com/lLISFuf4rE

Social media users couldn’t stay on the sidelines of this spat, with many considering Comey an incompetent “liar” and supporting POTUS’ appeals to “lock him up”:

COMEY IS A TRAITOR AND NEEDS TO BE LOCKED UP!

Comey only announced a re-opening of the Clinton email investigation prior to the election because he believed she was polling well enough to still win and didn't want whistle-blowers busting him after the election.

So, "Mr Honest," made a totally dishonest, calculating move.

The msm media luvs putting felons on there show and comey is one of them!!!

Others were creative enough to come up with a batch of memes on the occasion:

…and lashed out at Trump instead:

Buy Jim Comey's book. He's a good and honest man who tells the truth. He is brave to speak up. I support Jim Comey.

The rest of the story:
When the top FBI administration goes rogue, they need to be prosecuted.

Earlier, POTUS took to his favorite social platform to express his indignation over Comey’s book, which touches upon a wide range of matters, including Trump’s presidency.

In addition, he denounced the ex-FBI chief who claimed in congressional testimony last year that he had shared copies of classified memos about his meetings with the president with a friend so that he could leak them to reporters.

The big questions in Comey’s badly reviewed book aren’t answered like, how come he gave up Classified Information (jail), why did he lie to Congress (jail), why did the DNC refuse to give Server to the FBI (why didn’t they TAKE it), why the phony memos, McCabe’s $700,000 & more?

Unbelievably, James Comey states that Polls, where Crooked Hillary was leading, were a factor in the handling (stupidly) of the Clinton Email probe. In other words, he was making decisions based on the fact that he thought she was going to win, and he wanted a job. Slimeball!

James Comey is a proven LEAKER & LIAR. Virtually everyone in Washington thought he should be fired for the terrible job he did-until he was, in fact, fired. He leaked CLASSIFIED information, for which he should be prosecuted. He lied to Congress under OATH. He is a weak and…..

….untruthful slime ball who was, as time has proven, a terrible Director of the FBI. His handling of the Crooked Hillary Clinton case, and the events surrounding it, will go down as one of the worst “botch jobs” of history. It was my great honor to fire James Comey!

Trump has also lashed out at fired FBI Deputy Director Andrew McCabe, who had authorized the release of sensitive information to reporters, misled investigators about the bureau’s investigation into the Clinton Foundation and “committed many crimes” along with Comey.

Comey, in turn, responded to Trump’s verbal attack in an interview with ABC News’ anchor George Stephanopoulos, suggesting that the US president was “morally unfit” to hold office.

James Comey was forced out as FBI Director in May 2017, as Donald Trump allegedly followed recommendations by Attorney General Jeff Sessions and Deputy Attorney General Rod Rosenstein. However, later the president insisted that he had had plans to fire Comey over the mishandling of the probe into Hillary Clinton’s private server and e-mail scandal, “regardless” of any recommendation.