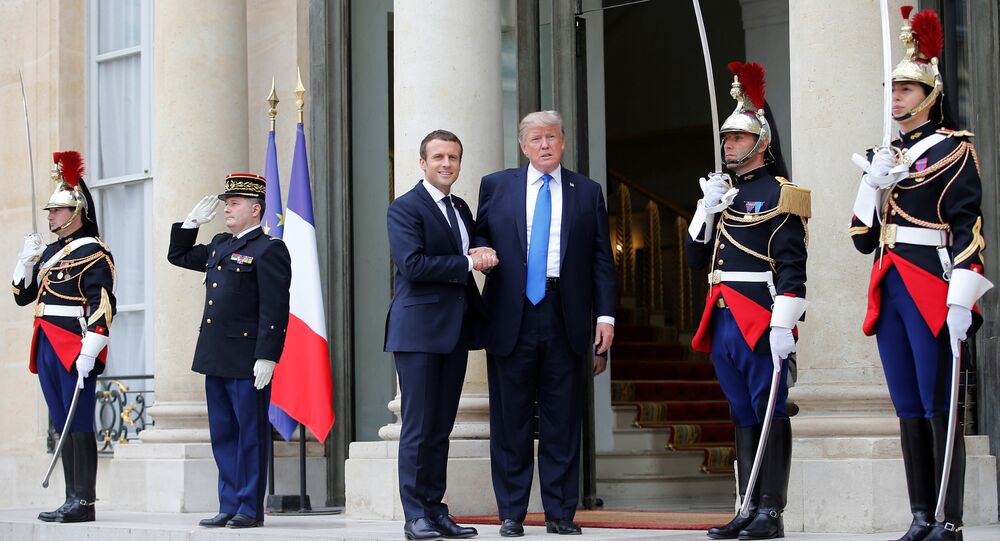 WASHINGTON (Sputnik) - US President Donald Trump and French President Emmanuel Macron agreed to coordinate a joint response to the alleged use of chemical weapons in Syria, the White House said after the two leaders’ telephone talks.

On Saturday, several media outlets, citing Syrian militants, accused Damascus of using chemical weapons in the city of Duma in Syria's Eastern Ghouta. Trump's Homeland Security Advisor Tom Bossert said on Sunday that he did not rule out military actions against the Syrian government in connection with the reports.

© REUTERS / Kevin Lamarque
Paris: Macron, Trump Exchange Data 'Confirming' Chemical Weapons Use in Douma
"President Donald J. Trump spoke today with President Emmanuel Macron of France. Both leaders strongly condemned the horrific chemical weapons attacks in Syria and agreed that the Assad regime must be held accountable for its continued human rights abuses. They agreed to exchange information on the nature of the attacks and coordinate a strong, joint response," the White House said.

On Sunday, nine out of 15 members of the UN Security Council have urged the convocation of an emergency meeting to discuss reports about alleged use of chemical weapons in Syria.

Russia convenes on Monday a separate meeting of the UN Security Council to discuss threats to international peace and security.