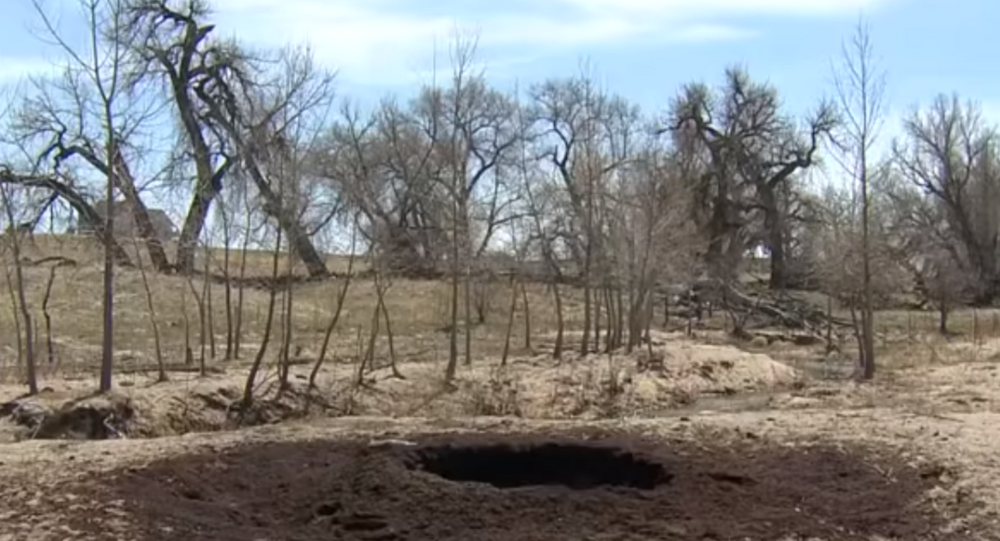 Anadarko Petroleum revealed on Thursday that one of its gas pipelines was the culprit behind a mysterious crater that turned up on a Colorado rancher's farm.

Speaking to local Denver station CBS 4, landowner Joanna Meston told the outlet that she had only noticed the bubbling crater after one of her bulls kept wandering by a nearby creek that runs through her estate.

"We gathered up our cattle a few weeks ago to sort them and sell some of them and one of the bulls was missing," she said. With the bull staying away from the herd for several days at a time, Meston became concerned and decided to check out the the creek to figure out what was keeping his attention.

"I was coming down from that hill and saw this depression here," Meston recalled. "At first I thought it was a hole he dug because sometimes the bulls will do that when they are mad. I got closer and it's this hot spring."

"You can smell the sulfur, and you can tell that there's heat and it looks like the material around it is burnt," she added.

Worried, Meston tapped into her inner detective and conducted some research.

"I went online and started looking things up and the best thing I could find that sounded like it was a mud pot, similar to what you find up around Yellowstone," Meston told the station, before noting that she also thought the crater might've been caused by a pipeline.

"There are natural pipelines… and a gas collection area is only about a quarter mile to the west. So it's possible there could be pipelines pretty close to this thing," she explained.

Meston wasn't the only one stumped by the mystery. The Colorado Geological Survey also found themselves scratching their heads.

"As far as all are concerned, this is a unique event," Paul Morgan, an official with the survey team, told CBS 4. "None of the engineers or geologists have seen such a crater before."

Unable to solve the mystery, Meston and the Colorado Geological Survey wound up calling Anadarko Petroleum, the company that owns the nearby pipelines. As luck would have it, the "mud pot" was caused by a broken four-inch gas line.

Jennifer Brice, the spokesperson for Anadarko, explained to the station that the leak came from a gas gathering line that moves gas from a wellhead to a collection point. The pipeline has since been shut down in order to make repairs and "mediate the damage," she said.

At Least One Dead, 6 Injured in Shooting in US State of Colorado - Reports