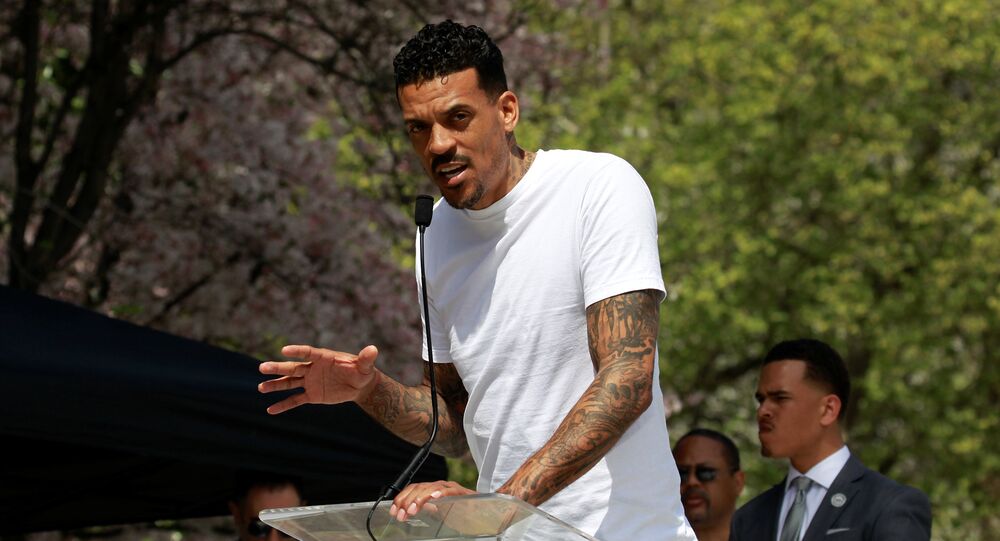 Former NBA player Matt Barnes announced that he is going to launch a scholarship fund in the name of the two sons of Stephon Clark, the unarmed black man killed by police in Sacramento, California, March 18. Barnes made the announcement at a rally he organized in the aftermath of the shooting Saturday.

New York Daily News journalist Chuck Modiano, who focuses on sports and the Black Lives Matter movement, joined By Any Means Necessary hosts Eugene Puryear and Sean Blackmon on Radio Sputnik to talk about the intersections of activism and sports.

​"In some ways, in recent years, he may be bringing it to the next level," Modiano said of Barnes' recent foray into activism. "That's not to diminish Vince Carter and other people who've had t-shirts that said ‘accountability' — and that's the key word, accountability… But Matt Barnes is organizing! He was actually trying to bring players! He was down on the street with the protests in solidarity, he's organizing," Modiano said.

"[A]s far as to be at a protest and as vocal as Matt Barnes has been, you know I think this might be the next level."

Protests have blocked entrances during two of the last three games of Sacramento's NBA team, the Kings. Since then, owner Vivek Ranadivé and former guard Doug Christie met with a protest leader and announced an education fund for Clark's children, a partnership with an activist group formed in Clark's honor and an event that took place Friday attended by Christie and current Sacramento Kings players Vince Carter and Garrett Temple.

"You talk about the owners; well, first the owners had said some pretty heartfelt words. You never know, as you said, whether it's PR or not for sure. But then they come back and they've actually formed a partnership with Black Lives Matter Sacramento and part of the Build. Black. Coalition to give college scholarships," Modiano noted.

Barnes played 14 seasons with the NBA and won an NBA championship in his last season, 2017. Barnes grew up in Sacramento and played for the Kings between 2002 and 2006.

Barnes was joined on stage at the rally by Clark's family, including his fiancee, grandmother, uncle and two sons. Barnes told a crowd of between 200 and 300 that he's "in the process of starting a Clark boys scholarship fund, to make sure these boys go to college." He said that once the fund is up, "we're gonna carry it nation-wide, to provide kids who lost their fathers to unfortunate stuff like this a chance to still come up and be productive men."

​Clark, 22, was killed by police in his grandmother's backyard by Sacramento police on March 18. "Show me your hands. Gun, gun, gun," an officer shouted before each of the two officers unloaded 10 shots in Clark's direction. Clark was struck seven times from behind and once in the side, and died.

The autopsy contradicts the department's assertion that Clark was facing officers and moving towards them when he was shot. Authorities said that Clark was holding a tool bar, but later admitted it was just a cellphone, which can be seen in the video of the shooting.

​The shooting appears to violate the Sacramento Police Department's use-of-force rules, according to the New York Daily News.

Protests have been ongoing in Sacramento since the killing. After the rally organized by Barnes Saturday, demonstrators marched and held a vigil later in the night. Uproar has only intensified since then, after a police van was caught on camera ramming a protester and driving away.

Sacramento Sheriff Scott Jones stated Monday that "paid protesters" had infiltrated the vigil that night, journalist Blake Montgomery reported. "You'll notice the same cadre of protesters at every protest, sometimes in other states. We have a very robust intelligence platform that we rely on to minimize any incidents," Jones said, but did not indicate who he thinks is paying the protesters or what incidents were minimized Saturday night with the help of their unnamed intelligence platform.

Violent Protest in Sacramento, Clinton's 'Feminism', and Police at Pride