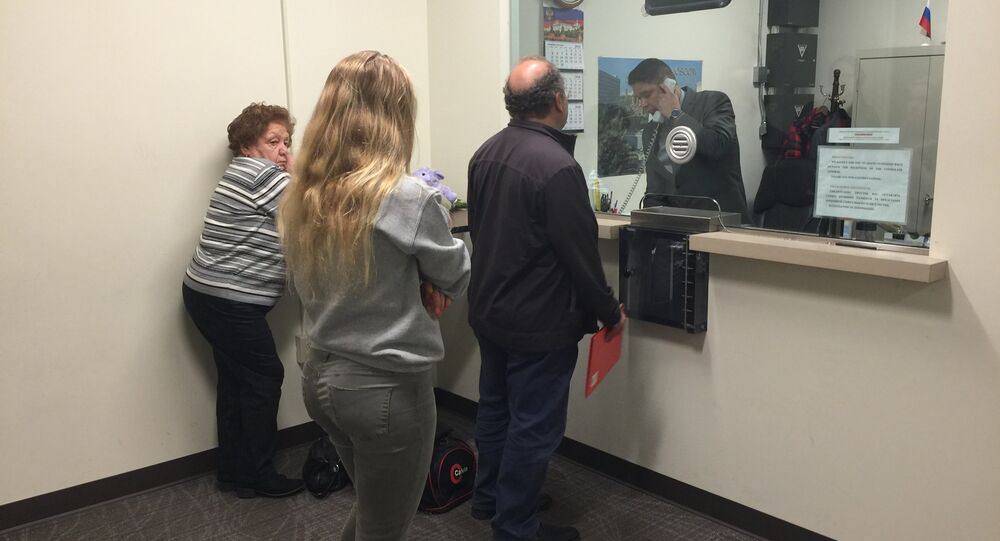 MOSCOW (Sputnik) - The Congress of Russian Americans (CRA) in an open letter to US President Donald Trump expressed its regret over the current state of Russian-US relations and pointed to discrimination that Russian Americans have started facing in the country.

“We do not support the present course of Russian-American relations. It cannot lead to anything good. It has become a serious obstacle to constructive dialogue. Moreover, this odious rhetoric against Russia breeds hatred toward all Russians. Five million Russian-Americans living in this country have to bear the brunt of the consequences of these reckless words and actions. Russian-Americans have come to face serious discrimination,” the letter, issued on Friday, read.

© REUTERS / Lindsey Wasson
Russian Envoy to US: National Flag Will Be Fluttering Above Closed Consulate
The organization also expressed its deep regret over the US expulsion of Russian diplomats and closure of the country’s consulate in Seattle saying that the decision had further restricted Russian Americans’ access to consular services. It also noted that more visa applications from Russians were rejected than ever before.

The Congress stressed that it was premature to blame the poisoning of former GRU colonel Sergei Skripal and his daughter in the United Kingdom on Moscow since the investigation had only started.

READ MORE: Russian Consulate in Seattle Closes on US Order

The letter also reminded Trump about his electoral pledge to improve relations with Russia and urged the president to prevent "the new Cold War from spiraling" and initiate a dialogue.

The letter stressed that the “collapse into the abyss of russophobia” did not serve the interests of the United States either, noting that the more tenuous the links between Moscow and Washington turn out to be, “the more imperiled peace on the entire planet becomes.”

© Sputnik / Ramil Sitdikov
Dangerous for US to Treat Russia as Opponent Due to Nuclear Arms – Ex-Ambassador
Ties between the two countries reached a new low this week after the United States announced the expulsion of 60 Russian diplomats and the closure of its consulate in Seattle as a sign of solidarity with London on the Skripal case.

Russia has repeatedly and strongly denied claims of its involvement in the poisoning of former Russian agent Skripal and his daughter in Salisbury. It responded to the US move by ordering an equal number of US diplomats out and told US authorities to close the consulate in St. Petersburg.