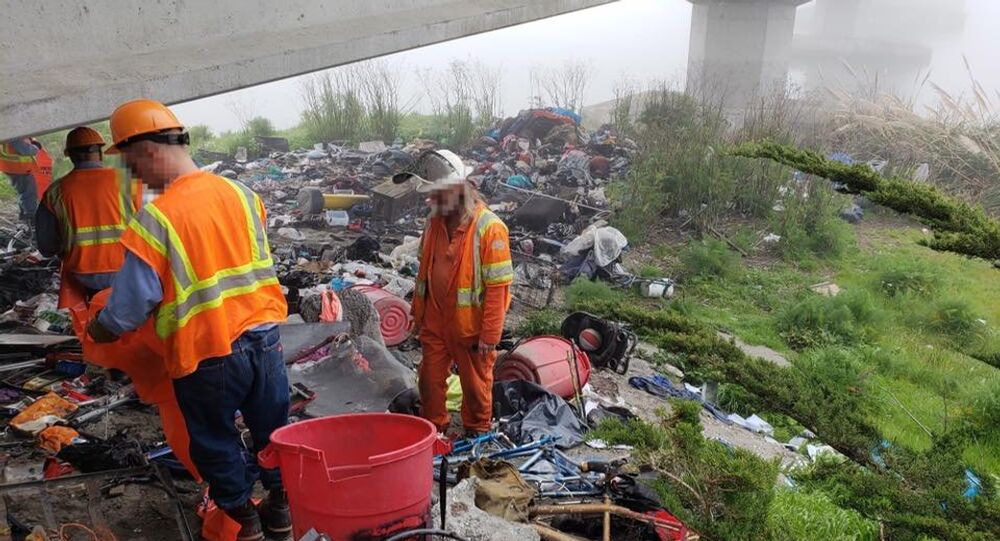 Inmates at the Humboldt County Jail in Eureka, California, cleaned up more than 1,300 pounds of trash from a homeless encampment in one a work day - trash that was packed with hypodermic needles.

The Humboldt County Sheriff's Office posted on Facebook March 29 that their "inmate work crew," specifically a division that does work for the California Department of Transportation, cleaned up a "large homeless encampment located on Indian Island under the Christensen Memorial Bridge."

​The post says that the crew found a "large amount" of metal and hypodermic needles. It ends with the conclusion that "the inmate work crew is a great opportunity for non-violent offenders to contribute to the bettering of the community while in custody."

Sputnik spoke with Jared Ware, a freelance reporter focusing on prisons and host of the Beyond Prisons podcast, about the use of prison labor.

"They do a lot of jobs that basically nobody else wants to do. Maybe we're increasingly aware [of it] because of social media, of how much they're used to sort of deal with the least desirable labors that we have within our system," Ware said.

The use of forced prison labor has fallen under increased scrutiny since a nation-wide prison strike, or mass work stoppage, was held in September of 2016. More recently, a prison strike in Florida, dubbed Operation PUSH, has been ongoing since January 15 of this year.

​The demands of the Operation PUSH organizers specifically challenge the notion that "work crews" are a good opportunity for inmates. The first of the three primary aims of the protest is for more pay for prisoners' work instead of shortened sentences, which they say leave inmates broke and unprepared for the outside world.

Other demands include an end to price gouging in canteens, where prisoners are allowed to purchase items such as deodorant and extra food to supplement the small food portions they receive during meals. Florida prisoners pointed out in a manifesto that a $4 package of soup would cost $17 if purchased in prison.

"I think that when you look at counties and how they use the work of people who are jailed or imprisoned or undocumented immigrants that are held in immigration detention centers, all this labor involves often encountering hazardous waste, bodily fluids and you know, things people would generally rather not deal with," Ware told Sputnik.

California has long used prison labor to deal with a wide variety of issues. Last year's devastating wildfires in the Sonoma Valley, California's wine country, were pushed back by inmates working as firefighters. They made $1 an hour and were sometimes forced to work for three days straight, Mashable reported. Inmates have been forced to work on the front lines in California's battle against wildfires since the 1940s.

The encampment was located on Indian Island, famous for being the site of a massacre of about one hundred Wiyot men during a ceremony in 1860 by European settlers looking for gold. The three-day World Renewal Ceremony was performed again for the first time in 150 years in March 2014 on the Island.

One Inmate Killed, 5 Injured During Prison Riot in US City of Folsom