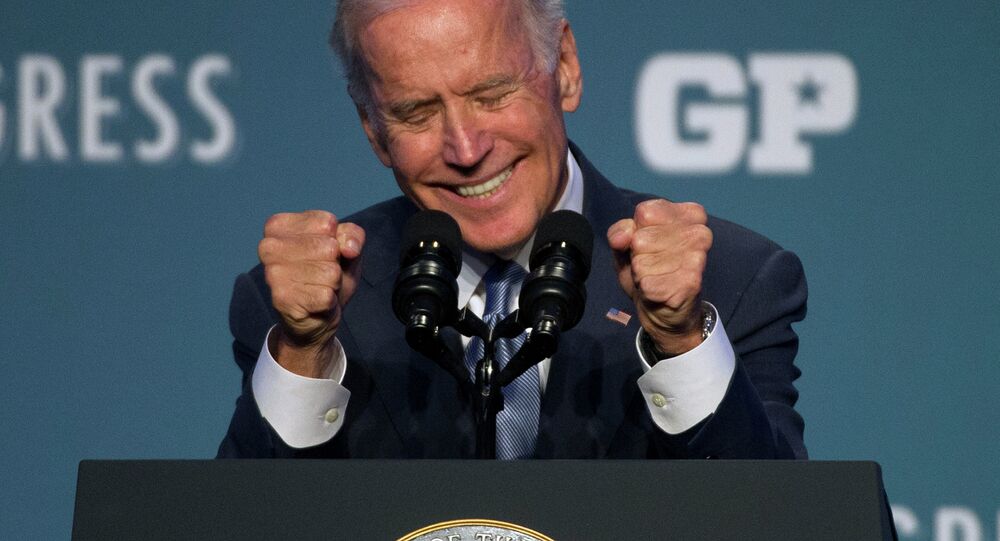 Former US Vice President Joe Biden said he regrets saying he would “beat the hell” out of US President Donald Trump if the two had been in high school together and Biden had heard some of the president’s more offensive remarks about women.

"I shouldn't have said what I said," Biden said in an interview with Pod Save America on March 28.

"Now, the idea that I would actually physically get in a contest with a president of the United States or anybody else now is not what I said," Biden told the podcast. "It is not what this was about, but I should have just left it alone."

© REUTERS / Jonathan Ernst
Trump Causes Storm on Twitter as He Takes 'Crazy' Joe Biden Down a Peg
Biden made his threats earlier this month during a rally at the University of Miami, citing a video recording of Trump making lewd comments about women back in 2005.

"A guy who ended up becoming our national leader said, ‘I can grab a woman anywhere and she likes it.' They asked me if I'd like to debate this gentleman, and I said no. I said, ‘If we were in high school, I'd take him behind the gym and beat the hell out of him,'" Biden proclaimed during the rally.

Trump reacted to Biden's speech on Twitter, saying Biden is trying to act like a "tough guy."

​This battle of the titans might be closer than either of the potential pugilists will admit: a Public Policy Polling survey found that 37 percent of voters thought 75-year old Biden would triumph over 71-year old Trump in fisticuffs; 32 percent favored Trump in such a matchip and 30 percent had no opinion.

WATCH: Joe Biden Says Europe 'Wanted No Part of the Sanctions on Russia'