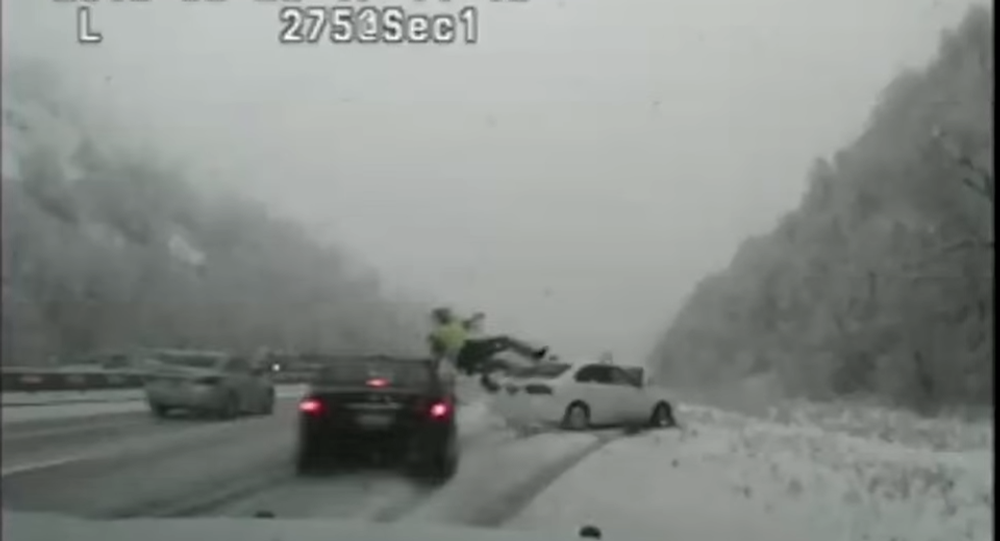 Jaw-dropping video released Tuesday by authorities in Utah shows a state trooper being hit by a car and flung high in the air as he walks to assist a stranded vehicle in the snow.

According to the Utah Department of Public Safety, Sergeant Cade Brenchley was attempting to help a stranded driver in Sardine Canyon when the incident occured Sunday.

​Brenchley told the Salt Lake Tribune that he remembers stepping out of his car and then "everything was black."

"It's miraculous, though, that this is all I have, considering what we saw [on the video]," Brenchley said during a Tuesday news conference at Logan Regional Hospital, where he is currently covering, the Salt Lake Tribune reported.

"We've got to pay attention to what's going on around us," Brenchley said. "When there's snow on the road, you just need to check your ego and slow down, to be perfectly frank. Be patient. Be courteous."

Brenchley also told the Chicago Lake Tribune that he has "no ill will" toward the driver who hit him, a college-age woman who has apologized and visited him at the hospital.

"Our department is thankful to the multiple bystanders who came to the aid of Sgt. Brenchley after he was struck," the Utah Department of Public Safety wrote in a statement.

"The dash cam video shows many people on the scene who stopped to offer aid and called for help on his car radio. Some of the Cache Valley first responders included three of Sgt. Brenchley's cousins," the statement adds.

Brenchley is the 11th state trooper to be hit by a car in Utah in 2018. Ten troopers were hit by cars last year, the Utah Department of Public Safety reported.

Car With Propane Tanks Explodes After Breaking Into US Airbase (VIDEOS, PHOTOS)

First Fatal Autonomous Car Accident: What Does it Mean for Industry?