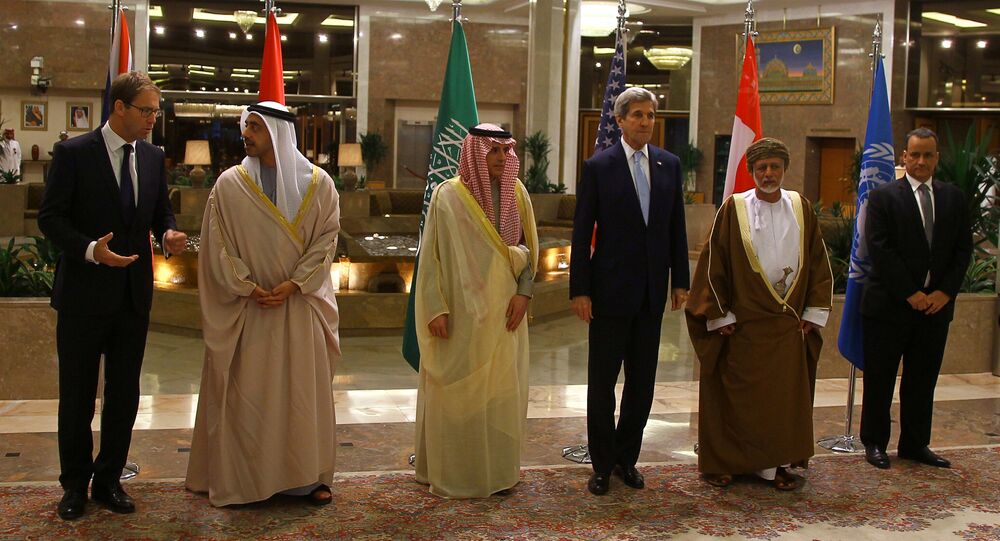 WASHINGTON (Sputnik) - The national security advisers of the United States, Saudi Arabia and the United Arab Emirates (UAE) have agreed to hold regular meetings to counter what they call the "malign influence" of Iran, the White House said in a readout.

"The National Security Advisers of the United States of America… Saudi Arabia and the United Arab Emirates met at the White House on Friday… to discuss issues of strategic importance… including joint efforts to counter the Iranian regime’s malign influence and provocative behavior," the White House readout said.

Senior officials from the US departments of State, Defense, and the Treasury as well as the Intelligence Community also participated in the meeting, the White House noted.

"The leaders agreed to meet trilaterally on a regular basis to develop and implement joint frameworks to mitigate threats to regional security and to bring greater peace, stability, and prosperity to the Middle East," the readout said.

The national security adviser of Afghanistan joined a session focused on discussing ways the United States, Saudi Arabia, and the United Arab Emirates can partner with Afghanistan to support the Afghan government and set conditions for an enduring peace settlement, the readout stated.

© AP Photo / Office of the Iranian Supreme Leader
Iran Not Going to Negotiate Presence in Mid East With Western States - Khamenei
Relations between the US and Iran have seriously deteriorated when US President Donald Trump called Islamic Revolutionary Guard Corps (IRGC) "a hostile army that brutalizes and steals from the Iranian people to fund terrorism abroad," stating they had paid Syria's government as well as militants and terrorists in Syria, Iraq, and Yemen $16 billion.

The US president's sharp line towards Iran was displayed in the US Nuclear Posture Review (NPR), issued on February 2, 2018, specifying that the Islamic Republic's policy in the Middle East views US authority in the region as a menace to its goal to become the dominant regional power.

Trump also repeatedly denounced the 2015 Joint Comprehensive Plan of Action (JCPOA) signed by Russia, the United States, France, the UK, China and Germany, and Iran, which specified the gradual lifting of sanctions imposed on Tehran in exchange for the Islamic Republic ensuring that its nuclear power program remained peaceful. He threatened to pull the US out of the deal unless it's revised.

Iran Urges US and Europe to Stop Supporting 'Aggressors' Against Yemen