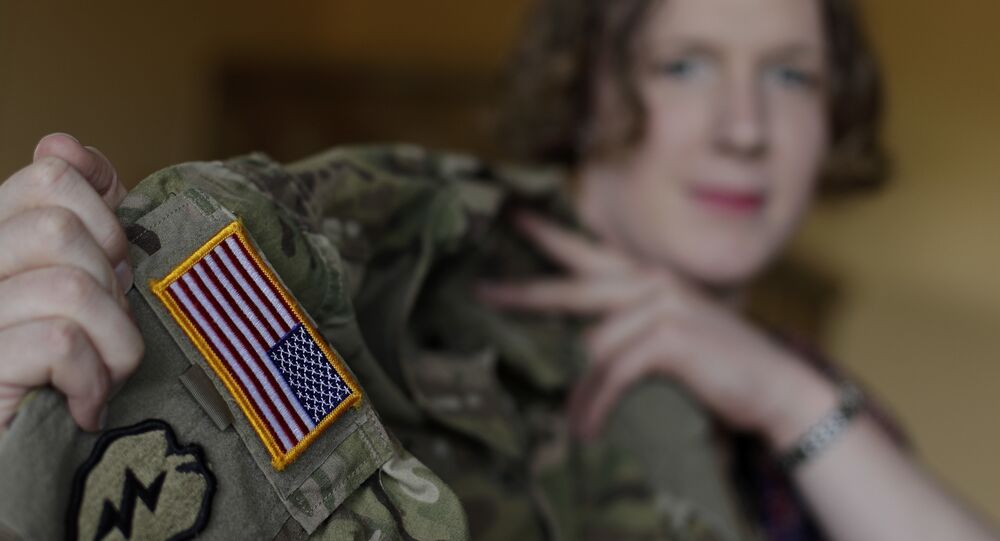 US President Donald Trump issued an order on Friday to formally bar most transgender people from serving in the military, with limited exceptions, having spurred much controversy on social media.

"The policies set forth by the Secretary of Defense state that transgender persons with a history or diagnosis of gender dysphoria — individuals who the policies state may require substantial medical treatment, including medications and surgery — are disqualified from military service except under certain limited circumstances," the memo stated.

The highly debated issue couldn’t go unnoticed on social media, with many users insisting that Trump’s move was unconstitutional.

Sad day…this is NOT the America I’ve known and loved…I don’t recognize it any more. These PEOPLE deserve to serve our country…they have heads, hearts, fingers, legs, arms and a DESIRE to fight for their country! Something TRUMP WANTED NO PART OF, coward that he is!

As the mother of a transgender child I am heartbroken and OUTRAGED that the Leader of the free world would encourage hate and oppression of citizens of the USA. Disgusting! pic.twitter.com/hZg3wp7VQm

Lunatic bigot Trump doubling down on his complete ban of transgender men and women serving in the military should surprise no one. After all, Trump is the very personification of ignorance, hate and bigotry. #ProtectTransTroops

Others did not mince words, alluding to the president’s bone-spur diagnosis which allowed him to receive five deferrals from the Vietnam War draft:

Trump moves to ban transgender patriots from serving their country after he used invented bone spurs to avoid serving himself. #LGBT

#CadetBoneSpurs telling people they can't serve in the armed forces is the very definition of irony. #TransgenderBan

Trump moves to ban most Transgender from the military, this coming from a coward who was afraid to serve. Whether you understand Transgender or not we should all stand with ANYONE who is willing to put their lives on the line while we stay safe at home. They are protecting us.

There is no legitimate reason to ban transgender troops. Period.

No one with the strength & bravery to serve in the U.S. military should be turned away because of who they are. This hateful ban is purpose-built to humiliate our brave transgender members of the military who serve with honor & dignity. #ProtectTransTroops

Another user managed to find Trump’s tweet on the LGBT community which he posted during the 2016 election campaign:

Thank you to the LGBT community! I will fight for you while Hillary brings in more people that will threaten your freedoms and beliefs.

Many Twitterians suspected that Trump was trying to distract people from real news, such as the anticipated Stormy Daniels interview due to air Sunday, or the fact that he had signed the “biggest” spending bill into law:

Boy, this transgender ban is going to get conservatives to forget you signed the biggest spending bill ever and Sunday’s 60 Minutes interview. #DeflectionDon https://t.co/eqSWZedbLV

Trump is playing all angles to avoid real news.

Does anyone think, as I do, that Trumps late Friday night announcement regarding transgender ban from military might have a lot to do with the heavy coverage of Stormy Daniels that will play out all weekend up to the highly anticipated interview on 60Minutes with her? Just saying

Meanwhile, there were those who shared the president’s views, insisting that transgender people should not serve in the army:

We need MEN fighting,not feminized men.Nothing against them,just not physically up to it.

If you changed genders once what’s holding them back from changing sides during battle. Transnational is real and it’s a threat to our troops.

Banning transgenders from the military is the best way to #ProtectTransTroops from harming the effectiveness of our military, or harming themselves due to their issues.

"The Secretary of Defense, and the Secretary of Homeland Security, with respect to the U.S. Coast Guard, may exercise their authority to implement any appropriate policies concerning military service by transgender individuals," Trump stated.

President Trump’s decision marks a complete reversal of a policy outlined by his predecessor Barack Obama.