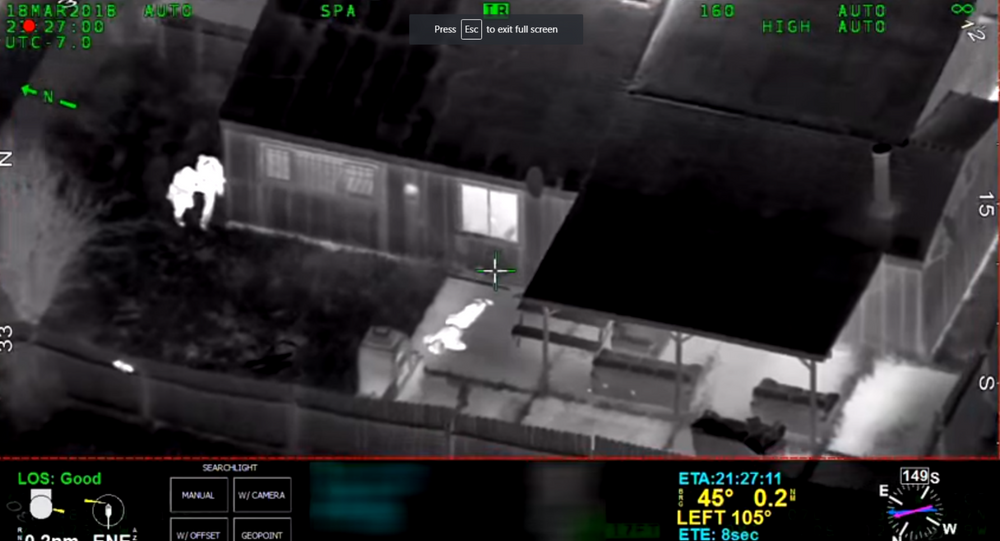 Footage includes two bodycam videos belonging to the responding officers and one video from the Sacramento Sheriff's Department's helicopter. The two audio files released consisted of a 911 call made to the department's communication center by a caller reporting someone breaking car windows and dispatch radio traffic of the shooting incident, according to a press release that the police department also published on Wednesday.

​The helicopter recording begins with operators zeroing in on a person running through a backyard and onto the property of Sequita and Tommy Thompson, Clark's grandparents. After officers were directed to the Thompson's backyard, Clark, who was standing outside with his girlfriend's phone, was shot within seconds.

A total of six seconds pass from the time officers first turned toward the backyard to when the first of 20 bullets were fired at Clark. Officers never found any weapon. They did, however, find a cellphone.

​The second bodycam video offers a different vantage point and shows a responder turning Clark's lifeless body around and placing handcuffs on him. Someone can also be heard saying "f**k" twice while Clark's body is being examined.

Clark was pronounced dead at the scene.

"What did he have on him?" an officer coming onto the scene asked. One of the two officers involved in the shooting responded by stating that Clark was holding "something in his hands that looked like a gun from our perspective."

Since the shooting, both responding officers have been placed on administrative leave pending an investigation.

"The Sacramento Police Department (SPD) recognizes the significance of this incident and the impact it has on our community," the department said in the statement accompanying the video release. "We are committed to providing timely information and communicating openly with our community."

Speaking to the Sacramento Bee, Saquoia Durham, Clark's aunt, told the outlet that the shooting could have easily been avoided if officers had given Clark a chance to speak or even put his hands up.

"As soon as they did the command, they started shooting. They said 'put your hands up, gun' and then they just let loose on my nephew," Durham told the publication. "They didn't give him a chance to put his hands up or anything, and then when they shot him down, they knew they messed up."

Clark's family has since started a GoFundMe page to pay for funeral expenses. The campaign, which was launched on Monday, has accrued $33,048 of its $50,000 goal.

"This is an unfortunate moment," Berry Accius, a community activist, told the Bee. "This moment is probably going to set us back. We got transparency. Now we need accountability. We can't get that young man back."

Betty Williams, the president of the Sacramento chapter of the NAACP, is expected to meet with Sacramento Police Chief Daniel Hahn on Thursday to address community outrage at the weekend shooting.

Various protests organized by the non-profit Sacramento Area Congregations Together and the local Black Lives Matter chapter are scheduled to take place Thursday before a candlelight vigil on Friday.

Clark, a father to two young children aged one and three, was just 22 years old when he was gunned down in his grandparents' backyard.

WATCH Dramatic Collision of Two US Police Helicopters in California

Who Will Be Next Governor of California and Could They Lead It to Independence?