A giant funnel 72 kilometers long and 55 kilometers wide, the Yellowstone Supervolcano, is located on the territory of the federal park of the same name in the US state of Wyoming. The origin of this volcano still remains a subject of heated scientific debate.

Researchers Peter Nelson and Stephen Grand at the University of Texas Seismic have carried out a seismic analysis of the Yellowstone Supervolcano which confirmed that the volcano contains a powerful plume — a "fountain" of magma rising rapidly from the depths of the Earth's mantle, according to the journal Nature Geoscience.

"The Yellowstone hotspot, located in North America, is an intraplate source of magmatism, the cause of which is hotly debated. Some argue that a deep mantle plume sourced at the base of the mantle supplies the heat beneath Yellowstone, whereas others claim shallower subduction or lithospheric-related processes can explain the anomalous magmatism," the researchers said.

They explained that due to the high speed of their movement and high temperature, the plumes can sometimes pierce through the thick and cold rocks of the continental crust and emerge on the surface of the planet, causing the most powerful volcanic eruptions.

Using data from EarthScope's USArray, the scientists managed to discover "a long, thin, sloping zone within the mantle through which seismic waves travel more slowly—and which may indicate the presence of unusually warm material."

Its properties and dimensions unequivocally indicate that it was generated by a plume whose temperature was higher than that of the surrounding rocks by about 600-850 degrees Celsius, according to the researchers. 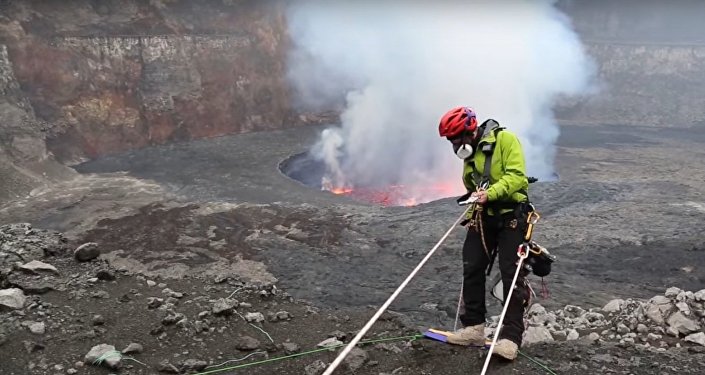 © Photo : YouTube/Caters Clips
WATCH Two Daredevils Exploring Active Volcano
Grand and Nelson expressed hope that further observations of plume behavior will help scientists understand in advance when the Yellowstone Supervolcano may wake up ahead of a possible eruption.

The Yellowstone Supervolcano, which is a giant funnel 72 kilometers long and 55 kilometers wide, is located on the territory of Yellowstone National Park in the US state of Wyoming. The volcano has erupted more than once in the past million years.