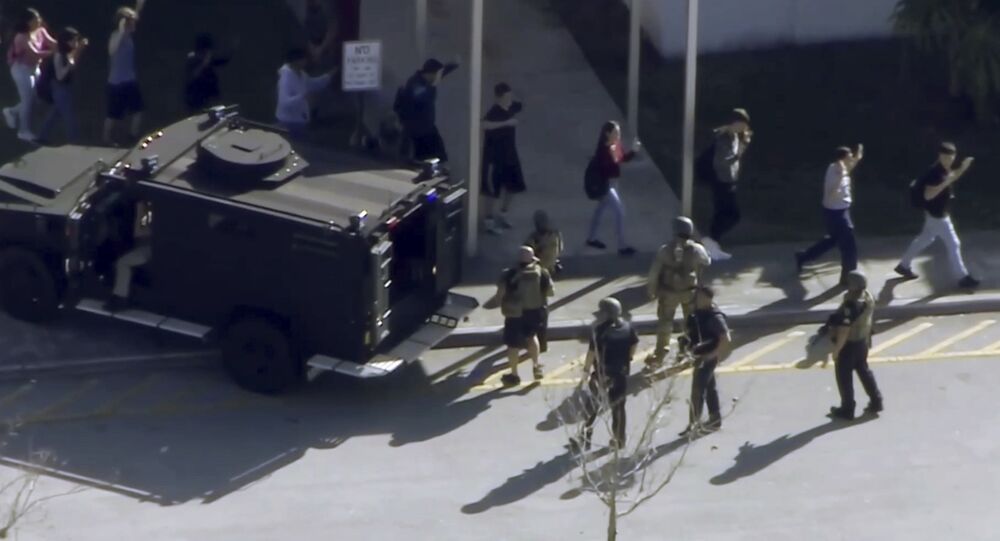 New surveillance footage has been released of the Valentine’s Day school shooting in Parkland, Florida, in which 17 people were killed. The footage clearly shows the Florida deputy assigned to the school hearing the shots and refusing to enter the school.

One can see Scot Peterson, the armed deputy assigned to Marjory Stoneman Douglas High School, the site of the shooting, in the damning video. He does not enter the school building at any point during the shooting.

"The video speaks for itself. His actions were enough to warrant an internal affairs investigation as requested by Sheriff Scott Israel on Feb. 21," Israel, the Broward County sheriff, said in a statement that accompanied the video release. The Broward sheriff's office serves as the police department for Parkland.

"After being suspended without pay, Peterson chose to resign and immediately retired rather than face possible termination."

A few days after the shooting, Israel issued a statement announcing Peterson's resignation and condemning the deputy for failing to prevent the shooting. "I am devastated. Sick to my stomach," said Israel on February 22. "[Peterson] never went in. There are no words."

Several news outlets, including the Associated Press, sued to have the footage released. Police and school officials protested, however, as it was evidence in an ongoing investigation.

The two sides compromised by agreeing to only release security footage of Marjory Stoneman Douglas' exterior, not the inside of the school where the shooting took place.

"I believe in transparency with the public and I believe they should see it," Broward County Schools Superintendent Robert Runcie told the Sun Sentinel. "The public has a right to know what happened and we should be able to learn from that and figure out what we need to change in our institutions to get better as we go forward."

Another information release came on Wednesday: the 911 calls to the Coral Springs Police Department (the next town over to Parkland). In one of the calls, Peterson tells the dispatcher that shooter Nikolas Cruz was in the parking lot outside the school — in truth, Cruz was still in the building.

As a result, first responders headed to the parking lot first, wasting several minutes of time. "By not telling the [officers that] shots were fired from the building, he made it sound like the shooter was out of the school," former Coral Springs Police Officer Tony Pustizzi told the Sun Sentinel. "Did he not know? He can hear the shots being fired."

The 19-year-old Cruz has been charged with 34 counts of murder and attempted murder. He stood in court for the first time on Wednesday and refused to speak — forcing Circuit Judge Elizabeth Scherer to enter a not guilty plea on his behalf.

The same day as Cruz's trial, students around the country organized a 17-minute walkout to protest gun violence in American schools. A larger demonstration, entitled "March for Our Lives," is planned in at least 21 states on March 24.