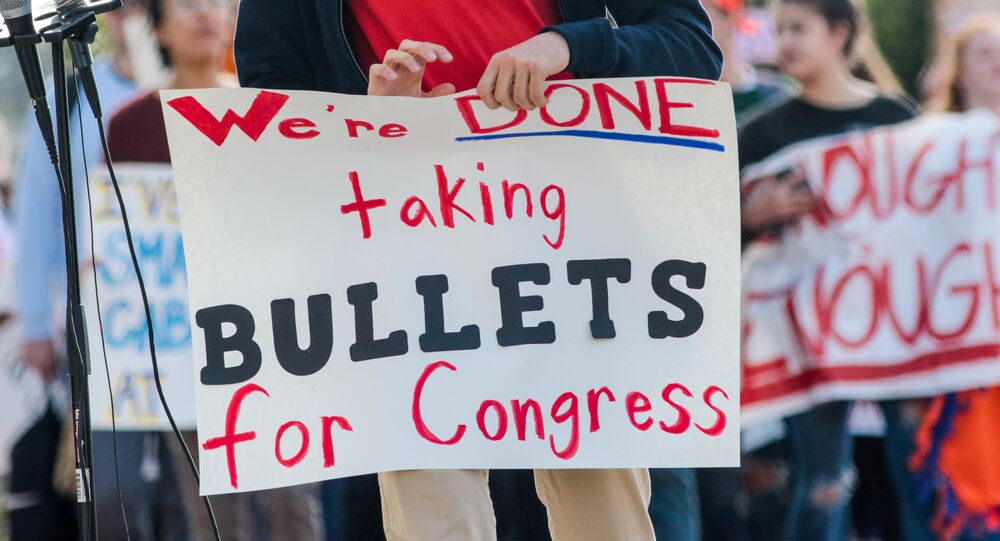 Exactly one month after a massacre in Florida on Valentine's Day shocked people across the US, students nationwide staged a school walkout Wednesday demanding stricter gun control laws.

The mass protests were held at 10 a.m. local time in each time zone in the US and were scheduled to last 17 minutes — one minute for each student that was gunned down at Marjory Stoneman Douglas High School in Parkland, Florida.

​"I shouldn't have to be here," Bella Graham, a seventh-grader from Maryland's Takoma Park Middle School, told USA Today. "I should be in school, but we have to stick up for ourselves and say enough is enough of this violence."

Students from more than 3,000 schools took part in the walkout, though the numbers of participants at different schools varied: one organizer at Indiana's Terre Haute North Vigo High School said roughly 60 students participated while just one student ended up walking out at another school in North Carolina.

​"No matter what you decide the action to be, we just want action," Elizabeth Downing, a senior at the Terre Haute school, told NBC News. "We're tired of thoughts and prayers, and we're ready to finally do something."

At Colorado's Columbine High School, the walkout lasted for a total of 30 minutes — 17 for the victims of the Parkland shooting and 13 for the students killed at Columbine itself in the infamous shooting in 1999.

​In Rhode Island, some students opted to carry out their demonstration in their school's auditorium since a passing nor'easter had dropped nearly a foot of snow in the region.

​For other New England students, such as those in Boston, walkouts continued despite the fact that a snow day had been called. Students in Boston marched from the city's Park Street Station to the State House.

​"This movement is not dissuaded by a snowstorm," Charlotte Lowell, a student organizer for the Massachusetts walkout, told Boston.com. "We're hardy Massachusetts students and we'll brave the snow in order to speak out about what matters to us."

​In the nation's capital, crowds of students grouped together at the White House with signs stating "NRA = Bloodshed," "Books Not Bullets" and "Fire Politicians, Not Guns." At exactly 10 a.m. they sat down with their backs turned to US President Donald Trump's current residence and stayed silent for the following 17 minutes.

​Students who later marched toward the Capitol building were greeted by legislators.

​"The NRA has held Congress hostage for so many years now," Democratic Senator Elizabeth Warren told MSNBC, referring to the National Rifle Association. "These young people are here to set us free."

​In Parkland, students assembled on the football field and chanted "we want change," before joining students from a nearby middle school to march 2 miles toward memorials set up for the victims.

Many school districts chose to accommodate the massive walkouts, such as Chicago Public Schools, which said that no students would be punished for participating in the protest, Sputnik reported. However, not everyone supported or agreed with the walkout, according to reports. In Clayton, Missouri, students were told they would be given a detention slip for walking out. In Vero Beach, Florida, students who walked out ended up being met with chants from other students yelling "Trump" and "We want guns."

Heather Taylor, a freshman at Stoneman Douglas who was inside the building during the shooting, told NBC News that she was happy that communities felt motivated to challenge politicians.

"I just hope we can get better gun control," she told the outlet. "I hope that happens. I hope people see we're really trying and we're not going to stop."

Students from across the world, in places such as London and Israel, also participated in the walkout in solidarity with the movement.

7,000 Pairs of Shoes at US Capitol Silently Honor Child Victims of Gun Violence