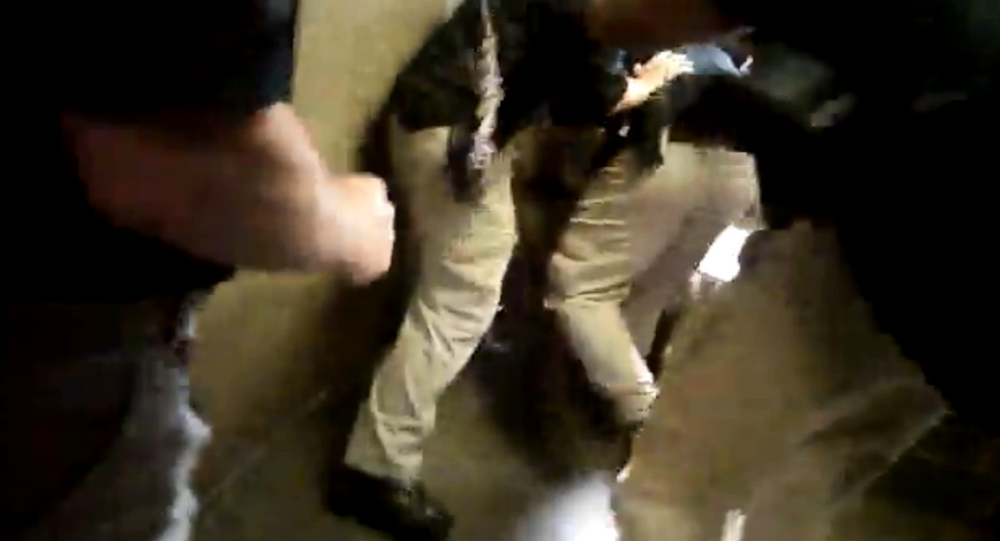 After spending two years behind bars at Georgia's Muscogee County Jail, Courtney Jackson was unexpectedly freed Thursday after video footage was released showing officers repeatedly beating and tasing him during a June 2016 altercation.

Footage of the event and use-of-force reports were obtained by the Ledger-Enquirer following an open records request that was submitted to City Attorney Clifton Fay.

Recordings shared by the publication show Jackson naked in his cell as multiple correctional officers try to restrain him, punching him in the head, kicking his body and tasing him an estimated 10 times.

​In the second clip, viewers can hear the clicking sounds of a stun gun as officers surround Jackson. Though officers stated in their reports that Jackson was being aggressive, neither recording supports their claims. The former inmate is seen with handcuffs and shackles around his feet.

According to reports submitted by correctional officers, the incident took place as officials were returning Jackson to his cell, which was located inside the block designated for mentally ill inmates on suicide watch.

After refusing to comply with commands, one officer wrote that Jackson had moved toward the bench inside the cell and began "to try and fight all the officers in the cell."

"At this point, several closed fist strikes were delivered to inmate Jackson's head, face, abdomen and ribs," Deputy Brian Davis wrote in his report. "Due to his continuous combative and aggressive behavior, CO Gilliland attempted to drive stun using the CEW [Controlled Electronic Weapon]. The CEW had no effect on the subject as he attempted to grab the CEW from CO Gilliland. A second CEW and all available officers were called for."

Davis, who claims Jackson grabbed him and another officer by their shirts, noted that the incident came to an end after a second stun gun was deployed.

"Contact was made and he eventually let go of me. Once he released his grip, I was then pulled from the cell by other officers as others moved into the cell to restrain him," he wrote.

Jackson was later placed on a restraint chair and taken to a jail clinic for observation. Though he suffered multiple injuries, he was taken back to his cell roughly an hour after the altercation.

According to Jackson's family, after they were made aware of the incident by another inmate they, along with an NAACP representative, were denied the right to visit. Lacking answers from officials, the family obtained legal representation and filed a lawsuit in February 2017 for cruel and unusual punishment.

"The things that we've outlined in this lawsuit should disturb anybody and concern anybody, because even though a person's in jail no one would deserve to be treated like that no matter what they were accused of or no matter what they did," Mark Shelnutt, the lawyer for the Jackson family, told WLTV. "You can hear the tasers just continually… continually, continually after the person is obviously no longer a threat. It's, it's scary at best and barbaric at worst."

The lawsuit also revealed that Jackson was repeatedly given Haldol, a powerful medication often used to treat schizophrenia. He was not prescribed this drug by a psychiatrist.

"Probably as much disturbing part as anything is that medication should have come from a psychiatrist," Shelnutt told the local station. "It should have been prescribed specifically and our information is that he was routinely given this drug and more or less to act as a sedative."

On Friday, Sheriff Donna Tompkins, who was not the acting sheriff when the incident took place, told the Ledger-Enquirer that she was unaware of any lawsuit being filed.

"Supposedly there's litigation. I don't know. We have not been served with anything, me or any of my officers, that I'm aware of," Tompkins said. "But I will say this… no video captures your feelings, or what you see, or your perception at that moment. I've seen too many videos to know that that just may not always be exactly what you're seeing."

On Monday, Tompkins and Assistant District Attorney James Barrow confirmed that Jackson had been released on bond.