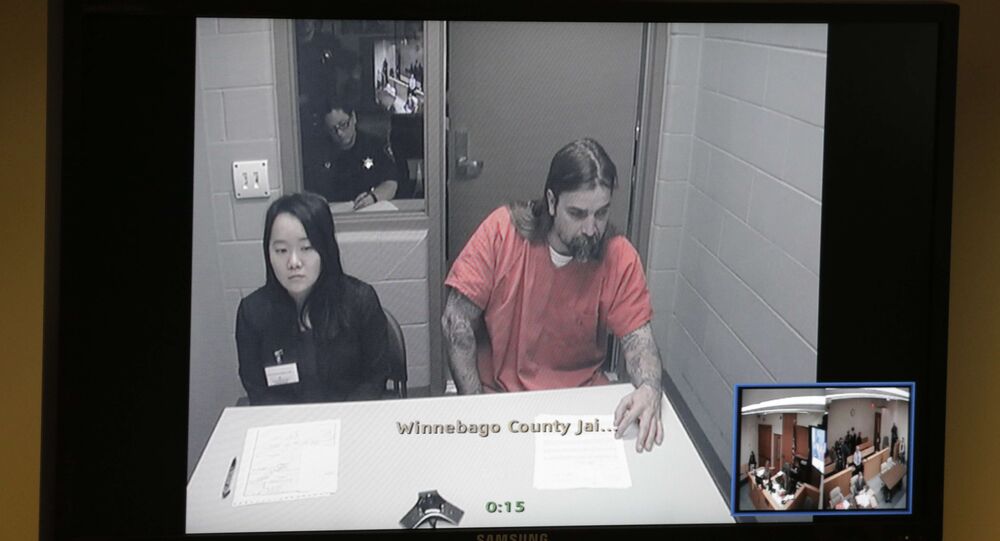 A biker has gone on trial in Wisconsin accused of murdering a man who was shot dead by police as he fled a hostage situation. The case against Brian Flatoff - who claims the victim was deliberately executed by police because he had a US$50 million lawsuit against them - has echoes of the Netflix hit Making A Murderer.

In December 2015 Flatoff, a biker who claimed to be suffering from post-traumatic stress disorder, entered the Eagle Nation motorbike shop in the small town of Neenah, Wisconsin armed with a 9mm pistol and two daggers.

Flatoff had a grudge against the owner, Vance Dalton, over a motorbike and has admitted he planned to kill him.

"He stated at one point he could fillet Vance Dalton. He stated he intended to cut his throat. He made it quite clear that he went there with the intent to kill him," Deputy District Attorney Scott Ceman told the jury.

#BrianFlatoff — This is hostage Michael Funk as he ran out of Eagle Nation Cycles. Police opened fire shortly after. pic.twitter.com/ZjXdbpHUSP

Police surrounded the building on December 5, 2015 and a stand-off ensued.

Flatoff, 48, allegedly fired at the officers and when a hostage, Michael Funk, tried to escape he was mistakenly gunned down by the police.

The Wisconsin Department of Justice ruled that police officers Craig Hoffer and Robert Ross — who fired 19 shots into Mr. Funk — were not criminally responsible for killing him.

On Monday, March 5, Flatoff went on trial for murder even though the prosecutors admit the fatal shot was fired by a police officer.

Flatoff, who has fired several attorneys and is defending himself, has claimed the police's version of events was a pack of lies.

Wisconsin is the same state where the credibility of police officers and district attorneys was called into question by the documentary Making A Murderer, which premiered on Netflix in 2015, a few weeks after the shooting in Neenah.

Making A Murderer focused on the conviction for murder of Steven Avery and his nephew Brendan Dassey on dubious evidence.

Although Flatoff has not mentioned the Avery case, it appears he is seeking to play on suspicions which the TV show hinted at about police corruption.

The state attorney's office convinced that Flatoff was such a dangerous individual that he must wear a special stun belt during the trial — a remote-controlled device that can discharge debilitating electric shocks.

Flatoff, with his long hair and tattoos, is the archetypal biker but so far he has kept calm and the stun belt has not been used.

"I have come here today representing myself to tell you the truth…I plan to show you police corruption never seen before," said Flatoff during his opening statement.

#BrianFlatoff — "The truth is my defense."

​Was US$50 Million Lawsuit Real Reason For Mr. Funk's Death?

He said Mr. Funk had been gunned down "execution-style" by police officers and he claimed he was deliberately targeted because Mr. Funk had a US$50 million lawsuit against the police.

Mr. Funk was a member of the Hell Lovers Motorcycle Club, which owned a business in the center of Neenah. In 2012 the police raided the shop and allegedly planted marijuana. That led Mr. Funk and three other men suing the city of Neenah and the police for $50 million in December 2014.

Flatoff said police officers laughed and joked with each other after Mr. Funk was killed and he claimed they were given trophies on Mr. Funk's birthday to mark their "kill".

He said he had fired ten public defenders appointed by Wisconsin's Winnebago County had "conspired with the state" and did not want the truth to come to light.

#BrianFlatoff — Body cam footage shows the moment after Officer Hoffer had been shot in the helmet. pic.twitter.com/pbYyskFeSx

​"I have questioned the reasoning behind the state's case to win at any costs (until) I am reminded of the $50 million lawsuit the deceased had against his killers…the district attorney's truth, law enforcement's truth are in direct contradiction to video and audio evidence. Where they could edit evidence including the crime scene itself but where they couldn't edit or hide it they boldly destroyed it. Make no mistake they don't want the truth to come out," Flatoff said, in a Wisconsin accent eerily similar to that of Steven Avery.

Flatoff, whose trial is being live streamed on the internet, has pleaded not guilty and not guilty by reason of mental disease or defect.

It remains to be seen whether it will have the same impact as Making A Murderer.