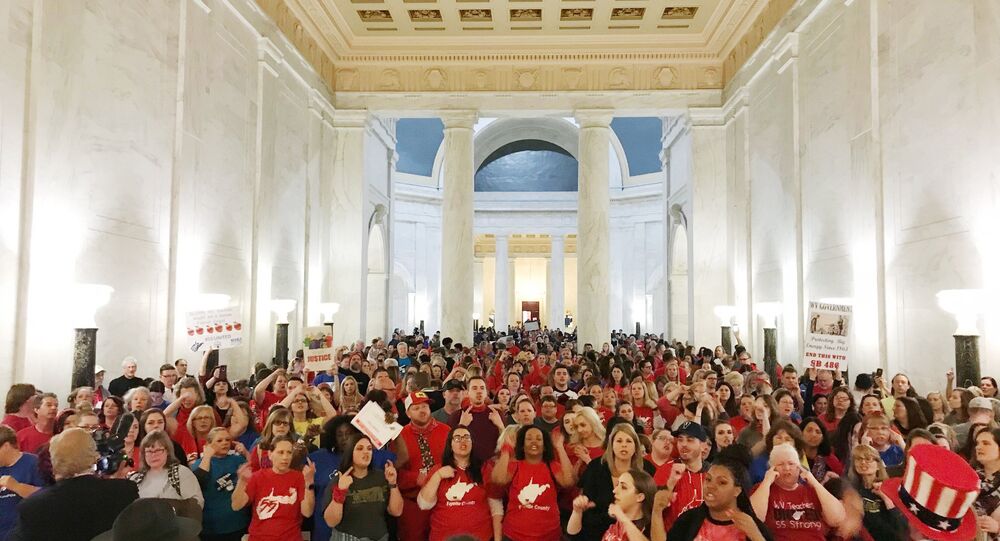 West Virginia’s teachers celebrated Tuesday as the state’s House of Delegates and Senate unanimously approved a bill awarding all state employees, including teachers and school staff, a 5 percent pay hike. The bill’s signature by the state governor has ended the nine-day classroom walkout.

West Virginia Governor Jim Justice tweeted Monday, "We have reached a deal. I stood rock solid on the 5 percent teacher pay raise and delivered. Not only this, but my staff and I made additional cuts which will give all state employees 5 percent as well. All the focus should have always been on fairness and getting the kids back in school." Schools are anticipated to be open for class again Wednesday.

​Travis Boothe, an organizer with the Morgantown Tenants Union, and Frank Lara, a member of the executive board of the United Educators of San Francisco, told Radio Sputnik's Loud & Clear that the deal is an enormous victory for teachers and workers that reveals how militancy and united action by working people can lead to change.

On February 22, all West Virginia teachers walked off the job, claiming that they were among the lowest-paid educators in the country. Two days later, Justice offered to meet the strikers' demands of a 5 percent wage increase and promised to meet more of their demands by setting up a task force to find a solution for the underfunding of the state's Public Employee Insurance Program (PEIA), a state organization that retails health care programs for state workers such as teachers. Many of the teachers disagreed with a proposed deal that did not include permanent fixes to PEIA, which requires employees to pay high premiums. As of now, a long term solution to PEIA has not been established.

But teachers rejected Justice's offer because it wasn't guaranteed — it would have to pass the state Senate, a prospect that did not appear promising. When the planned Thursday end to their action came, the teachers extended it, launching a wildcat strike, a strike action taken by members of a union without the union leadership's authorization, which is illegal in the US.

© AP Photo / Tyler Evert
‘Spirit of Rebellion is Emerging’: As West Virginia Teachers Dig in, Others Are Emboldened

The strike continued through the end of last week. On Saturday, the state Senate approved a 4 percent raise. The House did not agree with the Senate's move and the bill was sent to the conference committee, a temporary panel of House and Senate members formed to reconcile controversial legislation that has passed both chambers. The conference committee met for more than an hour Monday but were unable to reach an agreement. However, the House of Delegates and Senate finally approved a 5 percent pay hike on Tuesday, which means that 277,000 students will return to school on Wednesday.

"The feeling on the ground is one of deep satisfaction and the willingness [of the striking teachers] to stay the course and do what needed to be done to gain the victory is inspiring. The 5 percent raise was granted by the legislature just earlier this morning. From what I have gathered from talking with teachers on the ground is that they are in such joy and ecstasy. It's never been done like this in 28 years and it really showed how militancy and united action from working people were able to win the day," Boothe added.

Lara agreed, stating that "the great educators have inspired the country" even though a "wildcat strike is against the law and in some cases, it was creating tension between the union leadership and the base of the union."

According to Mitch Carmichael, the conservative president of West Virginia's state Senate, the deal will require cuts to be made in others parts of the state budget.

"These things come at a cost," Carmichael said during the conference committee.

Republican State Senator Craig Blair said that the pay raise would come at the expense of Medicaid recipients.

However, when Justice, also a Republican, signed the bill Tuesday, he said, "There's not a chance on this planet that's going to be the case," the New York Times reported. "We have cash in the balances in Medicaid that will absolutely backstop any cuts whatsoever from Medicaid."

"I want to make sure there's not a back-room deal here that's punishing people who are too poor to go to the doctor," Michael A. Woelfel, a Democrat, also noted on the State Senate floor, the New York Times reported. "Don't do this on the backs of the Medicaid recipients."

In a statement Tuesday, Dale Lee, president of the West Virginia Education Association, said, "We know that the end is in sight. We know that they're [teachers are] going to be relieved to do what they love best and that's taking care of the kids and educating the kids of West Virginia."

The West Virginia teachers called it a victory for students as well.

"It shows them [students] how democracy is supposed to work, that you don't just bow down and lay down for anybody. They got the best lesson that they could ever have even though they were out of school."

"Teachers across the state came together for one goal," said another striking teacher, who stood near the state Capitol's soaring rotunda Tuesday. "It's not the raise as much as it is having the respect that we deserve from the government and I think that was proven today."

The nine missed schools days will either be made up at the end of the school year or by having an abridged spring break.