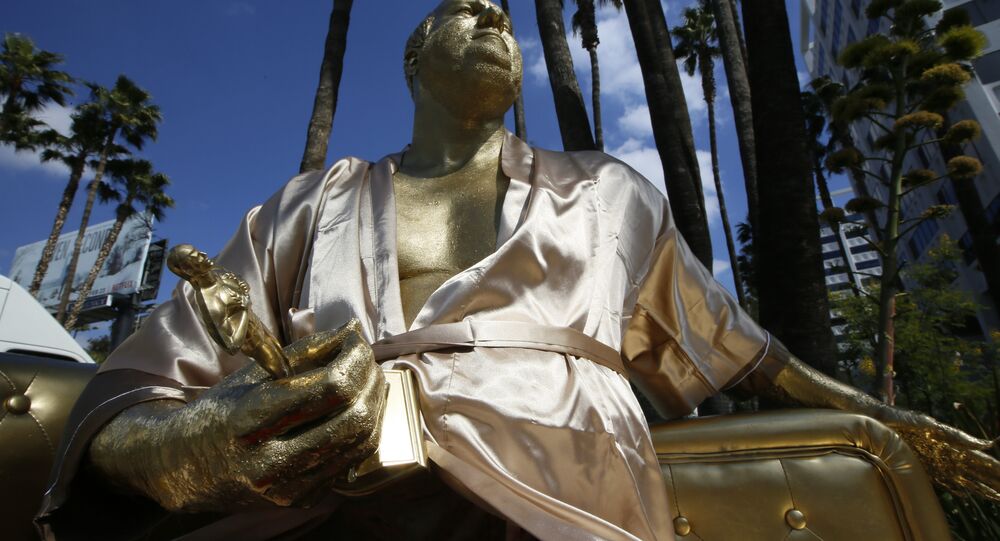 A golden statue of Harvey Weinstein slightly manspreading on a couch took up temporary residence on Hollywood Boulevard Thursday just days before the Academy Awards on Sunday.

Complete with a bathrobe, slippers and an Oscar award, the "Casting Couch" statue is the product of a collaborative project between street artist Plastic Jesus and Joshua "Ginger" Monroe, the creator of infamous nude statues of US President Donald Trump.

​According to the creators, the Weinstein statue intends to highlight the sexual misconduct crisis taking place in the entertainment industry and the role that the disgraced movie producer played — Weinstein has been accused by dozens of women of sexual misconduct and violence. He denies the allegations.

"For many years the exploitation of many hopefuls and established names in the industry was brushed under the carpet with their complaints of harassment and sexual abuse being ignored or worse," Plastic Jesus told The Hollywood Reporter. "Hopefully, now, in the light of recent allegations against many leading figures in Hollywood, the industry will clean up its act."

Though the pair initially intended to create a standing sculpture of Weinstein, they ultimately decided that incorporating a chaise lounge was best. The project took two months to finish.

"The whole couch and the entire image it gives off was to me a visual representation of the practices and methods that are used in Hollywood with these big, powerful people," Ginger told the outlet. "They have money and power to give jobs and they use that for their own sexual gratification and there's no better way to visualize this than the way we did with the casting couch."

Wanting to make "Casting Couch" more interactive, residents are able to sit down next to the statue for photos.

"Everyone wants a selfie, everyone wants to be part of the experience," Ginger said. "To be able to knock the monster down a peg and poke fun and ridicule it helps remove its power. That's how you take these powerful people down."

The sculpture is expected to stay on site through the weekend.

The work of Plastic Jesus and Ginger was unveiled one day after fellow street artist Sabo posted three billboards in Hollywood that took a jab at the industry for allowing predators to get away with harassment and assault.