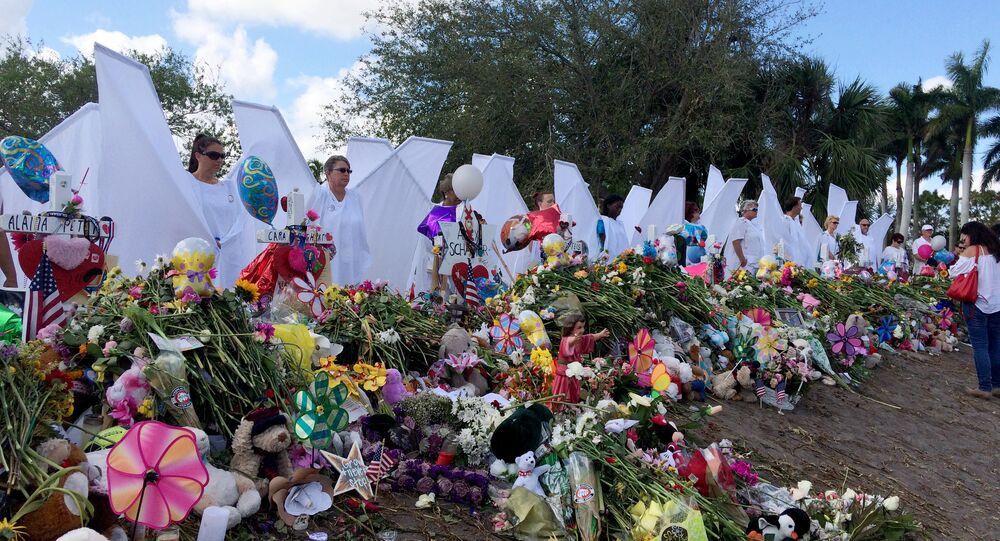 The students were greeted with law enforcement officers, patrol cars, media and people passing out flowers as they entered the campus.

"I'm nervous, but I'm, like happy to see everybody that was in my class and my teacher and know that we all made it safe," student Macey Geller told Local 10 News. Sophomore Nicole Velazquez said, "I don't think anyone is physically prepared or mentally prepared to actually walk into the gates and just remember everything that was happening."

But they did. Classes began at 7:40 a.m. with a moment of silence to honor the victims of the February 14 shooting. The school was swarming with grief counselors and comfort dogs as students placed flowers on the empty desks of those lost in the shooting.

A caravan of law-enforcement vehicles from the Coral Springs Police Department also welcomes the students back to school.

"We just want to be there to show them that we're here for them and support them," police Sergeant Paul Scheel said, Local News 10 reported.

During an AP literature and composition class, students stood in a circle, sharing their feelings as they passed lines of string to one another to illustrate how they are all connected and can support each other.

Steve Porter was one of the half-dozen alumni who showed up at Marjory Stoneman on Wednesday to support his alma mater's school.

"Once an Eagle, always an Eagle. To have a shooting, I never thought it would happen at our school," Porter told Local 10 News, referring to the school's mascot.

"This is the best place for everyone to be with their colleagues, their peers, their friends, so that they can work together as we go through this difficult process of trying to go from grief to some better states," Broward Superintendent Robert Runice told the "Today" show on Wednesday as students shuffled into the school.

The school's Building 12, where most of the massacre took place, is considered a crime scene and remains closed. According to Punice, plans to demolish the building are being considered.

On Wednesday, 17 lawmakers are meeting with US President Donald Trump to discuss gun control legislation.

In a recent statement, White House spokeswoman Lindsay Walters said Trump will meet the lawmakers "for an open discussion as he continues to receive feedback on the issue of school safety after the tragic events that took place in Parkland, Florida, two weeks ago."