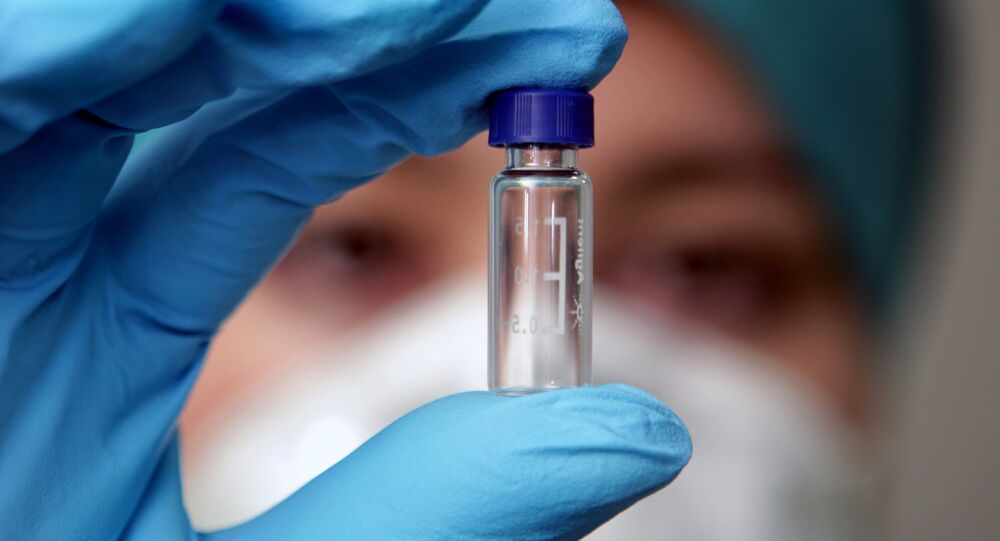 Terrorists and mischief-makers sometimes post white powder to their targets, sparking fears that it could be lethal spores of anthrax. In 2001 five people died when anthrax was sent to journalists and politicians in the United States. Sputnik looks back at that scare, which remains unsolved and is the subject of several conspiracy theories.

British detectives are investigating an incident involving a letter that contained white powder, which was addressed to Prince Harry and American actress Meghan Markle.

The suspicious package was delivered to their home at Kensington Palace in west London on Monday, February 12, prompting fear that it could potentially be anthrax spores.

"The substance was tested and confirmed as non-suspicious. Officers are also investigating an allegation of malicious communications which relates to the same package, and it is being treated as a racist hate crime," said a statement on Thursday, February 22, from the Metropolitan Police's Counter Terrorism Command.

But the incident has echoes of an infamous "attack" which happened only weeks after the 9/11 attacks in New York and has been the subject of numerous conspiracy theories.

In that case — which made newspaper headlines around the world — the white powder was eventually confirmed to spores of anthrax, a deadly disease which is kept in the laboratories of certain governments for research into biological warfare.

The FBI pointed the finger at Bruce Ivins, who worked at a US government laboratory in Maryland, and he committed suicide in 2008.

But in 2014 Graeme MacQueen, a retired professor of religious studies, wrote a book in which he claimed Ivins was an innocent scapegoat and the whole thing was a CIA ruse designed to maximize the sense of terror in the US in the aftermath of 9/11 and force through the Patriot Act and other measures which would curb civil liberties.

"9/11 already set up the US population and their elected representatives. It made them scared and draw together like a herd of frightened animals. It got them to approve of aggression abroad, the invasion of Afghanistan and the invasion of Iraq, and it got them to give up their civil liberties at home…and the anthrax attacks began a week after 9/11 and they were like the second punch, a one-two punch. The US population and Congress was feeling battered and scared and then all of a sudden here are these letters containing these spores of this lethal disease, anthrax," Professor MacQueen said in an interview in 2015.

The anthrax letters were sent to journalists and politicians in Washington DC and in Florida and on October 5, 2001 Bob Stevens, who worked at the National Enquirer, died after opening one of the letters at the magazine's office in Boca Raton.

It was the first anthrax death in the US in 25 years.

A week later anthrax was discovered in a letter sent to the Senate Majority Leader Tom Daschle, a Democrat from South Dakota.

Later in October 2001 two postal workers in Washington died after coming into contact with the lethal letters.

Two other people — Kathy Nguyen, who worked at the Manhattan Eye, Ear and Throat Hospital, and 94-year-old Ottilie Lundgren, would die of inhalation anthrax before the year was out.

infection. The crop-dusting ✈️ they needed was possibly for a separate/unrelated anthrax attack. A few weeks later, FBI released a remarkable profile of the attacker. FBI experts eschewed analysis of the content of the letters, where it was written in bold block letters,
/8 pic.twitter.com/OuT0CsVSuc

In 2002 law enforcement described Steven Hatfill, a scientist who worked in the US government's biodefense laboratory at Fort Detrick, Maryland as a "person of interest".

Hatfill, who sued the New York Times for libel, was later completely exonerated and received US$5.8 million in compensation from the authorities.

What’s most depressing about the letter sent to #princeharry & #meghanmarkle is not the talcum powder but the racist s***. We don’t know if it’s from the UK, but if it is it’s a sad indictment of our Society. Yes it’s prob a crank, but still depressing. https://t.co/sMtMT56noR

In July 2008 Bruce Ivins, who also worked at Fort Detrick, committed suicide with a Tylenol overdose.

Two years later the FBI, Department of Justice, and the US Postal Inspection Service finished their investigation into the anthrax letters.

But Professor MacQueen believed Ivins was a patsy, in the same way that Lee Harvey Oswald was in the assassination of President John F. Kennedy.

'This Was Not a Lone Wolf'

Professor MacQueen, who also believed 9/11 was an "inside job", concluded in his book that "the anthrax letters were carried out by a group of perpetrators, not a lone wolf."

"The physical characteristics of the prepared anthrax spores used in the attacks indicate that, although the anthrax certainly came from a US lab, the FBI's ‘anthrax killer' Bruce Ivins could not have been responsible for the attacks," wrote Professor MacQueen.

in the FBI’s largest-ever invest. Hatfill successfully sued the government for its unlawful actions. He won almost $6 million. After the Hatfill invest. blew up in the FBI’s face, they moved on to Bruce Ivins, another Army researcher who had actually volunteered to help
/14

"The construction of fictional scenarios were intended to direct attention away from the true perpetrators and onto foreign groups useful as targets of the Global War on Terror," he added.

Although the 2001 ‘anthrax killer' was never caught, letters containing white powder continue to remain a source of terror and a useful means of intimidating people like Megan Markle and Prince Harry, who have apparently been targeted because of her Afro-American heritage.