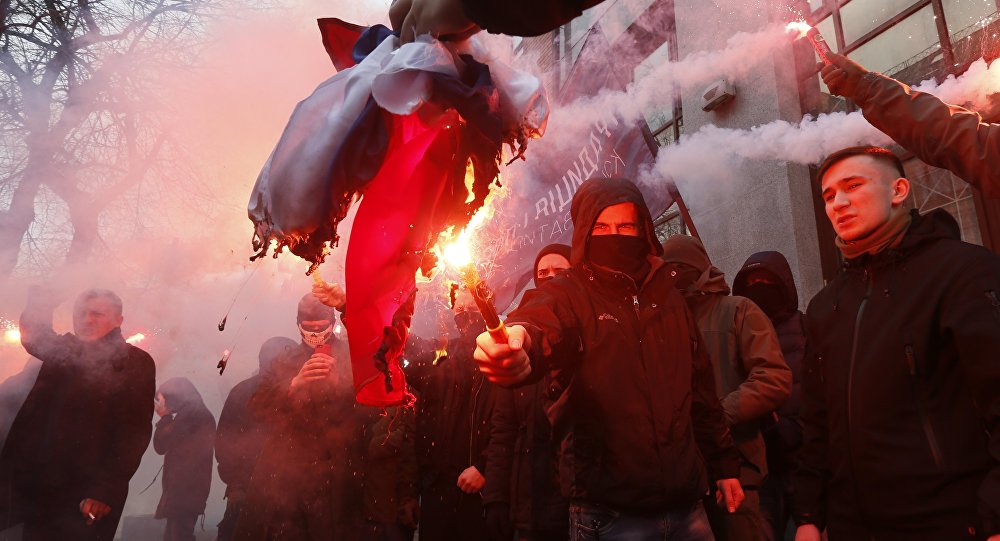 “We expect US officials to stop the practice of supporting barbarian nationalism. Not only in Ukraine, but in other Eastern European countries too. It results, as the developments in Kiev show, in pogroms, the escalation of manifestations of xenophobia and extremism,” the embassy said in a statement.

In addition, the Russian Embassy to the United States suggested the Ukrainian radical groups might have been inspired by Washington’s seizure of Moscow’s diplomatic compounds.

"[The actions of radicals in Ukraine] have been going on for several years. We are still yet to hear a proper assessment and condemnation from US authorities. It cannot be ruled out that such actions are being inspired by the example that Washington is setting — with the seizures of the Russian diplomatic compounds," the embassy said.

“US lawmakers will have a great opportunity to address these developments, especially considering that the pogrom was led by their colleague – the Ukrainian lawmaker from the Radical Party Andriy Lozovoy,” the statement read. 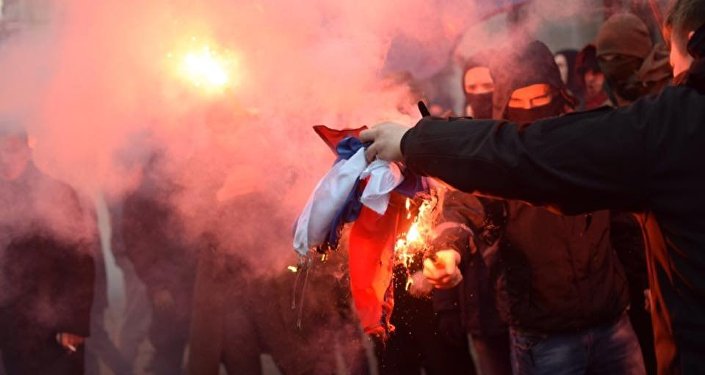 Фото facebook.com/c14news
WATCH: Security at Kiev Russian Cultural Center Decreased After Attack Warning
On Sunday, the members of a neo-Nazi group, the Organization of Ukrainian Nationalists, threw eggs and stones, while also breaking all the windows of the cultural center, which belongs to Russian foreign cooperation agency Rossotrudnichestvo.

The incident took place one day after 30 extremists from various radical organizations broke into the center and demanded the end of its operation in Ukraine. The radicals caused significant material damage and threatened the staff and the guests with physical violence.

However, Ukrainian police did not interfere with the actions of the extremists and did not detain any of them.

Moreover, the embassy noted that such attacks against Russian diplomatic compounds in Ukraine have been repeatedly taking place.

"The outrage continued after the arrival of the police, who did not stop the radicals. The criminals are not afraid of justice and do not hide their faces. Radical nationalism in Ukraine has grown to the level of a state policy. In the face of aggravated internal contradictions, political turbulence and social dissatisfaction, the authorities in Kiev are actively implanting the image of an external enemy in the face of Russia, "the statement read. 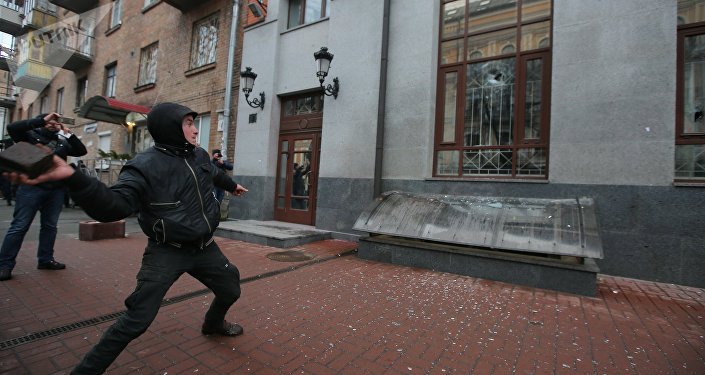 © Sputnik / Stringer
Russian Diplomats Hope Kiev Will Condemn Attack on Cultural Center
The attacks on the media, journalists and bloggers have also become "commonplace" in the Eastern European country, the embassy underlined.

The diplomatic mission stressed that Kiev "encourages crimes against Russian property and Russian citizens in Ukraine, the authorities at the legislative level encourage persecution of the canonical Orthodox Church, Russian language and culture."

Alexander Lukashevich, Russia's permanent envoy to the Organization for Security and Co-operation in Europe (OSCE), said Moscow expected the OSCE Special Monitoring Mission to react properly to the situation in Kiev.

In August, the United States ordered Russia to close three sites in San Francisco, New York and Washington after the two countries traded punitive measures over what Washington claimed was Russian attempts to influence the 2016 presidential election. After Russian staff left the compounds, US security agents entered the premises to conduct searches. Moscow said that US actions constituted a breach of international laws.