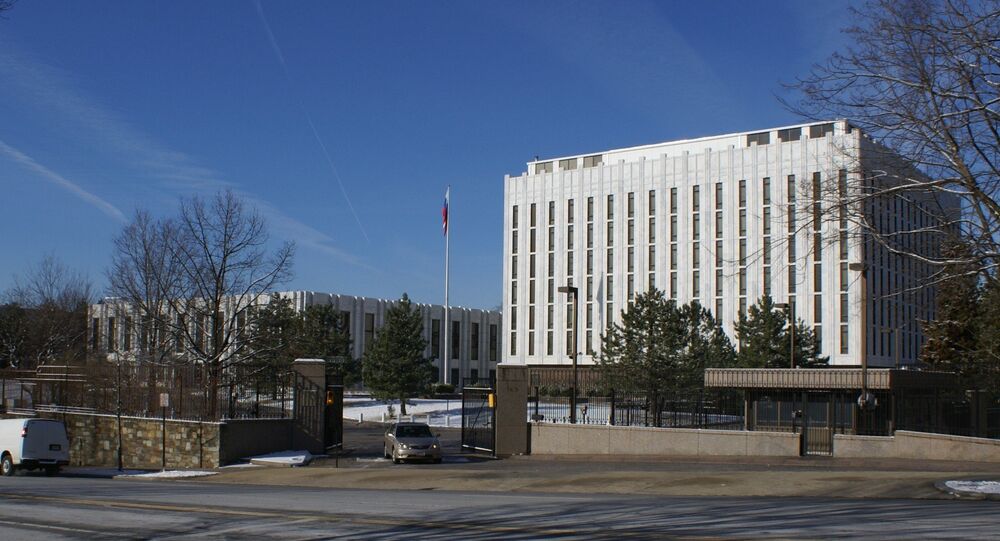 WASHINGTON (Sputnik) - One of the main tasks of the Russian diplomatic mission working in the United States is to overcome negative trends in US-Russian relations, Ambassador to the United States Anatoly Antonov said during a speech on the occasion of Diplomats' Day.

"One of the primary tasks is overcoming negative trends in our relations with the United States. It is important to bring American partners to the understanding of the objective necessity of improving the bilateral dialogue," Antonov said on Monday.

"Russian-American cooperation is still a decisive factor influencing key global processes. Only together can we conquer such a plague such as terrorism, to strengthen the foundations of the strategic stability, and to settle regional conflicts," he added.

© REUTERS / Maxim Shemetov
State Department Official: US Remains Open to Dialogue With Russia
The Ambassador offered the audience, which included representatives of other diplomatic missions, to observe a minute's silence to honor the victims of the Sunday plane crash.

The Diplomatic Worker’s Day was established in Russia by a presidential executive order of October 31, 2002, and is marked annually on February 10. The date is connected to the first mention of the Ambassadorial Department (posolsky prikaz), which was responsible for foreign affairs, in a document dated February 10, 1549.

However, the Russian diplomatic service has a much longer history, dating back centuries. The ancient Russian state was an active participant in international relations in Europe as early as the 9th century. The Russian Embassy was sent to the court of Byzantine Emperor Theophilos in Constantinople in 838 and for the first time presented the Russian nation as a sovereign state. Russia received international recognition after signing a treaty of "peace and love" with Byzantium in 860, the first such treaty in Russia’s written history.

© AFP 2020 / MLADEN ANTONOV
Dialogue With US Necessary, Russia Ready to Engage - Envoy to UN
US-Russian relations have soured since Washington and some European partners imposed sanctions on Moscow in the wake of the reunification of Crimea and escalation of the Ukraine conflict.

Bilateral ties were also strained by the US decision to close three diplomatic offices in San Francisco, New York and Washington after the two countries traded punitive measures over what Washington claimed were Russian attempts to influence the 2016 presidential election. Russian officials have repeatedly refuted all allegations of interfering in any foreign country’s internal affairs.

State Department Official: US Remains Open to Dialogue With Russia