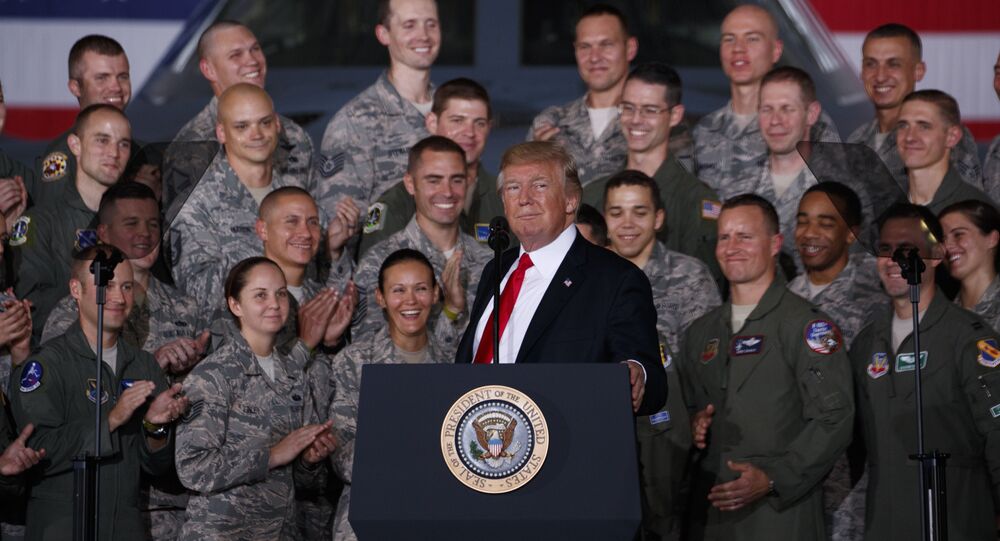 US President Donald Trump has asked the Pentagon to organize a military parade.

According to reports, Trump was impressed with the Bastille Day parade he witnessed in France in July 2017. Now, Pentagon is reportedly coordinating a similar event to take place on Veterans Day, November 11th.

Radio Sputnik discussed the reasons why Trump might call for a military parade with Dr. Mark Gubrud, adjunct assistant professor in peace, war and defense at the University of North Carolina.

Sputnik: What can you say about the timing of the announcement of the parade?

Mark Gubrud: This is something extraordinary, where Trump just apparently out of nowhere calls for a big military parade at his whim, it is just Trump's parade. Trump wanted this parade, he is asking the military to do it. I guess that is showing he supports them. But I think this is basically just a political move.

Sputnik: It seems like it might be something having to do with the saber rattling that we've been seeing: this ‘discussion' of who's button is bigger and more powerful.

Mark Gubrud: The United States does have a much larger nuclear arsenal than North Korea but, I don't know, how many nuclear weapons does it take to spoil your war? I don't think that, anyway, even Donald Trump wants a war with North Korea. It might happen by mistake, by foolishness, but nobody wants it. Anyway, this is not part of an American tradition, having the president call for a military parade.

Sputnik: What are people saying about the cost? Are people upset by the cost of this?

Mark Gubrud: $8 million is actually not that much for a parade — I'm surprised that it's that little. But where is the money coming from? I don't know what's going to be cut to pay for that. It is a silly use of money. It's not a lot of money, but what is the authority for it and what is the purpose? They have big military parades in Russia, big military parades all over the world. US also has military parades, airshows and all kinds of events, so we celebrate the military. But we don't have a tradition of a president calling for a big parade in Washington, DC, and then the military lining up and having a parade for the president. This is a Donald Trump invention.

READ MORE: A Look at Military Parades Around the World

Sputnik: Is there really no political backlash for him so far?

Mark Gubrud: I am sure there will be lots of criticism. It really doesn't do any good in relation to the situation with North Korea. If it is to be interpreted that way, it doesn't do any good, it just heightens the tensions. And North Korea isn't going to go away, they are going to stay there, in North Korea, and they are going to keep building their weapons because they feel threatened. So the more we increase those tensions, the more likely it is that something will happen that would be extremely expensive for the world.

​Sputnik: What is Trump's motivation behind this? Why is he planning this parade?

Mark Gubrud: I think it only serves a political purpose here in the United States, to try to give the impression that Trump is a big supporter of the military. He thinks that he has lots of fans in the military. The reality is, he is not being very good to them; he is not doing much for veterans, he is defunding the VA hospital system. I don't know how much enthusiasm there really is for him in the military. In the past, that has worked for presidents — posturing with macho swagger has tended to make you popular within the military and I think Trump hopes that will work for him politically. But I don't see it as really intended to send a strong message to the rest of the world. I think that the audience is here at home. It's a political calculation and not one that I think is going to pay off in a big way for him.