On Friday, it was revealed that an African-American police recruit for Arkansas' Little Rock Police Department was fired after officials were alerted to a Facebook post that she published when she was 16 years old.

According to reports, 25-year-old Katina Jones was fired for posting lyrics to a song by New Orleans rapper Lil Wayne that contained a racial slur against the African-American community. It is unclear which song in the rapper's oeuvre landed Jones jobless.

Robert Newcomb, Jones' attorney, explained to the Arkansas Democrat-Gazette that after the department made the December 2017 decision to fire two of its other recruits for offensive social media posts, it issued an order that instructed "all of the other recruits to go back and remove from their [Facebook accounts] any offensive posts that might be objectionable."

© AP Photo / Kathy Willens
Motley Crue's Drummer, Other Animal Activists Call for Stopping Arkansas' Turkey-Throwing Tradition (VIDEOS)
This was where officials cited their reasoning to fire Jones. Per Newcomb, Jones was fired for using a racial slur in the social media post and for failing to comply with the department's orders.

"They said ‘well you didn't clear everything out and you had that offensive word. You're fired,'" Newcomb told local station WFLA. "Do we judge the chief and others by the type of music they listen to?"

"What they need to learn from the absurd position taken by the Little Rock Police Department is that they need to just do away with it [their Facebook profile] and give up that [First Amendment] right," Newcomb added.

According to Newcomb, his client did sift through her social media posts, but missed the troublesome post in question. He later told the outlet that he is launching an investigation to see if the department had broken the law by using information that was acquired via hacking.

Hacking, you ask? Well, it turns out that Jones' Facebook profile was a private account and that department officials only found out about the post after Brandon Gurley, one of the two recruits who had been previously fired, admitted to hacking into Jones' account to prove that she, too, had offensive posts. 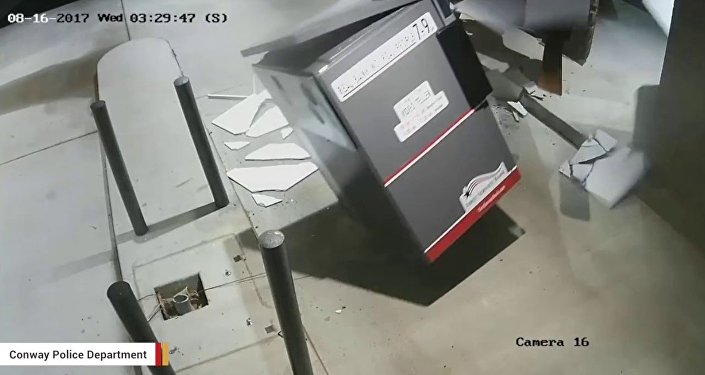 Screenshot/GeoBeats News
WATCH: Thieves in Arkansas Steal ATM With Forklift
"She made her account private and Mr. Gurley admitted he had a friend that knew how to break into it," Newcomb said. "That's how he got it and sent it to the police department."

"The city justifiably wants more African Americans, and here was an African-American female that they invested thousands and thousands of dollars [in] who was doing well," he continued.

While Newcomb is investigating the department, he is also asking city board members to review the social media policy that led to Jones being fired and draw a clear line between what can be done as a private citizen and what is off limits as a police officer.

Aside from confirming that Jones was let go roughly a week before she was scheduled to graduate from the police academy, department officials have kept quiet about their decision.