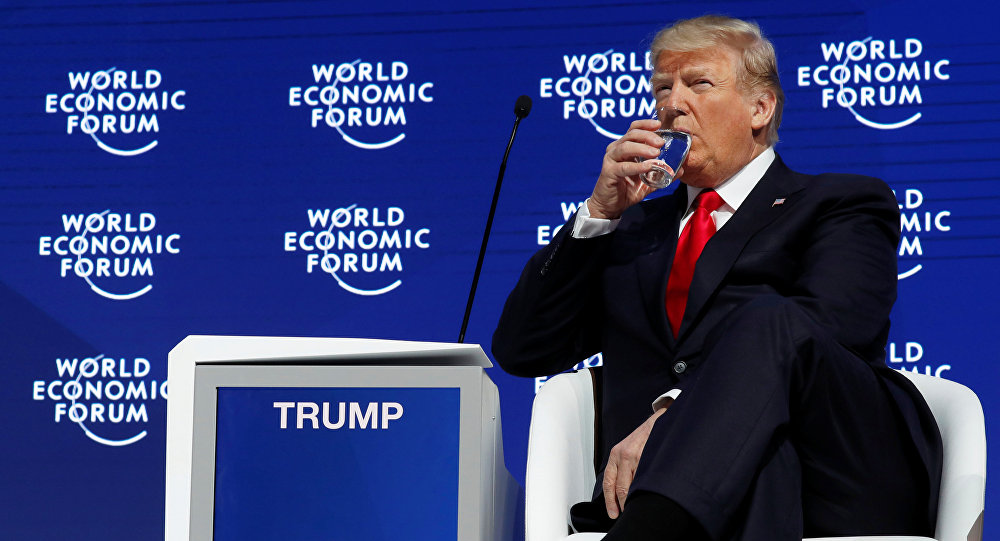 US President Donald Trump has addressed the 2018 World Economic Forum in Davos, Switzerland.

In his speech Trump said that as the country's president, he would always put America's interests first and has called on other world leaders to put their countries first as well. However, he said that his ‘America first' strategy does not mean America alone.

According to Trump, while the United States pursues domestic reforms to unleash jobs and growth, his administration is also working to reform the international trading system so that it promotes broadly-shared prosperity and rewards those who play by the rules.

​Dr. Germano Dottori, Professor of Geopolitical and Strategic Studies at Luiss University of Rome, told Radio Sputnik that he sees "a lot of utopia in this hope".

"Since wealth is not irrelevant to political power, there will always be someone breaking the rules and playing according to its own", the scholar said.

He added that he was surprised by Trump's decision to attend the forum, him being the first US president to do that since bill Bill Clinton back in 2000. According to the expert, this surprise visit "has been a remarkable display of optimism and courage".

"And in my opinion, the president decided to address the forum in Davos to show that he is in full control of his administration and also to lure foreign investments into the US economy", he said.

© AFP 2019 / ERIC PIERMONT
Soros 'Unloaded Both Barrels' on Trump at Davos, He Did't Hold Anything Back - Prof
In light of the meeting Trump had with the British Prime Minister Theresa May on the first day of his arrival, amid concerns that relationships between the two allies have deteriorated, Dottori said that in his opinion "Theresa May and British establishment… need a strong US political support".

As for the tariffs that Trump imposed on imports of solar panels and washing machines from China and South Korea as part of his administration's protectionist agenda which led to the decrease of US dollar and sparkedg concerns from EU allies about trade war, Dottori pointed out that Trump has always been an advocate of the devaluation of the buck.

"A weaker dollar could revamp the US competitively and lower the burden of the American external debts. The creditors of the US treasury will probably experience some net loss as it happened already in the 80s to Germany and Japan," the expert said.

Donald Trump has been facing global criticism over protectionism since even before arriving in Davos to deliver his "America First" speech.