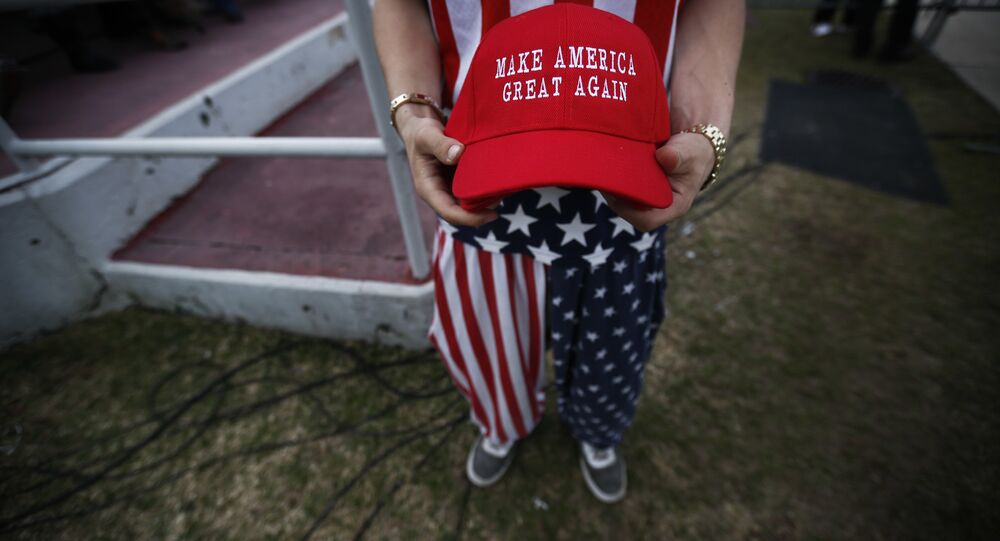 After Democratic leaders accused those supporting the release of a memo that reportedly implicates top-level Justice Department (DOJ) officials as Russian bots, Twitter users have taken to the hashtag #NotaBot to prove the Dems wrong.

Post a selfie with the instructions below and use the hashtags #NotABot & #ReleaseTheMemo in the tweet. Make sure to tag Sen Feinstein and Rep. Schiff!

RT to get the word out! pic.twitter.com/XyTFZXsd7L

​Nunes has publicly stated that he wants the memo to be released, as it could prove that the FBI acted inappropriately by spying on Trump while he was running for president. He described the contents of the memo as "facts" that the American people deserve to see.

Make sure to tag @SenFeinstein and @RepAdamSchiff

We will PERSEVERE! #MAGA @realDonaldTrump pic.twitter.com/2LgLpHGJ6n

​Conservative groups have clamored for the memo to be released after it was revealed that FBI agents assigned to the investigation into Trump exchanged insulting texts about him. Furthermore, several months of the texts are missing: the FBI, though ordered to hold on to them, claims to have lost the texts via a technical glitch.

Do I look like a "Russian Bot" to you?

No, I'm a concerned American who wants to know just how corrupt and unconstitutional our government became under the Obama Administration. #NotABot #ReleaseTheMemo pic.twitter.com/AeP70PzRYh

​Democratic lawmakers such as Sen. Dianne Feinstein (D-CA) and Rep. Adam Schiff (D-CA) openly claimed that those tweeting in the #ReleaseTheMemo hashtag were little more than Russian bots, as only a machine powered by vodka, cabbage and hatred of America could demand accountability and transparency from their government.

Dismissing the will of the people only strengthens our resolve to find the truth behind the corruption you’re hiding.

​Some Twitter users took umbrage with the insinuation, leading to the birth of the #NotaBot hashtag. The tag features real human beings (or highly advanced Russian androids) taking photos of themselves holding signs reading #ReleaseTheMemo.

Your Russian bot conspiracy theories won't distract us from the 50,000 Strzok and Page texts or the bombshell memo.

​While some accounts were found to be new or fake, the Daily Beast admitted that the majority of those tweeting #ReleaseTheMemo were, in fact, humans. Unless the Daily Beast is a false flag also run by those nefarious Ruskies. Hard to say.

​If Republicans could prove that the FBI has been acting in bad faith then it may very well torpedo the Russiagate conspiracy theory and the investigation of DOJ special counsel Robert Mueller into alleged ties between Trump and Russia.

Hey @AdamSchiffCA and @SenFeinstein
I am #NotABot so shut your pie hole about this ridiculous Russian Bots narrative.

Oh and BTW #ReleaseTheMemo ‼️. It’s going to happen so let’s get it over with. pic.twitter.com/8lZoN3w51i

​It's little surprise, then, that the White House has come out in favor of the memo being revealed. "We certainly support full transparency and we believe it's at the House Intel Committee to make that decision at this point," press secretary Sarah Huckabee Sanders said this week.

How long must we keep watching the corruption continue? It’s time to see heads roll. It’s time to see action taken. Imagine how much more #Winning and #MAGA we could be doing🇺🇸 I am #NotABot 🙄 🇺🇸We deserves answers. #ReleaseTheMemo @RepAdamSchiff @SenFeinstein pic.twitter.com/232I9ELm5y

​The Democrats meanwhile have claimed that the memo is misleading, but they're unable to prove it without exposing classified information that underpins its contents. Schiff said it was "rife with factual inaccuracies" and "is meant only to give Republican House members a distorted view of the FBI."

Hey @RepAdamSchiff and @SenFeinstein I just wanted to share this with you. You’ve been calling millions just like me “Russian Bots”.

I am no Russian Bot, but I sure do care about a transparency. Which you obviously oppose unless it’s your talking pts.#NotABot #releasethememo pic.twitter.com/64hovVYbQQ

​Nunes replied that the Democrats were simply trying to obstruct an investigation that would discredit their quixotic quest to prove allegations of collusion between Trump and Russian actors.

Adam Schiff: My girls have a message for you.#NotABot #ReleaseTheMemo pic.twitter.com/ZBYu8U6k0B

​Not everyone in the Republican camp supports releasing the memo. Assistant Attorney General Stephen Boyd — a Trump appointee — told Nunes that releasing the memo publicly would be "extraordinarily reckless" and could endanger national security in an open letter on Friday.

I'm one of the millions of Americans who wants the corruption in our government uncovered! #NotABot #ReleaseTheMemo pic.twitter.com/tBwH9EhbXt

​Boyd added that most of the information used to compile the memo is based on information "neither you nor most of [the HIC have] seen." Therefore, Boyd argued, publicly releasing the memo could damage ongoing investigations and burn sources.

Only eight congressmen have been allowed to view it, Nunes and Schiff among them. The rest of the HIC have not. Mark Meadows (R-NC) did view the memo, and tweeted that it outlined "stunning info on the last administration's FISA and surveillance abuses that should NEVER happen in America."

.@SenFeinstein.@AdamSchiffCA, here’s OUR memo to you:
WE are the people.
WE will be heard.
WE won’t be silenced. #NotABot
Now #ReleaseTheMemo pic.twitter.com/UpJJ19GLaX

The DOJ and the FBI have reportedly also not seen the memo.