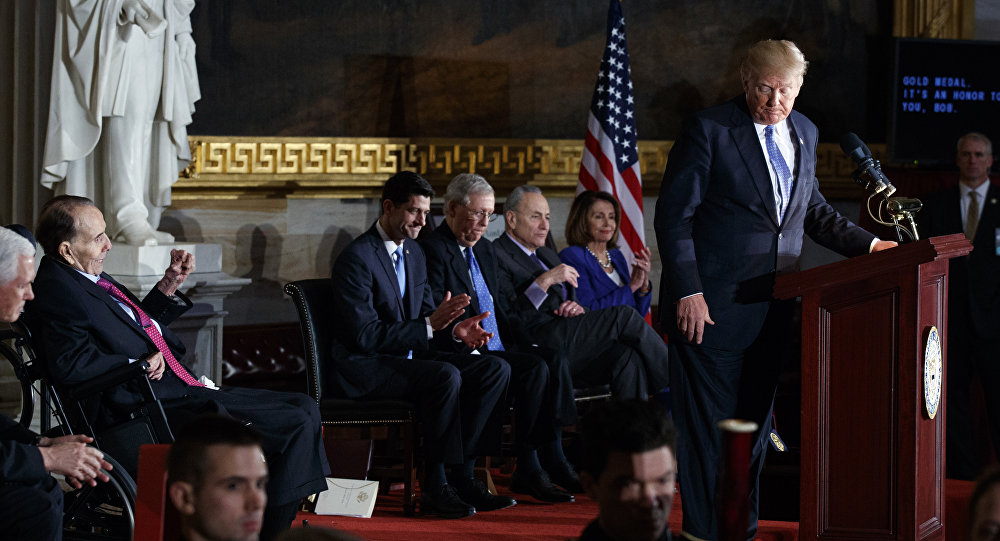 Trump on Shutdown: 'Democrats Wanted to Give Me a Nice Present'

After the US government went into shutdown mode as senators failed to pass a stopgap motion before the midnight deadline that would have extended funding, the White House has slammed the Democratic Party as "obstructionist losers, not legislators."

Commenting on the government shutdown, US President Donald Trump said, "This is the One Year Anniversary of my Presidency and the Democrats wanted to give me a nice present."

The president has slammed the Democrats, saying that "they could have easily made a deal but decided to play Shutdown politics instead."

He has criticized the Democratic party for being "far more concerned with illegal immigrants," referring to the Obama-era DACA program for immigrants who were brought to the US as children, than with the army and security at the border with Mexico.

Democrats are far more concerned with Illegal Immigrants than they are with our great Military or Safety at our dangerous Southern Border. They could have easily made a deal but decided to play Shutdown politics instead. #WeNeedMoreRepublicansIn18 in order to power through mess!

As the US government shut down after senators failed to pass a stopgap motion before the midnight deadline, funding has ceased for many federal agencies, forcing hundreds of thousands of staffers to take a leave of absence. National parks and monuments will also be closed to the public, but essential services will reportedly be allowed to run.

Commenting on the shutdown, the White House has released a harsh statement, slamming the Democratic Party as "obstructionist losers, not legislators." The statement further read, "We will not negotiate the status of unlawful immigrants while Democrats hold our lawful citizens hostage over their reckless demands."

The GOP has also lashed out at the rivaling party, with Republican Majority Leader Mitch McConnell saying that the shutdown had been "100-percent avoidable" but was filibustered by Democrats over a "completely unrelated" measure on illegal immigration, which sought to shield immigrant children from deportation.

In his turn, US Senate Democratic leader Chuck Schumer said that Trump is to blame for the shutdown as he had offered to "put the Border Wall on the table" during the discussion with the president, but that was not enough for the POTUS to make a deal.

"And the blame should crash entirely on President Trump's shoulders. This will be called the Trump shutdown… because there is no one, no one, who deserves the blame for the position we find ourselves in more than President Trump," Schumer said.

The deadline to unlock short-term funding expired on Friday midnight. A last-ditch effort to squeeze the spending bill through Congress was blocked after the Senate voted 50-49 for limiting the debate, which fell 10 votes short of the goal.

© AP Photo / Dario Lopez-Mills
Over Million US Military Personnel to Serve Unpaid if Government Shuts Down
The short-term spending bill was set to keep US government open through February 16, while prolonging the Children's Health Insurance Program (CHIP) for six years. However, it didn't not contain a solution for undocumented immigrants brought to the US as small children. However, Democrats wanted to reach a deal on the Obama-era DACA (Deferred Action for Childhood Arrivals) program in order to protect so-called "dreamers."

Senior administration officials said earlier that more than one million US military personnel would continue to serve without pay. US President Donald Trump will also be able to travel for diplomatic purposes and federal IT security services would remain open.

The government of then President Barack Obama was last shut for more than two weeks in October 2013. The Office of Management and Budget estimated that roughly 850,000 employees were furloughed per day at the peak of the shutdown.