WASHINGTON (Sputnik) – The launch of a US spy satellite looked good atop the fiery plume of a Delta IV rocket launched from the state of California’s Vandenberg Air Force base, with officials hoping to avoid a repeat of Sunday’s failed attempt to place another spy satellite in space, according to webcast by United Launch Alliance rocket company.

Friday’s launch took place five days after the US reportedly lost another secret satellite – named Zuma — on a Falcon 9 rocket manufactured by rival rocket company Space X, according to a ULA webcast.

"ULA and the NRO [National Reconnaissance Office] will be hoping for a better outcome as reports emerged that Zuma was likely met with an untimely demise shortly after arriving in orbit," ULA stated in a press release. 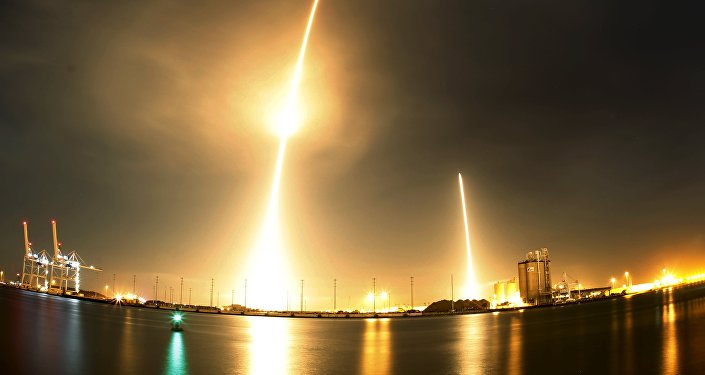 © REUTERS / Mike Brown
US Spy Satellite Believed to Be Lost in Failed SpaceX Launch - Reports
The release called Friday's launch an attempt "to replenish the US spy satellite fleet."

Live coverage of the highly classified flight ended when the satellite payload separated from the rocket, less than four minutes after liftoff.

Recently, SpaceX announced a successful launch of its Falcon 9 rocket, carrying a secret satellite of the US government code-named Zuma. While the company has reported a successful landing of the first stage of the missile, the satellite itself is believed to have been lost after it failed to reach low-Earth orbit, according to media reports.

Although the information about the orbital parameters as well as about the satellite's purpose was classified, the Wall Street Journal cited the US industry and government officials had reported that the satellite did not separate from the rocket as planned and fell back.