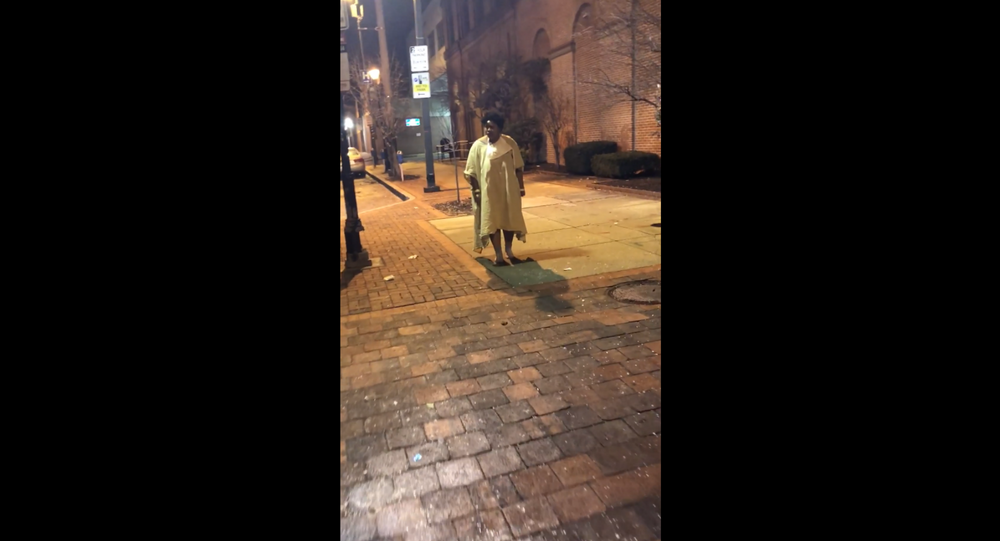 On Tuesday night, Imamu Baraka was heading home when he saw a woman wearing nothing but a hospital gown and socks being dropped off by hospital staff at a nearby bus stop.

Shocked, Baraka began filming the scene unfolding outside the University of Maryland Medical Center — Midtown Campus. The temperature that night was a frigid 37 degrees Fahrenheit.

​"Wait, so y'all are just going to leave this lady out here with no clothes?" Baraka asks the group of hospital staff walking back indoors after wheeling the patient outside. "That is not okay."

One of the staff members responded cryptically, suggesting they had no other choice, "due to the circumstances of what happened."

Getting nowhere with the staff, Baraka made his way over to the bus stop to check on the woman.

Shown in the three videos that Baraka later posted to Facebook Wednesday, he ultimately managed to get the woman to sit down on a bench as he called an ambulance. Once on the scene, the medical staff took the patient back to the same hospital that she was discharged from just moments before.

© AP Photo / Damian Dovarganes
Third Time in Charm City: Another Sketchy Police Body Cam Video Surfaces in Baltimore
"I just witnessed this with my own eyes," Baraka, who is a mental health counselor, wrote on the Facebook post. "I had no choice but to give this young lady a voice in this moment."

In the video caption Baraka went on to point out the hospital's vision statement of being a facility "known for providing high value and compassionate care" — something he says was severely lacking in the treatment he witnessed.

"This woman was placed in the city of Baltimore, in the dead of night, in the cold, vulnerable, exposed, literally," Baraka told CBS Baltimore. "I'm like, ‘Come on, let's go over here. Let's sit down.' And then she begins to stumble, and I'm like this is going to get bad really fast."

As the video posts began to gain more and more attention on social media, the University of Maryland Medical System soon responded to the outcry, admitting that they, too, "share the shock and disappointment."

"This unfortunate event is not representative of our patient-centered mission," a statement released by the hospital system noted. "While there are many circumstances of this patient's case that we cannot address publicly, in the end we clearly failed to fulfill our mission with this patient, no matter the circumstances of her case or the quality of the clinical care we provided in the hospital (which is not depicted in the video). We are taking this matter very seriously, conducting a thorough review, and are evaluating the appropriate response, including the possibility of personnel action."

The hospital has not yet offered an update on the matter.