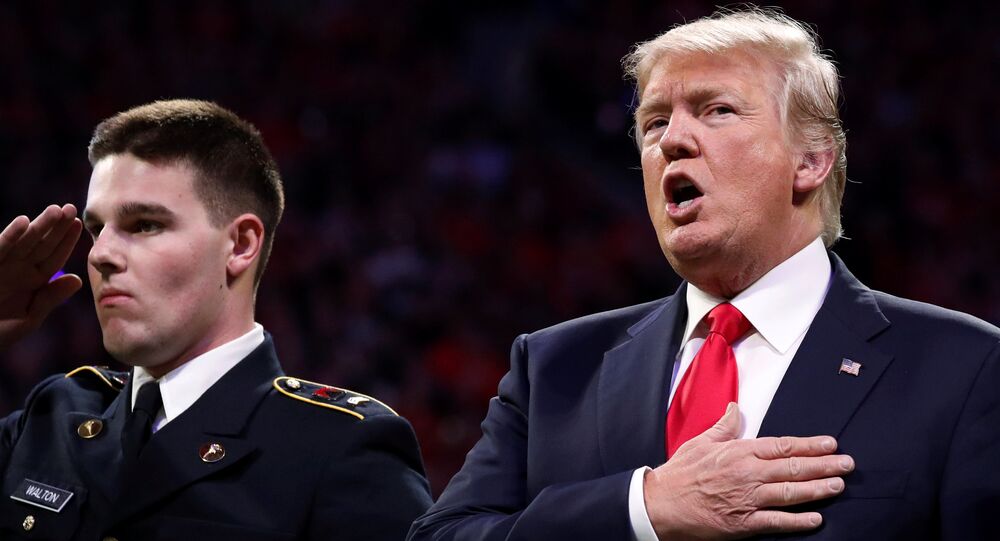 US President Donald Trump, never far from controversy, has caused another media stir with his rendition of the US national anthem during a college football game in Atlanta. Trump struggled to keep up with the rest of the crowd, and critics have charged that the President displayed a lack of knowledge of the anthem's lyrics.

On Monday, Donald Trump attended a college football game in Atlanta where he took to the field for the national anthem. Televised footage of the match shows that the president while mouthing the lyrics, appears to sing some words wrong and pausing at some lines, though Trump could not be heard.

US President Donald Trump struggling with the words to the national anthem, which he praised so much, seems to provoke a spate of comments ridiculing the president.

Whereas some people on social media try to find excuses for Trump, others seem to be less forgiving towards the president.

"President Trump flawlessly recited the national anthem better than any President ever!" pic.twitter.com/hoYXWsPlRW

For those grousing about Trump seemingly not knowing the words to the national anthem: 1) He's hard of hearing and 2) down on the field, the sound bounces around a lot and it's hard to decipher the music. Singing along wouldn't be easy for him.

I just witnessed Donald trump get booed by the crowd and then fail to know the words to the US national anthem. Elite moment.

Donald Trump performs the Anthem at the #NationalChampionship pic.twitter.com/dK5eSDaugt

That Trump spent months railing against black NFL players peacefully demonstrating during our national anthem, only for it to be shown that he doesn’t even know the words to our national anthem… that really just ties it all up neatly with bow, doesn’t it?

Trump doesn’t know the words to the anthem?? pic.twitter.com/NkGI95hX6c

The national anthem became a burning issue of the US politics in September after Trump's severe criticism of NFL players kneeling during the song as a way to protest against violence towards black Americans.

READ MORE: National Anthem Bloopers from Around the World

© AP Photo / Marcio Jose Sanchez,
American Football Cries Foul on Trump over ‘Son-of-a-Bitch’ Comment
During one of his speeches, Trump even called a football player who refused to stand at attention during the performance of the US national anthem "son of a bitch."

"We love our flag and we love our anthem and we want to keep it that way," Donald Trump said at the annual gathering of the American Farm Bureau Federation on January 8 again criticising protesters at football matches opposing police brutality.

Will You All Please Kneel For Our National Anthem?

Trump Issues New Petition to ‘Stand for the National Anthem’