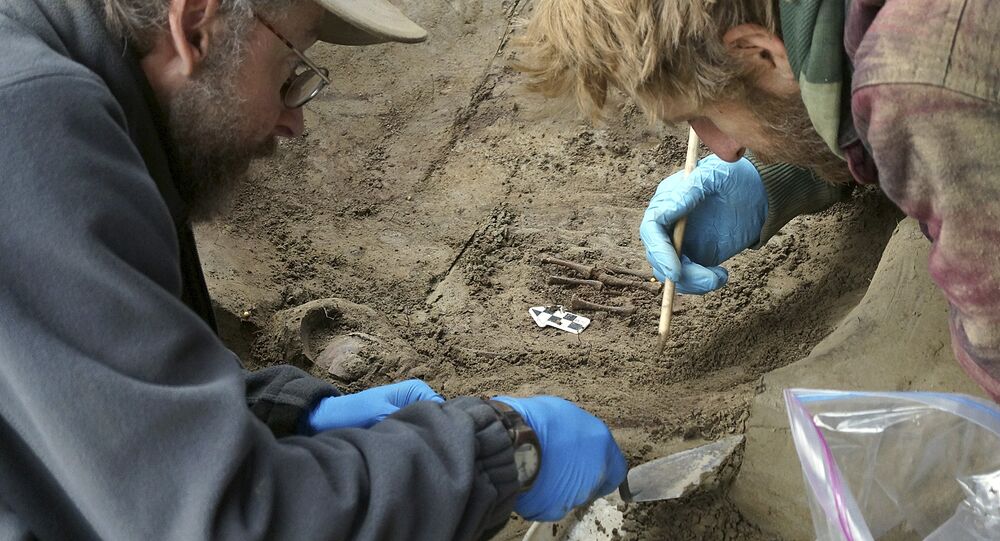 The remains of an infant girl unearthed in Alaska suggest that she belongs to a previously unknown, ancient group of people who might have migrated to North America from Siberia about 20,000 years ago.

According to the results of a genetic assessment published in the January 3 issue of Nature, the girl, who was just six weeks old when she died,  belongs to an ethnic group predating and genetically distinct from North America’s dominant indigenous populations.

The skeleton of the Sunrise Girl-Child, so named after the Upward Sun River archaeological site where she was found in an ancient burial pit in 2013, is approximately 11,500 years old.

© Photo : Rokna twitter
Remains of a 'Giant' Discovered Alongside Ancient Treasure Trove in Iran
Scientists say that what they have learned from her DNA indicates that her ancestors likely entered Alaska around 8,500 years earlier moving across the Bering land bridge that once connected Asia and North America and what is now the Bering Strait.

"These are the oldest human remains ever found in Alaska, but what is particularly interesting here is that this individual belonged to a population of humans that we have never seen before," said Professor Eske Willerslev of the University of Copenhagen, a co-author of the new study.

“So, you can say she comes from the earliest, or most original, Native American group […] and that means that she can tell us about the ancestors of all Native Americans," Dr. Willerslev told BBC News.

He added that the discovery of further remains in north-east Siberia and Alaska would give scientists more information to work with.

Ben Potter, the paper’s lead co-author and a professor of anthropology at the University of Fairbanks, Alaska, said that  this new research really only opens the door to more study of the new population, and how it may have interacted with the ancestors of North America’s modern-day Athabaskan, Dene and Inuit populations.