David Kramer, a former State Department employee and currently a senior fellow at the nonprofit McCain Institute, has been directed to appear before investigators on January 11.

An associate of Rep. Senator John McCain has been subpoenaed by the House Intelligence Committee over his reported knowledge of the names behind the infamous dossier on President Donald Trump.

According to Fox News, Committee Chairman Devin Nunes issued a subpoena to David Kramer, a former State Department employee who now serves as a senior fellow at the McCain Institute for International Leadership, on Wednesday to obtain information about his meeting with Christopher Steele, a former British spy and the author of the dossier, the contents of which have not yet been confirmed.

The committee told Fox News that Kramer visited Steele in London in November 2016, where he reportedly received information and a copy of the document, which he delivered to McCain upon returning home. The senator gave the dossier to the FBI in December 2016.

Kramer already spoke to investigators in early December and, according to the report, has been ordered to appear before the Committee once again on January 11.

The Trump-Russia dossier was first published by BuzzFeed a few days before his inauguration in January. The 35-page document was written by Steele, who was hired by the research firm Fusion GPS, which later turned had received funding by the Hillary Clinton campaign. 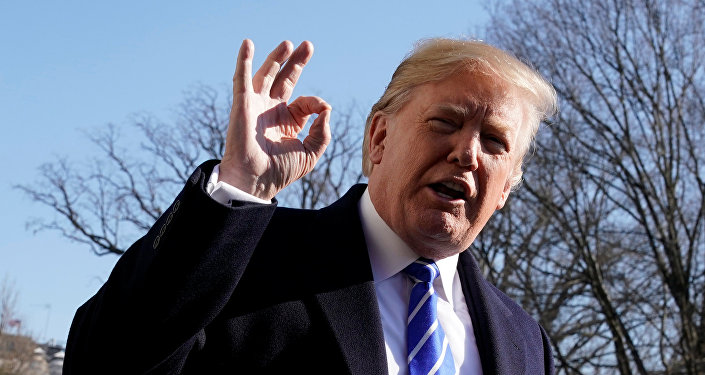 © REUTERS / Yuri Gripas
Year in Review: Trump-Russia Probes Dominate US Headlines, False Reports Fuel Hysteria
In particular, the document alleged that the Russian government had collected compromising information about Trump, which has been denounced by the US president and called a forgery by Moscow.

On Tuesday, Trump one again commented on the dossier, calling it "bogus" and a "Crooked Hillary pile of garbage" which his opponents used to "go after" his campaign.

WOW, @foxandfrlends “Dossier is bogus. Clinton Campaign, DNC funded Dossier. FBI CANNOT (after all of this time) VERIFY CLAIMS IN DOSSIER OF RUSSIA/TRUMP COLLUSION. FBI TAINTED.” And they used this Crooked Hillary pile of garbage as the basis for going after the Trump Campaign!

​At the moment, two separate probes — dubbed a "witch hunt" by the US president — are being conducted by the US Senate and special counsel Robert Mueller into the Trump campaign's alleged "collusion" with Moscow, a claim that has been called "groundless" by the Kremlin.