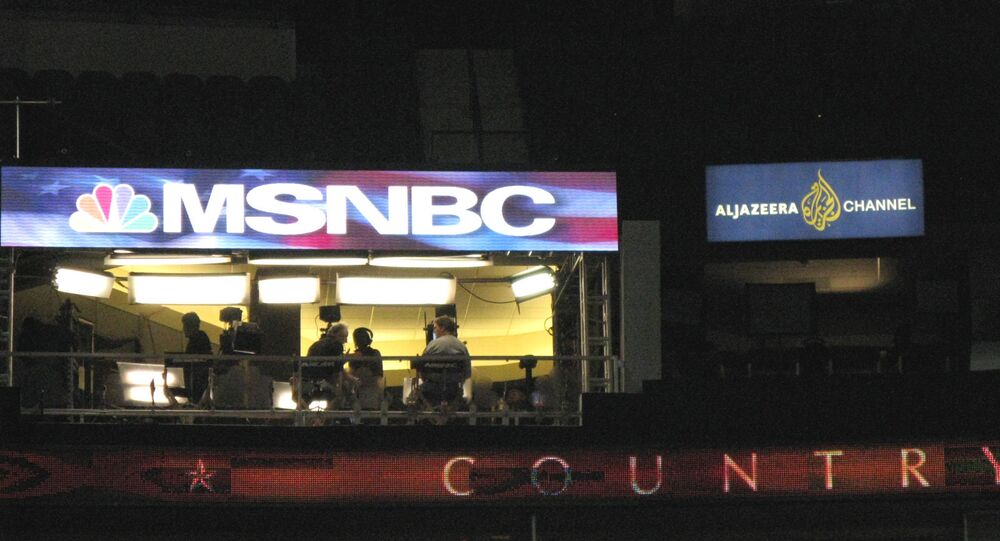 The Russiagate hysteria has reached a new low on mainstream US TV, where an expert on MSNBC claimed Republicans are being blackmailed or threatened by their own president.

"I think it's possible some of these GOP players are greedy and opportunistic," Kendzior replied. "I also think they're being blackmailed or threatened." Kendzior alleged that the Republican National Committee had been hacked, as had Graham's personal emails, suggesting that compromising information on him and other Republicans could be circulating. "[W]e know that Trump has a long track record of blackmailing and threatening those who he sees as his political opponents. That goes back throughout his entire career."

"There's also the issue of contamination in the sense of the Russia investigation," she said, "and certain individuals may not want to be investigated for their role in taking" money from Russian oligarchs.

Graham is one such individual, Kendzior said.

Graham, however, has been one of the loudest Russophobes in Washington.

WATCH: Sen. @LindseyGrahamSC responds to Trump's call to work with Russia, saying it's not the dumbest idea "but it's pretty close." #MTP pic.twitter.com/8eK1y7A25a

​And indeed, the South Carolina Republican has been critical of the president in the past — as has almost every single establishment Republican in office, particularly those who ran against Trump in the primary, as Graham briefly did. In February 2016, Graham called the then-candidate a "kook," saying "I think he's crazy. I think he's unfit for office." He would in late November 2017, with Trump as his president and party leader, accuse the media of branding Trump kooky and unfit to serve.

Republicans' mind-blowing hypocrisy in their attempt to attack the media, everyone: pic.twitter.com/EKfXQGUeiu

​Politics has a way of making strange bedfellows. Barack Obama and Hillary Clinton fought tooth and nail in the primary race to become the Democratic presidential nominee. Clinton scoffed at Obama's limited international experience, including during a February 2008 speech pointing out that, "We've seen the tragic result of having a president who had neither the experience nor the wisdom to manage our foreign policy and safeguard our national security. We can't let that happen again." Clinton's campaign was also accused of spreading photos of Obama wearing traditional Somalian clothes for a ceremony in order to insinuate that the man who would become the US' first black president wasn't American enough.

That fighting, too, ended after the primary. Citing thick skin the candidates grew during the ruthless primary, Obama said in 2013, "We kind of have a block — a screen from a lot of the silliness that happens during presidential campaigns… by the time Hillary joined the administration, I felt very confident and comfortable in our working relationship."

Following the recent passage of the highly touted tax reform bill, Graham tweeted: "Great to be a part of a winning team when it comes to cutting taxes. I appreciate President Trump's leadership and am also very proud of Tim Scott who played a pivotal role in passing first major tax reform in over 30 years."

The reason Graham changed his tune, according to MSNBC's guest, is because Trump is blackmailing him and others in the Republican party — not because tax reform has been the number one priority of virtually every Republican for decades.

Among more sober media outlets than MSNBC, the degradation of sound reasoning and skepticism on network news has not gone unnoticed.

In an essay released in late December to be published in next month's issue of the London Review of Books, historian Jackson Lears writes, "For about a week after the election, pundits discussed the possibility of a more capacious Democratic strategy. It appeared that the party might learn something from Clinton's defeat. Then everything changed."

"A story that had circulated during the campaign without much effect resurfaced: it involved the charge that Russian operatives had hacked into the servers of the Democratic National Committee, revealing embarrassing emails that damaged Clinton's chances. With stunning speed, a new centrist-liberal orthodoxy came into being, enveloping the major media and the bipartisan Washington establishment," Lears said.

"Responsibility for the absence of debate lies in large part with the major media outlets. Their uncritical embrace and endless repetition of the Russian hack story have made it seem a fait accompli in the public mind. It is hard to estimate popular belief in this new orthodoxy, but it does not seem to be merely a creed of Washington insiders. If you question the received narrative in casual conversations, you run the risk of provoking blank stares or overt hostility — even from old friends. This has all been baffling and troubling to me."