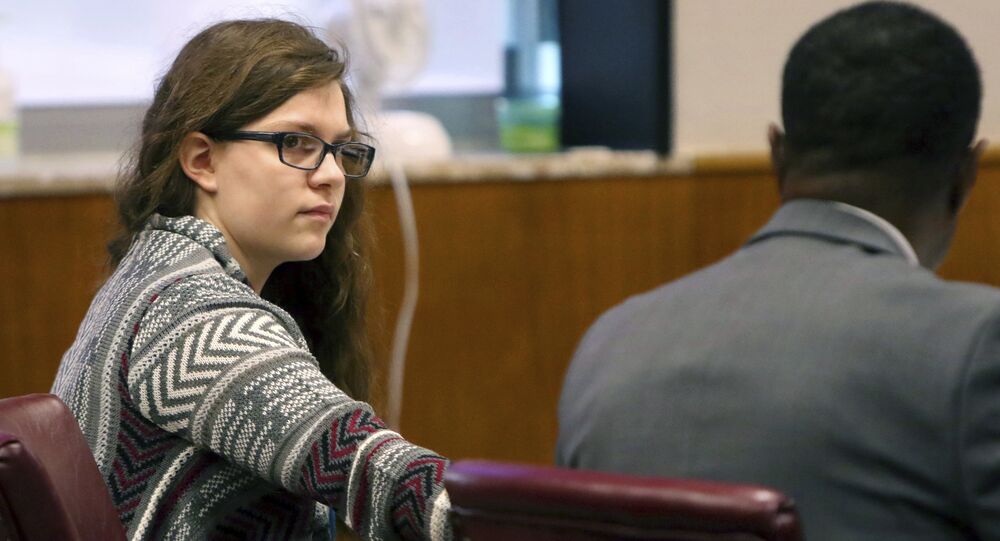 Anissa Weier, one of two teens who attempted to kill a classmate in 2014, was sentenced Thursday to 25 years in a mental hospital.

© Sputnik / Vitaliy Belousov
Florida Teacher Arrested for Engaging Teen in ‘Extremely Vulgar' Sex Chat
Weier, who claimed she wasn't responsible for her actions because she was mentally ill, pleaded guilty in August to being a party to attempted second-degree intentional homicide, AP reported.

According to reports, Weier's sentence is retroactive to the date of the crime, which means the now 16-year-old is to be institutionalized until the age of 37.

Weier, aided by Morgan Geyser, lured fellow classmate Payton Leutner into a wooded area in a park in Waukesha, Wisconsin, back in 2014. Once out of sight, Geyser began to stab Leutner 19 times as Weier encouraged her to continue. Leutner, who managed to crawl out of the woods, survived the attack after a passing bicyclist called authorities. All the girls were 12 when the incident occurred.

Once apprehended, Weier and Geyser told detectives that they had to kill Leutner in order to please a fictional horror character named Slender Man. Per Weier and Geyser, had they not committed the act the fictitious figure would have harmed them and their families.

Prior to her sentencing, Weier told Judge Michael Bohren that she holds herself accountable and "that I will do whatever I have to do to make sure I don't get any sort of delusion or whatever again."

© Sputnik / Valeriy Melnikov
US Teen Gets Suspended Sentence for Vandalism at Auschwitz
In response to the sentencing, Leutner's family issued a statement via Steve Lyons, the family spokesperson, saying they "believe justice is served," and that the move will allow Payton and company "some additional closure."

Geyser, Weier's accomplice, who actually did the stabbing, is scheduled to be sentenced in February. She pleaded guilty to attempted first-degree intentional homicide with the agreement that she is not criminally responsible and should not go to prison.

Prosecutors have requested Geyser be sentenced to at least 40 years in a mental hospital, AP reported.

Dating back to an online post in 2009, the character of Slender Man is a mysterious "spidery" figure who is often depicted in a black suit with a white, expressionless face, and about whom a great deal of horror lore has been written on the internet.

‘Day of Rage’: Violence Erupts in Athens in Memory of Teen Killed by Police