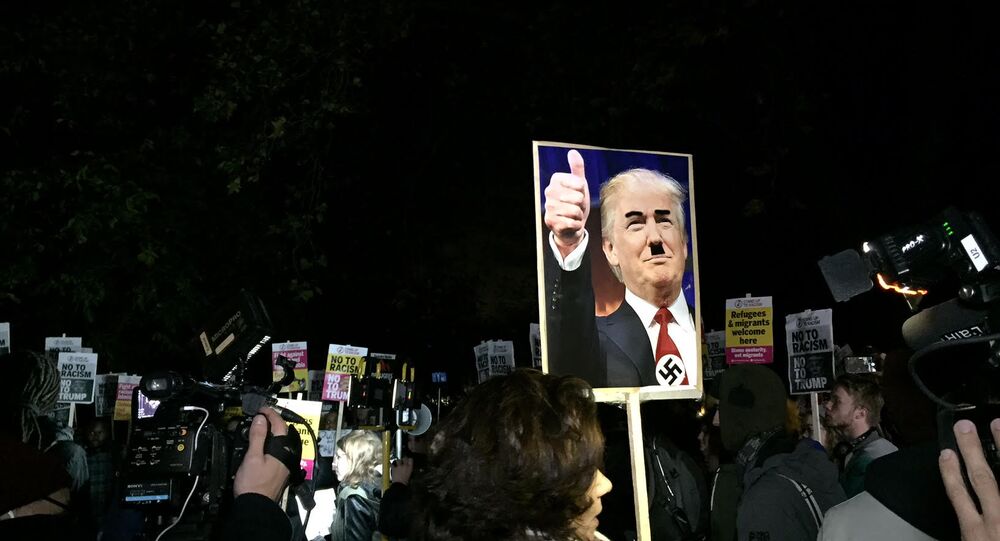 WASHINGTON (Sputnik) - From record-breaking protests in support of women’s rights to deadly clashes over white nationalism, the events of 2017 have cast a spotlight on the decades-old struggle for civil rights and equality in the United States.

President Donald Trump took office on January 20 after pledging to pursue a series of controversial policies such as a crackdown on illegal immigration and a travel ban to block Muslims from entering the United States.

Just one day later, millions of people joined massive protests in Washington, New York, Los Angeles, Chicago and other US cities to decry Trump’s contentious comments and proposals, accusing him of targeting minority groups, including women, Mexican immigrants and Muslims.

The rest of the year was punctuated by a number of noteworthy events that both dominated the national news cycle and generated fresh debate about the state of civil rights and liberties in the country.

The Bigotry of Trump's Muslim Ban

Just days after taking office, Trump on January 27 signed an executive order that fulfilled a key campaign promise to impose what he called a "Muslim ban."

The order, which barred nationals from seven Muslim-majority countries — Iran, Iraq, Libya, Somalia, Sudan, Yemen and Syria — from entering the United States, sparked spontaneous protests at airports across the country.

Trump defended his order as necessary to protect the homeland from the threat of terrorist attacks, but his critics said the move violated the US Constitution by unlawfully discriminating against Muslims.

On that basis, the American Civil Liberties Union (ACLU) and other US advocacy groups, as well as several state attorneys general immediately launched legal challenges against Trump’s ban.

On January 28, only one day after Trump signed his executive order, a federal judge in New York blocked the Trump administration from implementing the ban, kicking off an ongoing legal battle over the measure.

Since then, Trump revised his executive order, issuing a second ban on March 6 that was also struck down. On September 24, he signed a third version of the Executive Order that banned citizens from Chad, Iran, Libya, North Korea, Somalia, Syria and Yemen, as well as government officials from Venezuela.

The fate of the third ban will ultimately be determined by the courts. But civil rights activists and advocacy groups say Trump’s newest version of the ban still represents a form of discrimination against Muslims.

"Instead of promoting the values that lifted up this nation, Donald Trump is still pandering to an extremist base that considers itself superior to other Americans," Council on American-Islamic Relations Legal Director Albert Fox Cahn told Sputnik.

© AP Photo / Susan Walsh, File
Two in Five Americans Favor Trump Impeachment Hearings
Cahn and others also said the president’s attempts to ban Muslims from the US represent an example of the deep-seated bigotry and racism that have bedeviled the United States since the days of slavery.

America’s deep racial divisions were again exposed in August, when a protest in the US city of Charlottesville turned violent.

On August 12, white nationalists rallied against the city’s plans to remove a statue of Confederate general Robert E. Lee, who many citizens view as a symbol of racism and America’s slaveholding history.

Clashes erupted between the white nationalists and counter-demonstrators, with the violence culminating when a Nazi supporter slammed his car into a group of counter-protesters, killing 32-year-old Heather Heyer and injuring 19 others.

Trump stirred considerable controversy by initially refraining from commenting on the violence.

Days later, the president appeared to cast equal blame on both the protesters and counter-demonstrators, saying the events in Charlottesville were a "display of hatred, bigotry and violence on many sides."

Trump subsequently faced fierce criticism for his failure to directly condemn the protesters who displayed swastikas and chanted racist and white supremacist slogans at the Charlottesville rally.

Activists accused Trump of keeping his silence in order to appease the white conservatives who helped him get elected as president.

"The current administration has undeniably been complicit in willfully and deliberately inciting physical and rhetorical violence perpetrated by their neoconservative base," activists from the Boston chapter of the Black Lives Matter Network told Sputnik.

Racism's Resurgence in the US?

© REUTERS / Jim Bourg
UN Warns: Charlottesville Violence Indicates US Racism, Xenophobia on the Rise
The events of 2017 have led many to conclude that Trump’s presidency has exacerbated race relations in the United States.

A Pew Research Center poll released on December 19 showed that 60 percent of Americans believe Trump’s election has led to worse race relations in the United States.

The poll also revealed that a majority of Americans — 65 percent — say there are still "very strong" or "strong" conflicts between whites and people of color in the United States.

Evidence compiled by US law enforcement officials seems to support the belief that racial tensions escalated as a result of the Trump phenomenon and his presidential victory.

But while many are convinced that Trump is responsible for racism’s resurgence in the United States, civil rights scholars point out that white supremacy has long been embedded in American culture.

"Trump has not introduced anything new into the culture, into the politics or into the political culture," Wilmer Leon, a national radio talk show host and political science professor at Howard University, told Sputnik. "I think he has just made a lot of people feel more comfortable in expressing their bigotry, their hatred, their xenophobia and their racism."