This is not the first violent incident, involving the former Alaskan governor's son, who was earlier detained on suspicion of hitting his former girlfriend.

This Monday, Track Palin, the eldest son of the governor of Alaska, Sarah Palin, was arrested for beating up his father, Todd Palin, at a family home.

The affidavit filed by police officer Adam LaPointe revealed that the conflict was sparked by a telephone dispute over the ownership of a truck with Todd telling his son not to come pick up the car, as he was drinking and taking prescription drugs at that time.

"Track told him he was [going to] come anyway to beat his ass," the document read. 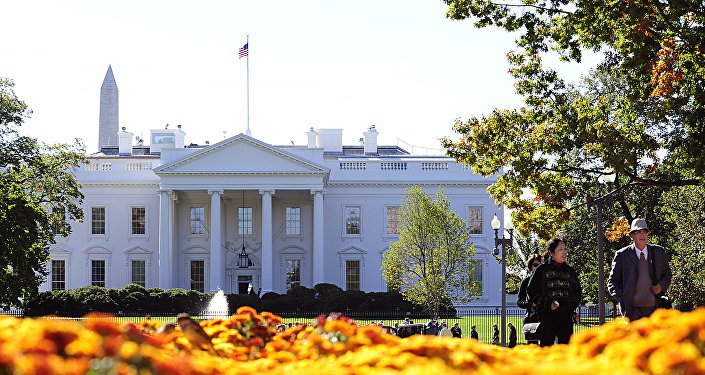 © AFP 2019 / KAREN BLEIER
Can't Take Them Anywhere: Palin and Pals Goof Off in White House, Get Schooled
Todd Palin then confronted his offspring at the door with a gun, yet the 28-year-old managed to break into the house and started beating up his dad, inflicting significant injuries to his head.

Sarah Palin then called the police to the scene, claiming that the younger Palin was "freaking out and was on some type of medication."

Upon arriving, the responding officers found the older Palin bleeding from a number of wounds to the head.

Track Palin is perfect example of who should no longer be carrying a weapon! Beats up his father and was previously arrested for domestic violence against a female and charged with carrying weapon while intoxicated. Take his gun away!!!

When they approached the younger Palin, he called them "peasants" and told them to drop their weapons before fleeing to the roof of the house.

© AP Photo / Mary Altaffer
You Betcha! Donald Trump Gets Sarah Palin Endorsement
He was eventually apprehended by the law enforcement officers and charged with burglary, assault and criminal mischief.

"Given the nature of actions addressed… by law enforcement and the charges involved, the Palins are unable to comment further."

"They ask that the family's privacy is respected during this challenging situation just as others dealing with a struggling family member would also request," the statement read.

Sarah Palin, who was John McCain's running mate in the 2008 presidential elections, driving on a platform of conservative Republicanism, landed in hot water in 2016, when Track was charged with assaulting his girlfriend.

Palin refuses to rule out war with Russia over Georgia

Watch Out, Palin: Russia Plans to Compete With Alaska for Tourist Flow