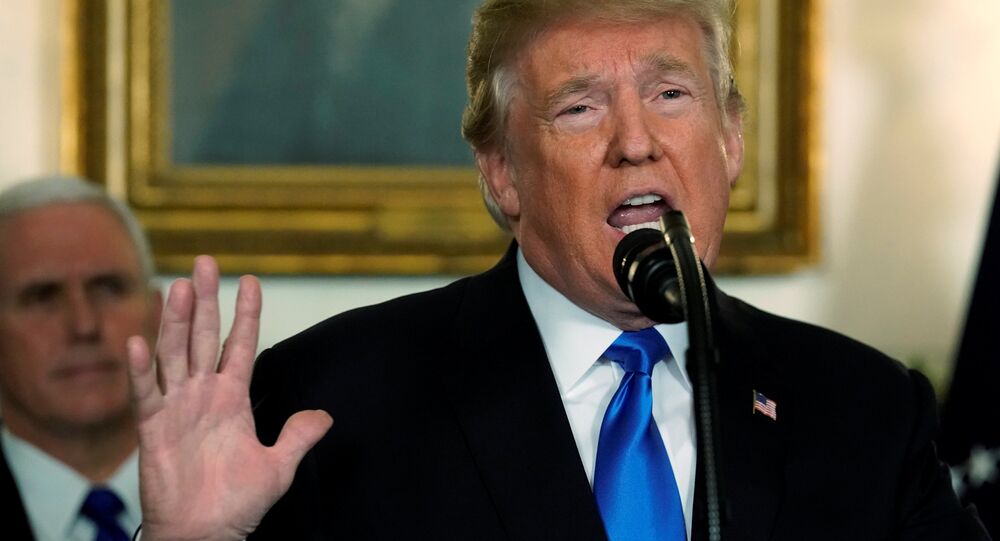 On Monday, US President Donald Trump unveiled his first National Security Strategy, outlining the major threats facing the country, as well as his administration's plans to address them.

WASHINGTON (Sputnik) – The new US National Security Strategy supports American dominance and independence in the energy sector, US President Donald Trump stated on Monday during his speech following the unveiling of the document.

Meantime, the United States is also seeking a partnership with Russia and China, but in a way that protects US national interests, US President Donald Trump stated on Monday.

"We also face rival powers, Russia and China that seek to challenge American influence, values and wealth," Trump said. "We will attempt to build a great partnership with those and other countries but in a manner that always protects our national interest."

Since taking office, Trump has rolled back regulations that hindered the construction of domestic pipeline projects such as the Dakota Access and Keystone XL pipelines.

"The strategy … embraces a future of American energy dominance and self sufficiency," Donald Trump said in a speech.

This National Security Strategy and its four themes are guided by a return to principled realism and form the backbone of President Trump's commitment to put America first. Read more: https://t.co/aJIkbYrNUK pic.twitter.com/oLPgT8nT5H

The United States recently started to export LNG to some European countries and is eager to strike long-term contracts in addition to limiting Russian supplies.

The Nord Stream 2 AG said in August that the US sanctions threat against Russia was an attempt to undermine the position of a future commercial competitor.

US to Work Closely With Foreign Allies to Implement New Strategy

US Secretary of State Rex Tillerson said in a statement on Monday that the United States will closely work with both federal agencies and international partners to implement the new National Security Strategy.

"President Trump’s new National Security Strategy brings to bear all elements of American power to protect our people, generate new economic opportunities, and advance our interests and democratic principles," Tillerson said. "The State Department will work closely with other federal agencies and our allies and partners around the world to implement this strategy."

© AP Photo / Susan Walsh, File
US to Reportedly Unveil National Security Strategy With Russia Among Key Threats
Tillesron noted that the United States faces both unconventional threats from non-state actors and challenges to its economic and national security from traditional state actors.

“Whether the threats are rogue nations seeking nuclear weapons, terrorists plotting to attack our homeland, or malicious cyber actors seeking to damage and destabilize our critical systems and infrastructure, we must remain vigilant against those who would do harm to our people and our way of life,” he said.

North Korea Issue 'Will Be Taken Care Of'

The United States has no choice but to take care of the North Korea issue, which should have been resolved by previous administrations, President Donald Trump said in a speech on Monday.

"This situation [North Korea] should have been taken care of long before I got into office, when it was much easier to handle. But it will be taken care of. We have no choice," Trump said.

© REUTERS / Carlos Barria
Aggressive New US Security Strategy Revealed
The United States and its partners have coordinated efforts in putting maximum pressure on North Korea and will take all necessary steps to isolate the regime of Kim Jong-un, Trump said, adding that there was still a lot more work to do.

According to the US National Security Strategy, the United States will be ready to respond to any aggressive action from North Korea with overwhelming force.

The last US National Security Strategy was issued by former President Barack Obama on February 6, 2015.