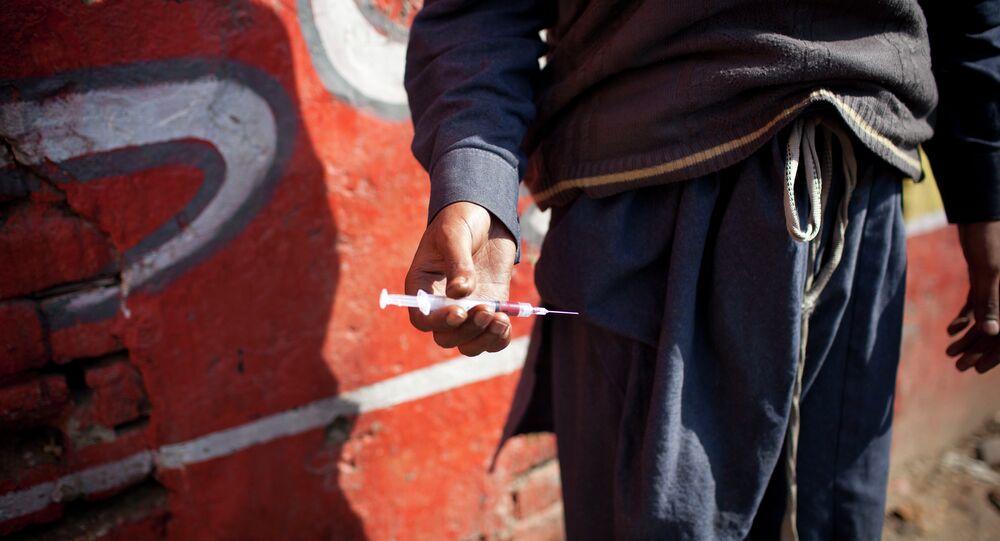 Health officials in the US state of Massachusetts claim HIV infections among needle users are on the rise, despite the state’s best efforts to eradicate the virus.

The Massachusetts State Department of Public Health has released figures saying that there were about 70 new cases of HIV among intravenous drug users since January 1. The statistics, which separate patients into different categories, say drug users, who sometimes share needles, are the only category of patients seeing infection numbers rise. They represent 14 percent of all HIV cases this year.

© Sputnik / Sergei Veniavskiy
Man Sues Medical Centers for HIV Misdiagnosis
For the last few years, drug users have made up only 4 to 8 percent of all cases of human immunodeficiency virus. Other categories are on a steady downward slope, officials say.

Massachusetts, which, according to the Boston Globe, is proud to be "national leader in stopping the spread of the virus," says that the spreading opioid epidemic might undermine and undo all gains in attempts to curb the disease.

"It's very worrisome, and we're trying to get the word out," said Dr. Alfred DeMaria, medical director for the department's Bureau of Infectious Disease Prevention. "Basically, all the other risk categories for HIV infections have been on a downward trend, while this category is going up."

"This is likely to be an early signal of a potential outbreak. And we really need to address it right now," DeMaria says.

Due to the ongoing opioid abuse epidemic, five people a day die of overdoses across the state, the Boston Globe reports.

According to Carl Sciortino, executive director of the AIDS Action Committee of Massachusetts, the uptick in HIV infections among drug users is "alarming but frankly not surprising, given what is happening with the opioid crisis."

In Massachusetts, clean needles and syringes are sold freely over the counter, and needle exchange programs exist to provide drug users with clean needles. However, correlating the rise of HIV and hepatitis C cases suggests drug users are poorly educated about proper needle use and continue sharing syringes, despite all efforts.

"Unfortunately, right now there isn't a lot of money to work with to expand those programs," Sciortino said, according to the Daily News of Newburyport.

State health authorities fear a repeat of the 2015 HIV and hepatitis С outbreak in Scott County, Indiana, when 180 cases of the diseases were traced back to sharing needles with a single infected person.

UN Voices Alarm Over Up to 40% Rise of HIV Cases in Egypt, Mostly Among Youth