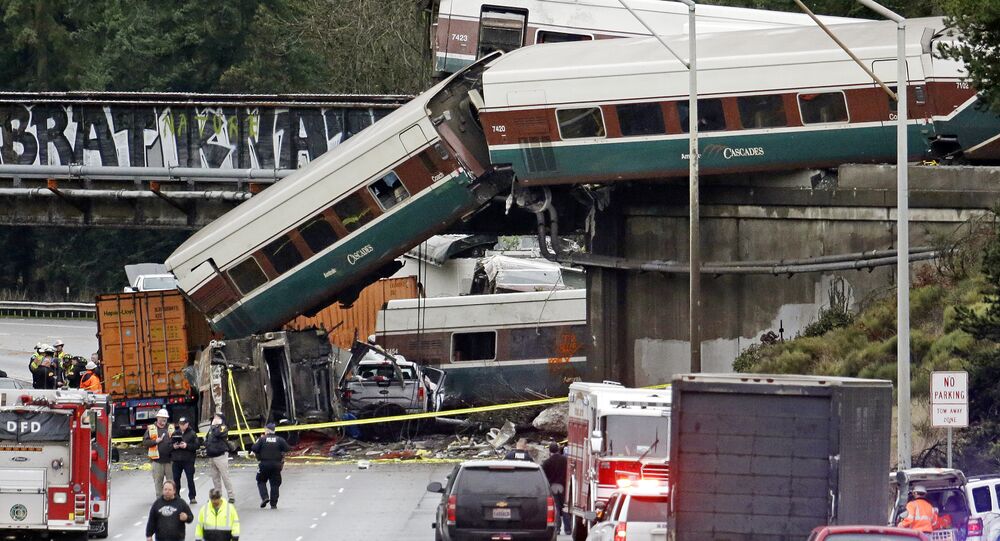 An Amtrak train hurtled over a bridge across Interstate 5 in Washington State on Monday, which the Associated Press reported led to the deaths of six people and an estimated 77 injuries.

Amtrak reported in a statement that 78 passengers and five crew members were aboard the train when it crashed, though authorities later reported that there were in fact seven crew aboard and 77 passengers. All 13 of the Amtrak's cars were derailed, and at least five cars were hit by the train as it came off its tracks.

Well into the evening it was still unknown how many more dead might be in areas emergency workers could not get to. Mayor Michael Courts of nearby DuPont, Washington, told CNN he didn't think the death toll would be known for some time. "They have not gotten into the depths of the train or lifted the cars," he said Monday evening.

LISTEN: @Amtrak conductor calls dispatch for help after train derails on I-5.

“We’ve got cars everywhere and down onto the highway!” pic.twitter.com/scEkKhVzlX

The derailment occurred in DuPont, 40 miles south of Seattle and just outside Tacoma, Washington. It also happened on the first day of a new route for Amtrak trains moving between Tacoma and the state capital of Olympia.

State transportation authorities reported that the $181 million new route passes over Interstate 5 which allows the trains to reach a higher speed of 79 miles per hour, shortening the commute time. However, Amtrak reported the train to have exceeded its maximum speed, and was traveling at 81 mph at the time of the crash.

Local sources reported that Don Anderson, mayor of the nearby town of Lakewood, opposed the new route because of what he called insufficient safety measures.

The mayor told local source KOMO on December 5 that the new route would lead to a deadly accident. "Come back when there is that accident, and try to justify not putting in those safety enhancements, or you can go back now and advocate for the money to do it, because this project was never needed and endangers our citizens" Anderson said.

Although it has been speculated that the new route may be connected to the crash, the reason remains unknown at this time. Preliminary reports deny that the crash was the result of a maintenance issue. A press conference is slated for 2 PM local time.

Passengers told local news stations that they had to escape the train by kicking out windows after the emergency doors failed to open.

#BREAKING: Reported mass casualty event as an Amtrak train has derailed in Pierce County — Washington State. Part of the train appears to have fallen onto Interstate 5. Pic @wsdot_tacoma pic.twitter.com/JwCiYaWx67

Washington governor Jay Inslee has declared a state of emergency in the affected counties of Pierce and Thurston. State militia, as well as the National and State Guards, were deployed to the scene. Amtrak service south of Seattle has been suspended.

"Something went very, very wrong and there are some questions we will demand to be answered," said Rep. Denny Heck (D-WA) in a statement. "It's a nightmarish image."

The crash attracted national media attention, with US President Donald Trump acknowledging the tragedy in a tweet. He also pushed for infrastructure reform, which was one of hislandmark and highly-anticipated campaign promises.

The train accident that just occurred in DuPont, WA shows more than ever why our soon to be submitted infrastructure plan must be approved quickly. Seven trillion dollars spent in the Middle East while our roads, bridges, tunnels, railways (and more) crumble! Not for long!

Amtrak's approach to safety was also criticized by the National Transportation Safety Bureau (NTSB) in November. "Amtrak's safety culture is failing, and is primed to fail again, until and unless Amtrak changes the way it practices safety management," NTSB Chairman Robert L. Sumwalt said in a statement.

"Investigators found a labor-management relationship so adversarial that safety programs became contentious at the bargaining table, with the unions ultimately refusing to participate."

NTSB is launching a go-team to investigate the Amtrak passenger train derailment in the State of Washington. Team will depart DC today. Additional information to follow when available.