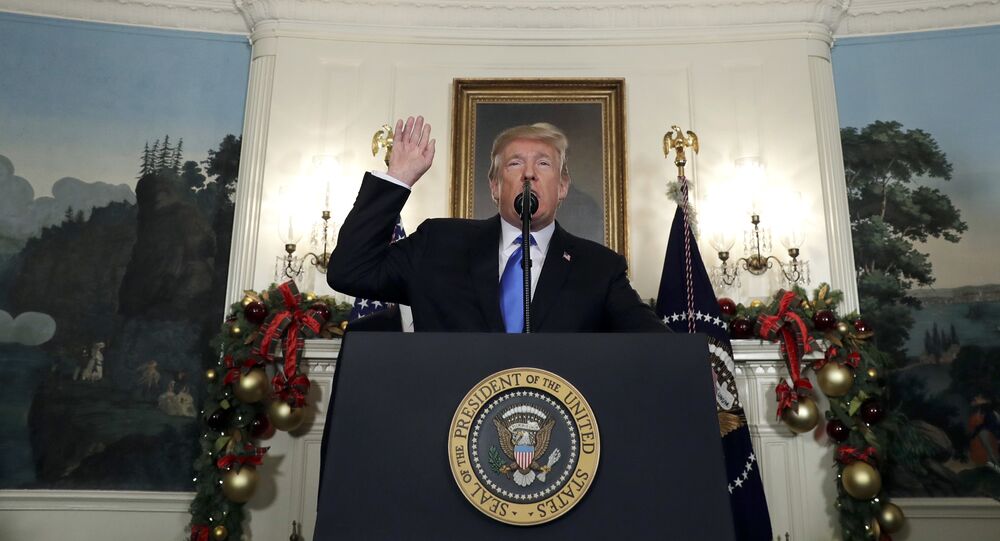 US President Donald Trump announced a new National Security Strategy on Monday that emphasizes the president’s “America first” message and is intended to return the country to "unrivaled power."

The four pillars of the strategy are protecting the US populace and the homeland; promoting US prosperity; preserving "peace through strength" and a strong military; and increasing US influence abroad, according to a draft of the NSS document shared with multiple news outlets.

The strategy is based on "realism," Trump said, and while the US will pursue a "great partnership" with China and Russia, the administration will do so "in a manner that always protects our national security." He used as an example the help the CIA provided Russia over the weekend in foiling a terror plot in St. Petersburg that could have killed "perhaps thousands," and for which Russian President Vladimir Putin called over the weekend to express thanks.

US "weakness" is coming to an end, Trump said. "Unrivaled power is the most certain means of defense."

The president also spoke about "economic security" as a vital element to national security strategy. Partnerships will be based on "cooperation and reciprocity" moving forward, the president said, and less tethered to ideology. America won't seek to export its values abroad, he said, but it will champion them "without apology."

"Strengthening our sovereignty — the first duty of a government is to serve the interests of its own people — is a necessary condition for protecting those four national interests," the NSS document reads. The written strategy takes aim at "the revisionist powers of China and Russia; the rogue states of Iran and North Korea; and transnational threat organizations, particularly jihadist terrorist groups," as its main challenges.

An official involved in preparing the document told Axios, "[it's] hard to say the document is cohesive… The doc doesn't reflect a lot of input from" the State Department and intelligence community, but instead "fits a domestic political narrative."

In addition to discussing upcoming tax cuts, Trump touched on job growth, the "disastrous" trade deals of prior administrations and the need to strengthen borders. He also demanded that Congress end the "damaging defense sequester," which limits the US Defense Department's budget. "We're going to get rid of that," Trump said about the spending caps.

Trump frequently blasted China on the campaign trail for alleged unfair trading practices, such as artificial currency devaluation. Since becoming president, though, Trump has softened his stance toward Beijing in an effort to secure more assistance on issue areas relating to the Korean Peninsula.

Chinese Foreign Ministry spokeswoman Hua Chunying told reporters in China Monday that while she would only be able to comment on the document after it was made public, in principle she said US-China trade is a win-win situation for both parties.

While Trump’s National Security Strategy document frames China as a strategic and economic rival to the US, Beijing is “willing to work hard with the US side to dedicate ourselves to building a robust, stable and healthy trade and economic relationship,” the foreign ministry spokeswoman noted.

US, Russia 'Need Each Other' to Set Program to Boost Int'l Security - Antonov