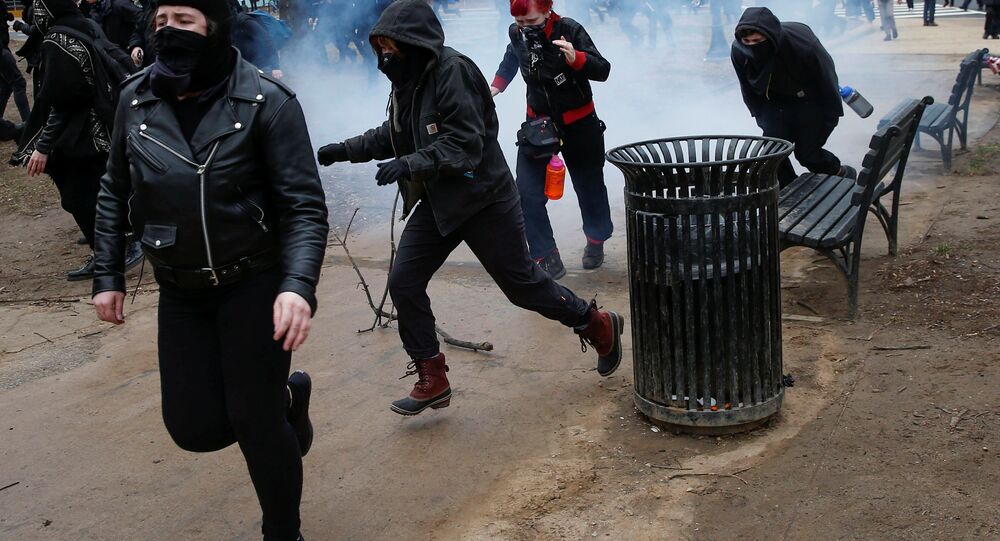 In what was described as a “huge victory” by Metro DC Democratic Socialists of America, a federal judge on Wednesday dropped the felony riot charges against the first six of the more than 160 J20 protesters currently facing trial for alleged crimes committed during protests against US President Donald Trump’s inauguration on January 20.

The judge decided to drop the felony riot charges after character witnesses testified on Tuesday that the protesters facing trial were peaceful during the demonstrations.

During the weeks of testimony, prosecutors collected videos of property destruction from security cameras and cellphones and questioned police officers and store owners. Despite lacking evidence that the defendants on trial personally caused that damage, prosecutors are still claiming that all the protesters involved bear responsibility. Instead of evaluating each defendant's case individually, attorneys are making each and every defendant responsible for any criminal actions committed by any of the others who were arrested during the protests.

"The prosecution has no evidence to demonstrate that the people who faced trial are responsible for the charges they face. The judge agreed with the defense that all of the evidence provided by the prosecution cannot be interpreted by a reasonable jury to include indictment, even though the government spent five weeks presenting their case exhaustively. They had lots of powerpoints and lots of testimony but it was still a weak case," Sam Menefee-Libbey, spokesperson for Dead City Legal Posse, a group of activists and legal support workers in DC helping support the protesters, told Sputnik.

Menefee-Libbey is not surprised that the judge agreed with the defense.

"This is something that we anticipated — for the government's case to be weak. They blanket charged everyone with some serious felonies and we are cautiously optimistic for what this could mean for future defendants."

Menefee-Libbey also pointed out that the six defendants currently facing trial could still be charged with five felonies and two misdemeanors including property destruction. If convicted, they could face a maximum of 51 years in prison.

One of the six defendants on trial now is Alexei Wood, a San Antonio photojournalist, who captured the January 20 protest through livestream video.

Wood's footage was used as evidence to convince DC Superior Court Judge Lynn Leibovitz to drop the charges. Wood's video shows him taking digital-camera photos from the sidelines. He is also seen running in front of the group of demonstrators to get a different angle. Occasionally, Wood is heard yelling "Whoo!" as he tapes protesters spray-painting buildings and throwing rocks through windows. He is also seen pointing the camera to himself to document his reactions to the protest. Toward the end of the footage, Wood flashes his badge to identify himself as a media staffer when police intervene.

"Criminal laws should require criminal intent, and so if a journalist is covering the story, that does not constitute criminal intent," Alexandra Ellerbeck, North America program coordinator for Committee to Protect Journalists, said to the New York Times recently.

"He [Wood] wasn't vandalizing property, and the charges against him are incredibly extreme," Wood's lawyer, Brett E. Cohen, recently expressed to the paper.

Wood could have faced up to 61 years in prison if convicted of the rioting and destruction of property charges against him.

"The government has not informed me as to why Mr. Wood's case involved any greater degree of culpability than [that] of the other journalists who were ultimately not charged," Cohen added in a recent email to the New York Times.

There are still more than 160 defendants waiting to face trial. If convicted, some of these protesters could be sentenced to decades behind bars.