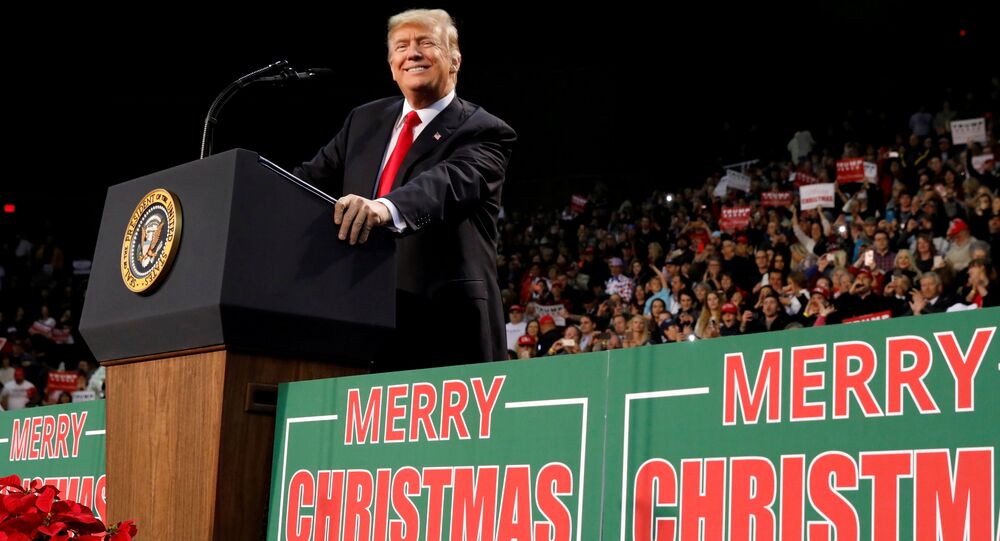 On Saturday, the US President was campaigning at the Pensacola Bay Center where he accused The Washington Post journalist Dave Weigel of posting "phony" pictures on Twitter about Trump's Rally.

David Weigel was covering the political event in Florida and tweeted some photos of the venue, showing the half empty arena during Trump's Rally. According to US media reports, these pictures instantly went viral on the web thus attracting the President's attention. Trump has slammed Weigel and demanded immediate deletion of the controversial pictures.

.@DaveWeigel @WashingtonPost put out a phony photo of an empty arena hours before I arrived @ the venue, w/ thousands of people outside, on their way in. Real photos now shown as I spoke. Packed house, many people unable to get in. Demand apology & retraction from FAKE NEWS WaPo! pic.twitter.com/XAblFGh1ob

​Trump also demanded Weigel apologize for publishing a photo of the empty arena as it had been made hours before the president's arrival and many people had not come yet. Weigel confirmed that the tweet was a mistake and apologized for issuing the photo.

"@daveweigel of the Washington Post just admitted that his picture was a FAKE (fraud?) showing an almost empty arena last night for my speech in Pensacola when, in fact, he knew the arena was packed (as shown also on T.V.). FAKE NEWS, he should be fired," Trump wrote on his Twitter page.

Sure thing: I apologize. I deleted the photo after @dmartosko told me I'd gotten it wrong. Was confused by the image of you walking in the bottom right corner. https://t.co/fQY7GMNSaD

However, US President Donald Trump was not satisfied with frank apologies and instant response by The Washington Post journalist and suggested firing Weigel.

Earlier on in the day, Trump again blasted CNN over alleged spreading of "Fake News," sarcastically urging the broadcaster to rename its main slogan.

Fake News CNN made a vicious and purposeful mistake yesterday. They were caught red handed, just like lonely Brian Ross at ABC News (who should be immediately fired for his “mistake”). Watch to see if @CNN fires those responsible, or was it just gross incompetence?

​Donald Trump along his son-in-law Jared Kushner has many times accused leading US media outlets of spreading fake news during the election campaign as well as after the presidential race was over.

Trump Says Realized 'How Bad, Fake' CNN is After Being 'Forced' to Watch it