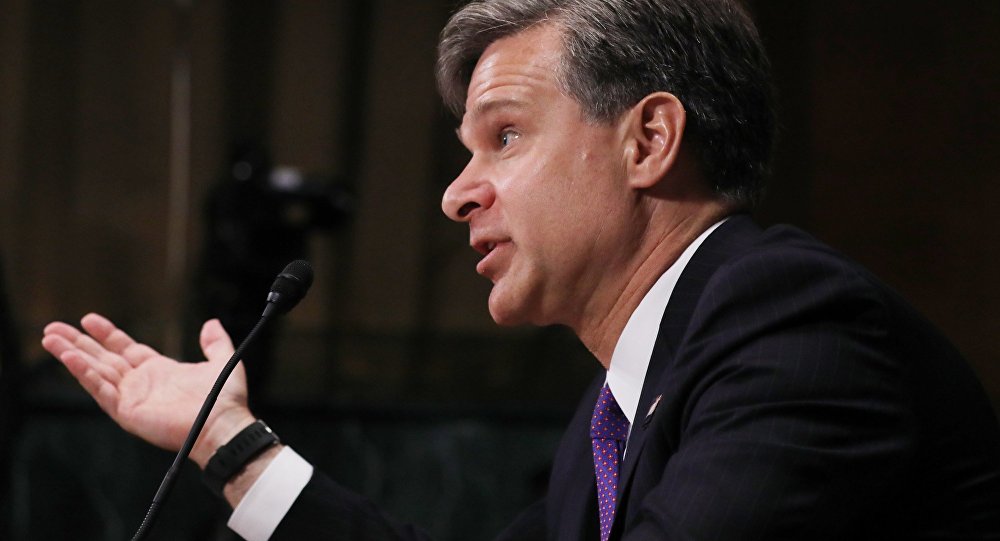 Days after US President Donald Trump, notorious for being very active on his Twitter feed, slammed the FBI, the bureau’s director responded to Trump’s attack at an oversight hearing.

Christopher Wray, who was appointed to head the Federal Bureau of Investigation by the US President just four months ago, did not hesitate to defend the agents, analysts and other personnel working to ensure the nation’s security following an avalanche of tweets by Trump, calling the bureau a biased institution, whose reputation was damaged by former director James Comey. Before testifying publicly in his first congressional hearing, Wray sent out a morale-boosting message to the agency’s employees.

Trump’s tweets followed a guilty plea from his former national security adviser Michael Flynn for lying to the FBI about his contacts with Russian officials, and were full of harsh criticism targeting the bureau, although he pointed out that he would “make it great again”:

While the officials exchanged their remarks, social media users’ opinions divided. Obviously, there are those who support the FBI and Wray, and say he is doing his best to breathe new life into the bureau:

Doing the best he can with the mess he inherited

He’s doing his best to answer as straightforward as possible without compromising whatever integrity of the FBI that he’s trying to salvage.

He just took over an agency with much deep state opposition from within, for Pete's sakes, give the man a little time to clean house.

Others went as far as to call him “just as corrupt as Comey” and to say he was appointed to ruin the agency:

Chris Wray is just as corrupt as Comey, as Mueller, as Strok. Refusing to answer questions that would show the FBI colluded with the DNC to create the fake Russian dossier. Mix that with Sessions recusing himself from his job and there is no oversight of the crooked FBI. TATTERS.

Sorry Director Wray, that internal memo would never boost my morale after being attacked by the president. The integrity of the agency you lead has been degraded and you do nothing about it. Perhaps you also have been appointed to "dismantle" this agency.

Chris Wray is another Comey! The FBI will never cooperate, we'll never get to the truth and Hillary will never go to prison. #CORRUPTION

Recently, the FBI found itself entangled in a scandal concerning Trump’s possible ties to Russia during the 2016 presidential elections and an investigation of Hillary Clinton’s use of a private server for her government email. The firing of James Comey exacerbated the situation, and made Wray’s tenure even more challenging.