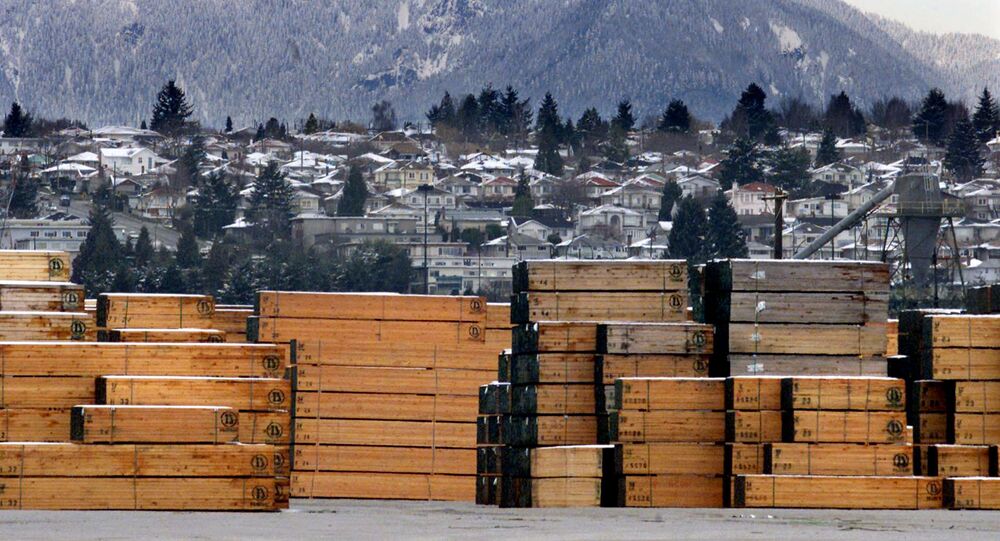 Canada to Defend Its Softwood Lumber in Trade Dispute With US

The dispute over Canadian softwood lumber dates back to the early 1980s. However, the present issue was launched as part of a Trump administration initiative to begin enforcing existing US trade laws instead of relying on dispute resolution procedures in the World Trade Organization (WTO) and North American Free Trade Agreement (NAFTA).

WASHINGTON (Sputnik) – In turn, Ottawa has accused Washington of protectionist trade measures following a ruling by the US International Trade Commission (USITC) that authorizes permanent duties on imports of Canadian softwood lumber, according to a statement from Foreign Minister Chrystia Freeland.

Freeland warned that the Canadian government would "continue to vigorously defend our industry, workers and communities against protectionist trade measures."

"As we have said throughout this dispute, punitive US countervailing and anti-dumping duties on Canadian softwood lumber are unwarranted and troubling," Freeland said on Thursday.

The statement followed a unanimous ruling by the USITC earlier on Thursday that Canadian softwood lumber exports had harmed US producers.

© AP Photo / Weyerhauser Company
US Tariffs on Lumber Not to Signal Trade War With Canada - Commerce Secretary
The ruling allows the US Department of Commerce to levy permanent duties on softwood lumber imports, according to the USITC.

Freeland noted that Canada has already filed legal challenges with WTO and under the NAFTA against preliminary duties that the US began collecting last spring.

As expected (and as usual) #US #trade panel rules against our #softwood #lumber. @BCLumberTrade will appeal. https://t.co/gDguyD9gSQ pic.twitter.com/wTK2qy2eqi

The Trump administration has launched trade actions against multiple nations under existing US laws, instead of relying on dispute resolution procedures in the WTO and NAFTA.

Previous administrations have favored the WTO and NAFTA to sort out trade disputes, a process that typically requires several years.

Canadian exports of softwood lumber to the United States have impacted domestic producers, allowing the US Department of Commerce to impose duties to compensate for government subsidies and pricing below market value, according to a final Thursday ruling by the USITC.

Imports of Canadian softwood lumber are harming US lumber producers is the unanimous finding of the US International Trade Commission https://t.co/KlBuwn8Arh pic.twitter.com/o6rPsFZZGl

"As a result of the USITC’s affirmative determinations, Commerce will issue antidumping and countervailing duty orders on imports of this product from Canada," a release explaining the ruling said.

The USITC also ruled that Canada should not be charged retroactive anti-dumping duties.

The vote by four USITC commissioners was unanimous, according to the release.