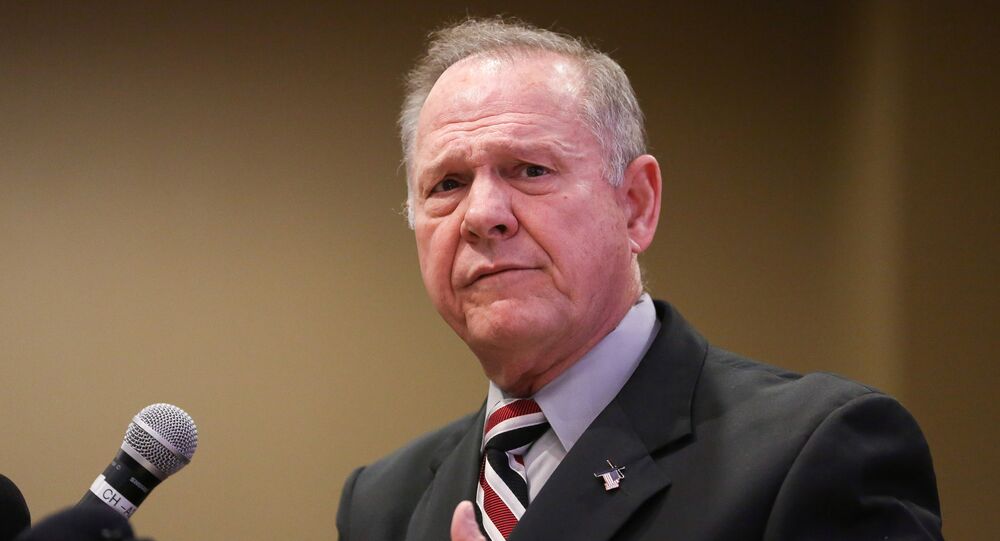 Moore, who has been accused of sexual misconduct and assault by several women, appears to have courted Kayla during her divorce proceedings, the Washington Examiner reported Wednesday.

"I was determined to get to know her, but Kayla, divorced with a beautiful little girl, Heather, who was nearly a year old, was not interested in a relationship with anyone," he wrote in his 2005 book, "So Help Me God."

However, divorce records obtained by the Washington Examiner reveal that Kayla had not even filed for divorce from her first husband, John Charles Heald, when she met Moore at the Christmas event. Kayla and Heald appear to have separated on December 1, 1984, only two weeks before she caught Moore's eye.

The court records also show that Kayla filed for divorce at a Floyd County, Georgia, courthouse on December 28, 1984. The divorce was finalized on April 19 and a permanent custody judgment was released on January 9, 1989.

According to Moore, he started dating Kayla "soon after" she visited his colleague's law office, "early in the new year" of 1985. He claimed that they dated for "about a year" before getting engaged, then married on December 14, 1985.

This suggests that that the two started dating in late 1984 or early 1985, a time, records show, during which Kayla was still married to Heald.

"That was always an assumption," a source with information on Kayla Moore's first marriage told the Examiner recently.

The same source also confirmed that Moore gifted Kayla's daughter a puppy on Valentine's Day 1985, which also suggests that he and Kayla were already dating.

Brett Doster, Moore's campaign spokesman, told the Examiner in an email that the pair did not date before Kayla's divorce was final.

"Regardless of when they met, Judge [Moore] and Kayla did not date while she was still with her ex-husband or legally married," Doster wrote.

The contradicting details that triggered the Washington Examiner to contact Moore's campaign have been described by Moore's spokesman as "really scraping the bottom of the barrel."

Four women have accused Moore of inappropriate sexual behavior toward them when they were teenagers, and one woman has come forward with an allegation that Moore initiated a sexual act with her when she was 14 and he was 32.

However, Moore's campaign has repeatedly denied any improper behavior on the part of their candidate, instead pointing out what they call inconsistencies in the details of alleged victims' recounting of decades-old events. Moore's team has challenged, for example, one woman's recollection of the exact location of a dumpster outside the Old Hickory House restaurant, where the former waitress says she was sexually assaulted by Moore.

Moore's campaign has also questioned whether there really was a phone in the bedroom of one of his accusers, whether a yearbook signature that seems to be Moore's was faked, and whether the then-14-year old girl could really walk one mile to a location he once picked her up from.

Following the allegations, many Republicans have urged Moore to drop out of the Alabama Senate race. However, on Sunday, Senate Majority Leader Mitch McConnell (R-KY), who had previously implored Moore to drop out, said that the decision will be up to the people of Alabama.
US President Donald Trump also endorsed Moore on Monday.

"Democrats refusal to give even one vote for massive Tax Cuts is why we need Republican Roy Moore to win in Alabama. We need his vote on stopping crime, illegal immigration, Border Wall, Military, Pro Life, V.A., Judges 2nd Amendment and more. No to Jones, a Pelosi/Schumer Puppet!" Trump tweeted.