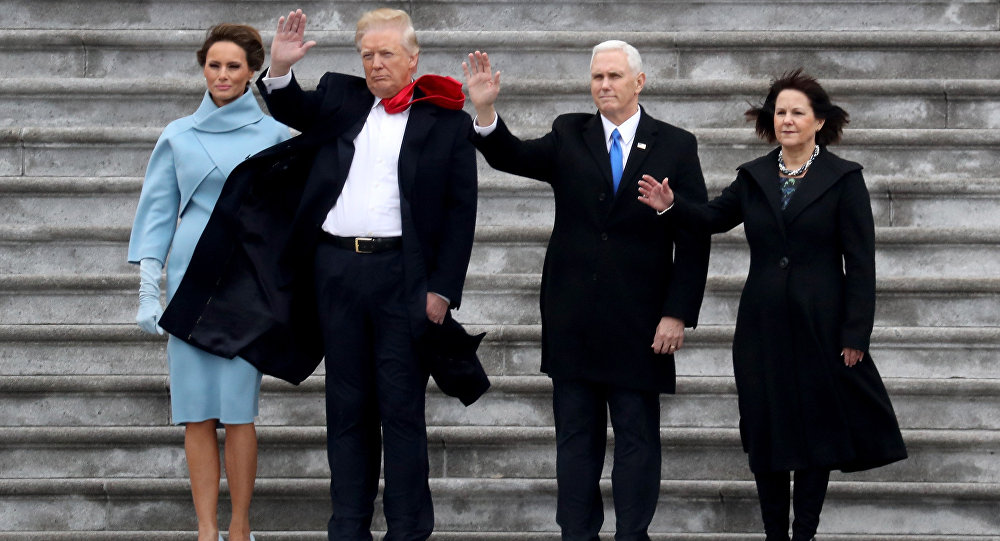 Donald Trump won the US presidential election in November last year in spite of a damaging scandal the previous month over comments he made on an "Access Hollywood tape." While the US public appeared not to hold the revelation against him, Mike Pence's wife is not so forgiving; according to a new report, she thinks Trump is "totally vile."

US Vice-President Mike Pence has shown unswerving dedication to President Donald Trump, but an aide to the presidential campaign has claimed that his wife is less enthusiastic about the US President.

When a scandal erupted in October 2016 over an "Access Hollywood" tape that showed Trump and host Billy Bush making lewd comments about women, Mike Pence was "genuinely shocked," sources told the Atlantic.

A former campaign aide said that his wife Karen was "disgusted" by the leaked tape.

"She finds him reprehensible—just totally vile," the source claimed.

The report also alleged that Pence and other Republicans planned a coup in the aftermath of the revelation, but Trump managed to deflect attention away from the matter by bringing three women who had accused Bill Clinton of sexual assault or harassment to a debate with Democratic rival Hillary Clinton in St. Louis.

© REUTERS / Mike Segar
US President-elect Donald Trump and his running mate Mike Pence address their election night rally in Manhattan, New York, US, November 9, 2016.
According to the same report, published in the Atlantic on Tuesday, Trump in turn has passed judgment about the values of his vice-president. A White House advisor said that Trump is prone to teasing Pence about his religious beliefs and other issues.

For example, "when it was reported last January that the Pences would be moving some of their family pets—which include two cats, a rabbit, and a snake—into the Naval Observatory, Trump ridiculed the menagerie to his secretary, according to a longtime adviser. 'He was embarrassed by it; he thought it was so low class,' says the adviser. "He thinks the Pences are yokels.'"

Regarding The Atlantic’s tired, false claim about the VP during the campaign — we denied this in the article and deny it again today. Didn’t happen.😴

​The news of friction between Trump and the Pences was received with interest on Twitter. Some commentators called on Karen Pence to go public with her criticism.

If Karen Pence thinks Trump is vile and reprehensible, why won't she speak out against him?

This just in! Karen Pence finds you to be vile and disgusting, reprehensible and totally vile. I am no fan of hers, but she nailed this one.

​​President Trump has recently reopened the debate over the "Access Hollywood" tape, which was filmed in 2005 and shows Trump discussing groping women. According to a New York Times report last week, despite having issued an apology for the comments, Trump now claims that it wasn't him.